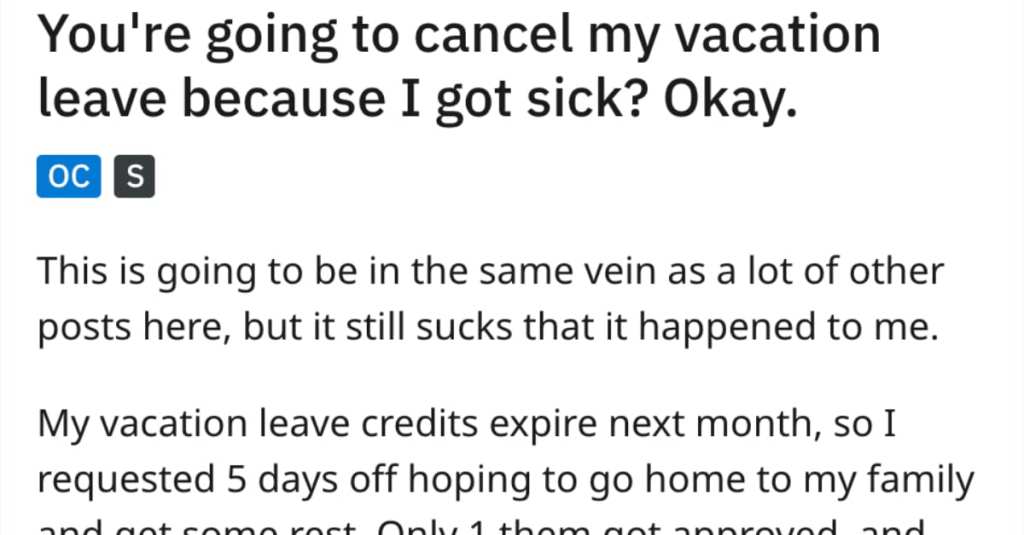 When You Treat Your Employees Like Crap, They Repay It In Kind

In a perfect world, employers treat their employees like human beings whose live and health outside of the workplace matter as much as what goes on in the office. In that world, employees would work hard for you because they feel respected and valued, so everyone wins.

In reality, too many employers treat their people like cattle and not humans, and in turn, their employees cut corners and stay home whenever they can.

This scenario illustrates that point, because when this person wanted to take a few of their vacation days that were about to expire, only 1 – in the middle of the week – was approved.

My vacation leave credits expire next month, so I requested 5 days off hoping to go home to my family and get some rest. Only 1 them got approved, and it’s in the middle of the week. Reasoning being that we’re short-staffed, as usual.

It just so happened that same week they had an arthritis flare-up, but when they called in to let them know they were sick, their employer therefore canceled their one day of vacation.

I suddenly had a very bad flare up of arthritis in the beginning of last week. I could barely sit up, and walking up the stairs to get to my workstation (I work at home) is out of the question. So I took a day off, and my boss said okay, that’s fine, but we’re going to have to cancel your vacation leave, since you’re going to rest anyway.

When OP ended up in the hospital with their intense pain and received a note to stay home for 5 days to recover, they took every last one of them, even when they felt much better before then.

It’s not like I had any rest when I was writhing on my bed in pain. Spite empowered me and I managed to get to a hospital with the last of my strength (and my boyfriend’s help) to get my fluids drained. I felt a lot better, but I was in so much pain in the beginning that my doctor seemed to take pity on me and gave me 5 days rest, and he told me to just contact him if I need more.

I was only planning to rest it out for a day or two more, but I ended up having a whole week (or more if I feel like it) to myself feeling much better. I was even able to go home. The best thing is that it’s all paid since I also have plenty of sick leave credits left and there’s nothing they can do about that.

This is what you get when you treat people like crap, employers – pay attention!

Would you have done the same thing? Or would you have sucked it up and gone back to work the minute you were feeling well?

Tell us which and why in the comments!