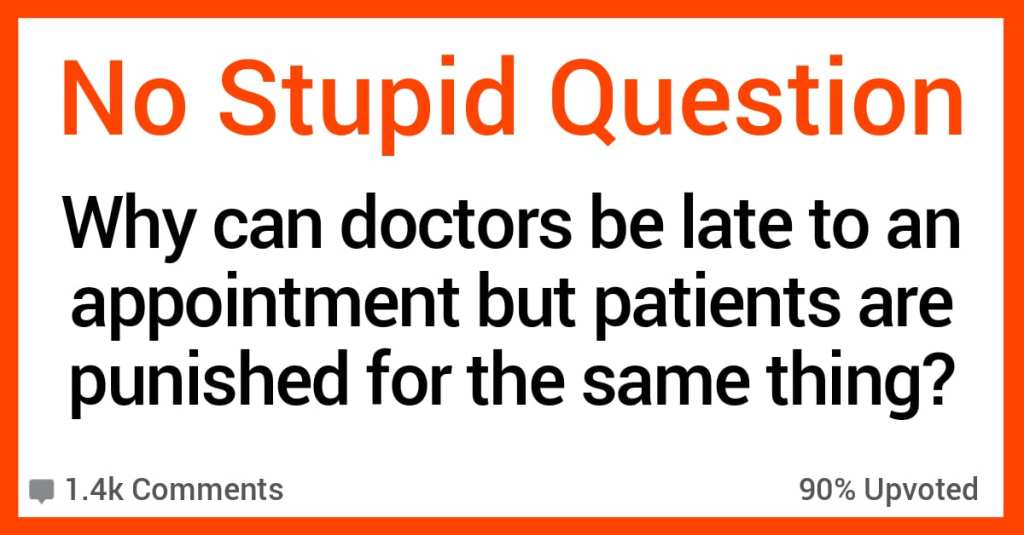 Why Can Doctors Be Late to Appointments But Patients Have to Pay for Doing the Same?

I think, in a nutshell, it’s because a) doctors really do think their time is more valuable than ours and b) your being late impacts other patients, and could make it difficult for a doctor to keep up for the rest of the day.

The only time I’ve ever really been understanding of a doctor running super behind was when I was pregnant, because obviously babies don’t keep to a doctor’s schedule.

Why is it acceptable for a doctor to take you 30 minutes late, but a patient’s appointment is cancelled if they show up 10 minutes late? from NoStupidQuestions

Why is it really, though? Am I on the right track? Totally off base? These 15 Redditors are here to let us know!

The basic answer nobody wants to hear but remains true: Because the doctor’s time is more valuable than the patient’s.

Appointment slots are a scarce resource compared to the people who want them. You show up early so reception can have your paperwork done and possibly have a brief pre-appointment check with a nurse to minimize the time the doctor has to spend with you so they can see more people in a day.

It doesn’t matter if that works out fabulously for greedy docs, it’s still true that there’s far, far more demand by patients than there is a supply of doctors.

Hence cancellation fees – to dissuade you from not taking it seriously and leaving a gap in the doctor’s schedule where someone else could have been seen if there had been enough time to book someone else in your place.

14. One day you’ll be the one who needs an extra minute.

Amazing answer. I do all I can to stay on time, but sometimes patients need more time than was allotted. Some day that patient will be you.

Also if you’re stuck in traffic and going to be late, call the office, maybe we can work someone in sooner to keep the day going. If you’re going to be late because you’re stopping at Starbucks, keep on driving.

13. They have good reasons.

There’s also the fact that the doctor almost always has better reasons for being late than the patient. The guy above already explained all the reasons the doctor can be late seeing.

Whereas with the patient being late, 9 times out of 10, it’s just personal irresponsibility. Sure, life sometimes happens, and that’s the 1 out of 10. Almost always it’s just because you weren’t responsible or considerate enough to leave on time.

There’s also the fact that the doctor almost always has better reasons for being late than the patient. The guy above already explained all the reasons the doctor can be late seeing. Whereas with the patient being late, 9 times out of 10, it’s just personal irresponsibility.

Sure, life sometimes happens, and that’s the 1 out of 10. Almost always it’s just because you weren’t responsible or considerate enough to leave on time.

I’ve walked out of a doctor’s office because they were running late a couple different times.

On those occasions I had pressing business and couldn’t spare any more time. Luckily, I wasn’t seeing the doctor for an emergency. Leaving the office probably helped them keep other patients on schedule.

Wife’s a doctor. I dont think she takes a lunch more than 3 times a month, and even then it’s get your food and go.

Also I stopped asking her what time she’d be home because with everything that goes on with late patients and charting etc, it’s always hours later.

9. It’s not so bad if someone checks in.

While my baby was having a brain bleed, he (the doctor) canceled an afternoon of appointments, just to make sure we were all ok, physically and mentally.

I will wait however long it takes. Just let me know there is something up so I just don’t think you have forgotten. I only say that because I have been forgotten.

8. You don’t want a doctor who would rush.

A good doctor will not rush through a patient that requires a bit more time.

If you aren’t that type of patient consider yourself blessed.

If/when you become that type of patient, feel blessed you have a doctor that gives you that time.

The last second bombs are always the worst.

“Do you have any questions for us? Anything regarding the NSAID use for your osteoarthritis?” No? Well glad we could figure this out today. You can get dressed and the MA will walk you to the front.” (Stands and reaches for the door)

6. Blame the other patients.

Previous patients coming in late is part of the reason that you have to wait 30 minutes for the doctor.

4. There are so many variables.

med student here. It is so variable. I’ve walked into a room thinking this patient would be in for a 10 minute basic appointment, but then spend an hour listening to their tearful story after they confide in you they are suicidal. It is very bad to rush out on a patient like that.

Other times, patients waste appointment time discussing mild headache, dizziness, and the lot, and as soon as I wrap up the visit and touch the doorknob, they speak up “Oh, and also…. [insert semi-embarrassing problem that brought them to make an appointment in the first place].” We call them “doorknob” questions.

3. Not everyone gets paid well enough to do that.

I LOVE my Rheumatologist’s office. The doctors have assistants that go into the exam rooms with them. While my doctor is examining me and going over my current symptoms, her assistant is typing everything up. If I need a med change, or maybe a referral to another specialist, it’s put into the computer system right then & there. By the time I’m walking out of the exam room, everything is already updated. The receptionist is pulling up my file before I reach her desk to make my next appointment & she doesn’t have to ask when I need to come back, it’s already in the notes.

I wish my Primary did this as well; they’re located in the same medical group building. Alas, my appointments with her take longer even though we cover less, because after she does my exam she has to go talk to her nurse, then her nurse has to come into the room and enter everything on the computer, and then the doctor has to come back in. It’s a crazy dance.

It’s multiple factors. Everyone’s appointment is different. Not everyone is going into an annual physical, saying they have no complaints, and doctor doesn’t really do any investigating to monitor health.

Patient may present late to appointment, which can push back all other appointments in the day.

Patient has a lot to discuss, which may or may not be anticipated by the provider. (And the patient may not even be talking about anything relevant, but an (older) patient who is lonely and enjoys the company of anyone who will listen to them.)

Paperwork and orders, as described by u/jingleja, is usually started and anything that can be completed promptly is. This is usually allocated into the appointment window. That is, if appointment is scheduled from 1:30-2:00, patient in ideal world may only see doctor from 1:30 to 1:45, then the rest is indirect patient care.

In response to OP, I can imagine a policy of wanting patients on time because in the event they can turn a patient away for their tardiness, this can give the provider a little break in their busy day or catch up so other patients aren’t waiting too long despite being on time.

So a lot of people are missing some crucial pieces here, but here’s the whole summary:

Unexpected things. A lot of people did touch on this. Sometimes the patient prior to you drops a bomb mid-appt or even worse, when your hand is on the door to leave. If someone is here for wrist pain and then goes “oh yeah doc…my chest hurts real bad every time I exercise.” You cannot ignore that, they could have a life threatening concern. So now your 15 min appt becomes 30.

Other people running late. I don’t mean just patients. A clinic involves a LOT of people. Patients, front desk, nurses, MAs, etc etc. If one runs late, so do the others.

Paperwork. Y’all are seriously underestimating how much paperwork needs to be done. Every single patient has to have a note typed out, a diagnosis (usually multiple) made, everything you order has to be justified and associated with a diagnosis (even things like flu shots or med reorders), every thing you order has to be confirmed as correct, meds and lab work have to be confirmed to the correct insurance, you might have to get a print out of your referrals/visit summary. Doctors work very very hard to do as much of this as they go, but it cannot always be done. Also, lots of people get annoyed if a doctor is typing while they talk, so then you cannot do any of this as you go.

They don’t make the schedule. The majority of doctors are not in charge of booking patients, they hire people specifically for that. Doctors get over booked, and because the clinic or hospital they work for cares about $$$, they make doctors see as many people as possible. Doctors usually have set amounts of time depending on the appt type, and you can’t always just add a random 10 minutes here or there. I promise you the majority of doctors would rather have more time to talk to you too and aren’t trying to just see you as a cash cow, but it is literally out of their control.

You can (technically) wait to be seen, they can’t wait to see people. Does it suck if you’ve been living with indigestion and your appointment to finally see the doctor about it got canceled? Absolutely and it’s okay to be mad about that. But nobody died from an upset stomach, and as aforementioned, late patients simply have no room in the schedule because it’s tightly regulated. If what you tell the office you need to be seen for is important enough the doctor won’t cancel your appointment. (And now you’re why the next patient is being seen late, but see 1. Unexpected Stuff)

A lot of offices still really push to get late people in. We really want to see you, and we’ll do what we can, but it isn’t always possible.

Doctors have lives too. Every late appointment makes it harder and harder to get home on time, eat lunch, pee, etc. Doctors don’t owe you their well being.

I probably missed some stuff but the way medical offices run is a pretty complex issue and while it could be handled better, a lot of it has nothing to do with the doctor. If your doctor always runs late in that bothers you, go see a new one, but I promise most of them are trying their best to keep everybody happy, including themselves.

If you’re a doctor or work for one, please defend yourself in the comments!