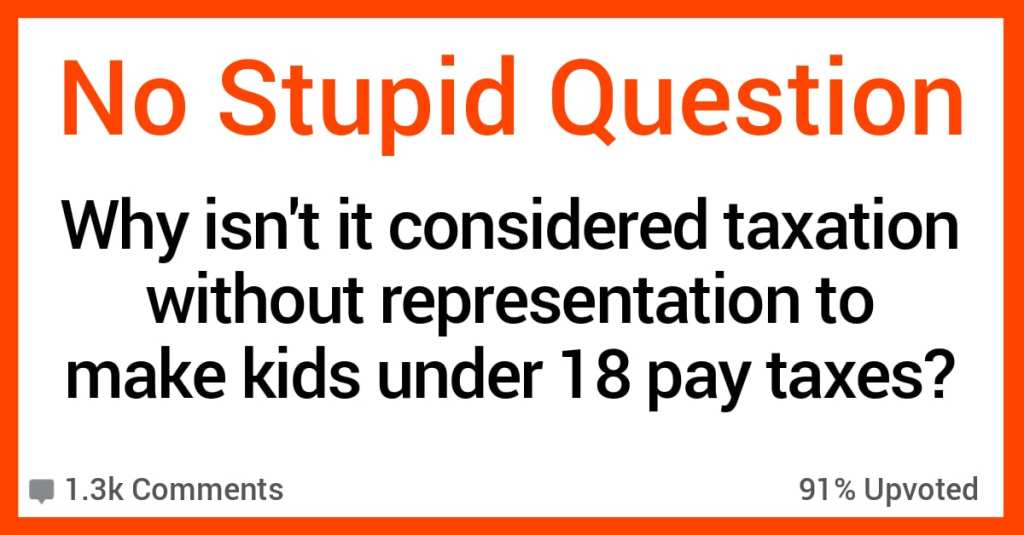 Why Do Kids Under Eighteen Have to Pay Taxes if They Can’t Vote?

If you didn’t sleep through all of your high school civics lessons, you probably remember a little thing called “taxation without representation.”

It’s one of the main beefs the Virginia colonists had with the British crown – basically, they were forced to pay whatever taxes were decided were fair in England, though the colony had no one in the government there to represent their interests.

Someone on Reddit posed a thought-provoking query recently about the concept – namely, if a kid under the age of 18 can’t vote (and therefore chose no representative in Congress), how can we make him pay taxes at his after-school job?

Why can teens under the legal voting age (in the US) get taxed? Wouldn’t that be taxation without representation? from NoStupidQuestions

Curious? I know I was – but these 16 people have some pretty intriguing answers!

If your parents claim you as a dependent you can always get your state and federal taxes back in your refund you only have to pay social security and Medicare I believe.

And if you are under 18 you probably are not paying much into those at part time jobs.

15. If you want the truth of the matter.

“No taxation without representation” isn’t a law, it’s just a slogan.

If kids payed no taxes, here are a few easy steps to tax free income:

-Employ said kid in a no-show job until they’re 18, paying them all of the company’s profits, payed into accounts you control.

Voting age used to be 21. It was reduced to 18 in 1970, the year I graduated high school, because the slogan in the streets was “If we can bleed for you, we should be able to vote for you”.

Taxes, however, are nothing more than a cost of doing business by residing in the U.S. Sales tax. Property tax. Income tax. All of the benefits that come with living in the U.S. cost money, and the primary source of that money is taxes.

It’s not unjust or bigoted or impossibly difficult to comply with, like the draft was. It’s just legislated participation in the community, large and small.

12. What about sales tax though?

Most of the time those teens aren’t making enough to actually get taxed.

There income tax gets taken out of there check but when they file there tax returns they get it back.

Just wait until you learn about taxation and representation in D.C.

Wait till you hear about prisoners being counted as constituents when they can’t vote.

You get taxed because you’re allowed to use public goods and services.

Minors use those goods just as well, they should get taxed as well.

The war of independence is a wholly different thing altogether.

Yes it would be. But we still have taxation without representation.

Residents of Washington DC and US territories such as Puerto Rico and Guam pay taxes and don’t have any representatives in Congress.

Basically after USA gained it’s independence from England, they decided that taxation without representation was okay.

Technically you are represented.

You were counted in the last census and your presence plays into how many Representatives your state gets.

As a Minor, you are still a ward of your parents, so essentially their vote is yours.

Same with a bunch of other things, you cannot enter into legal contracts by yourself..a parent or guardian would need to sign, you have some protections from prosecution, and protections against exploitation.

Basically, if you’re under the legal voting age then you have a parent or guardian that is your representation.

Of course there is flaws with this, but that’s the best way to answer your question.

The kid can be taxed because their parent or guardian represents them and theoretically will vote for the health, safety, longevity, etc. for their progeny.

That’s not always how it goes, but it’s the idea behind it.

A separate point to why you should still be taxed is a potential tax loophole and that you are already benefiting from the things that taxes pay for.

The tax loophole would be something like putting all the earnings on children to have earnings not taxed for example a child being listed as CEO and the adult listed as a consultant for minimum wage etc.

What’s f*cked up to me is, if I can’t vote in an election because I am 17 and the following year a war is started I could be drafted.

Drafted to fight a war a president I didn’t vote for started.

DC has more people than Wyoming and Vermont, and pays more taxes than 16 states. Nonetheless, we are directly governed by the Congress, with one representative who does not get to vote.

Think about how wonderful and respected Congress is, and imagine that you were governed by them, but they were sent to you by other people who neither know nor care about your community. And congresspeople don’t give a rat’s a$s what we think, because they don’t represent us.

And no, the constitution does not require this; the dimensions of the Federal district are not specified.

They do have representation, they just dont have a say in the choice of representative yet.

To be fair, parents do get tax breaks for claiming teens under the voting age as dependents.

So maybe that’s why it’s alright?

This is one of my favorite questions on this forum so far!

What do you think? Is it fair? A loophole? Let’s talk about it in the comments!