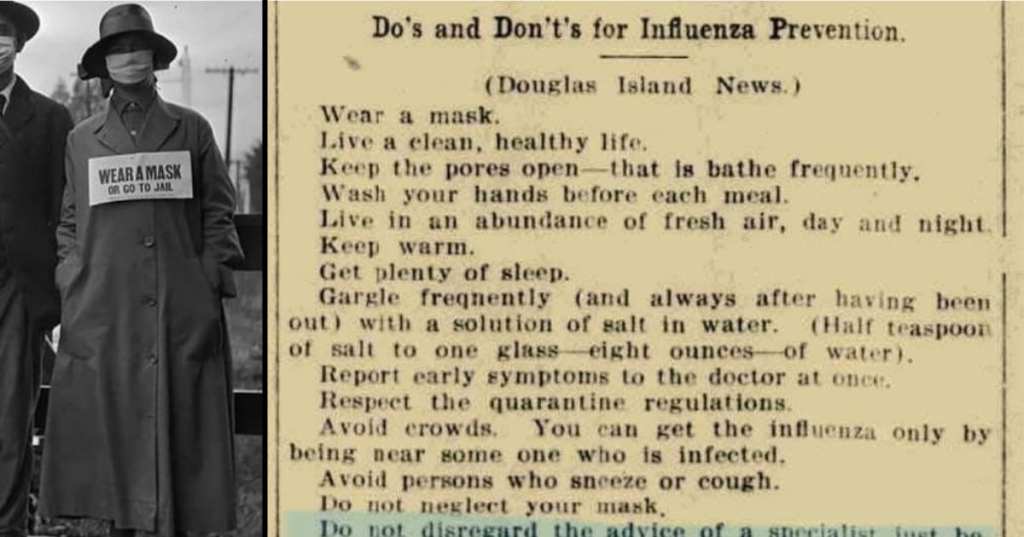 Will History Repeat Itself? ‘Do’s and Don’t’s’ From the 1918 Spanish Flu Pandemic

When it comes to pandemics, we’ve been here before—exactly 100 years ago. But have we learned anything since then?

From 1918 to early 1920, the world was held captive by a virus known as H1N1, or the Spanish Flu. Like COVID-19, it spread across the globe within a matter of months. When it was all said and done, 500 million people—about a third of the world’s population—had been infected, and approximately 50 million people died.

COVID-19 is a different virus, but the story of its spread is quite similar; people even had the same arguments about wearing masks and social distancing that we have today. The evidence is in this “Do’s and Don’t’s” lists from the 1918 pandemic that appeared on Twitter and immediately went viral.

The most important things on the list—wearing a mask, washing your hands, and avoiding crowds—are things we’re supposed to be doing today. But even 100 years ago, we had to plead with people to heed this advice and listen to scientists.

From the same era . pic.twitter.com/nAObrpuNCK

Most people complied, but a lot didn’t; there were four waves of the disease before the pandemic ended in April 1920.

You might as well use this as well. pic.twitter.com/BtfyVQZaXQ

Had they done what they were supposed to do, there’s no doubt that the infection and death tolls would have been lower, and the pandemic would have ended earlier.

It seems we dont learn from history pic.twitter.com/opoaSUuYHO

We’re still relatively new to COVID-19, and we can still mitigate the damage. While there’s no way of eradicating COVID-19, we can pay attention to science and keep ourselves and others safe.

You know what they say: “Those who cannot learn from history are doomed to repeat it.”

Are you doing all you can to keep yourself and others healthy during the COVID-19 pandemic? Let us know in the comments below!