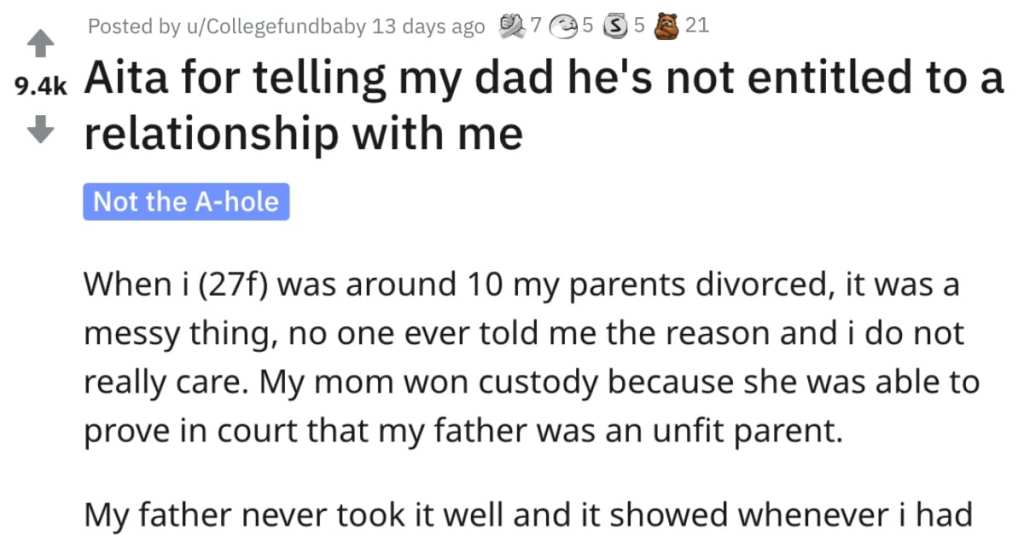 And they’re especially tricky when parents get divorced and the kids have to deal with the fallout… and that damage can last for years.

A 27-year-old woman shared a story on Reddit’s “Am I the *sshole?” page about a sticky situation with her father.

AITA for telling my dad he’s not entitled to a relationship with me?

“When i (27f) was around 10 my parents divorced, it was a messy thing, no one ever told me the reason and i do not really care. My mom won custody because she was able to prove in court that my father was an unfit parent.

My father never took it well and it showed whenever i had visitation at his house (2 weekends a month). Instead of spending time with me he would spends hours playing video games, order take out and the only time he would ever take me somewhere was when my grandma forced him, needless to say i never had a very close relationship with him

Then once i got older he started to bring up a college fund he had set aside for me and he always said that if my grades stayed up and i do well in school the money would be mine, and i did just that.

I got good grades, was part of many clubs in school and never got into trouble, i was basically the kid your parents brought up when they were comparing you to your friends.

In my senior year my dad got married to his current wife, it was a beautiful and extravagant ceremony. I’m pretty sure some of the arrangements were more expensive than my phone but whatever, i didn’t think much of it.

It wasn’t until i went to talk to my dad about my college fund that i found out he had used it to pay for his ceremony. I was in disbelief when he said it and the more he explained the more i wanted to cry, he didn’t even apologize, he said it with all causality of “Oh, you were looking for that thing you left in the fridge? Sorry, i ate it”

When he realized that i was upset he turned it around on me and told me that i was being selfish and that i was not entitled to his money.

Luckily, got scholarship that covered my entire tuition. Also, my mom and stepdad also had a fund set aside for me, they apparently knew my dad would pull that on me, so i was able to go to college without a lot of debt.

Since then i’ve been distant from my dad, i’ll not lie, i feel conned. If the money was always his, why did he bother mentioning it to me? I don’t care if he used it or not but to promise someone something, hold it over their heads for years, and not give it to them when you should because they’re “not entitled to it” is just a way too lengthy way to say that you’re an unreliable *ss in my eyes.

My dad has tried to reconcile but he still claims that i was not entitled to that money and even says that the money was not needed because i got a scholarship. The last time he said that to me was when i was at his house, visiting my new baby brother, and i got so d*mn annoyed that i said “I’m not entitled to your money but you’re also not entitled to a relationship with me so i guess we’re in a stalemate here”, i guess that hurt him because he got quiet until i left.

I’ve been remembering what i said for a while so i wonder if i was way too out of line in my statement? I was annoyed and wanted him to stop bringing it up but i didn’t want to hurt him.”

Here’s how people responded to the story.

This person said that the woman is not the jerk in this situation and that her father seems to be gaslighting her. 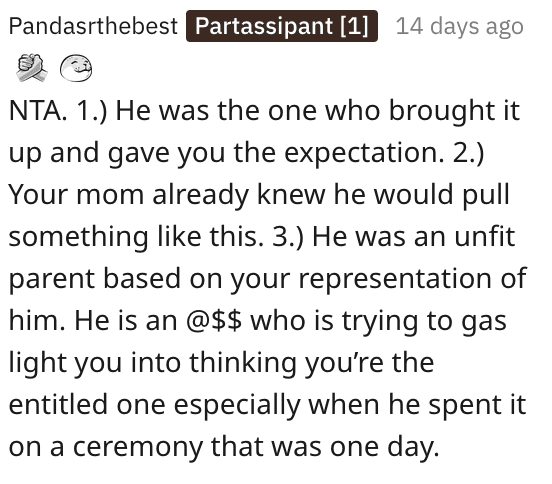 Another person argued that they could sympathize with the woman because they had a similar upbringing. 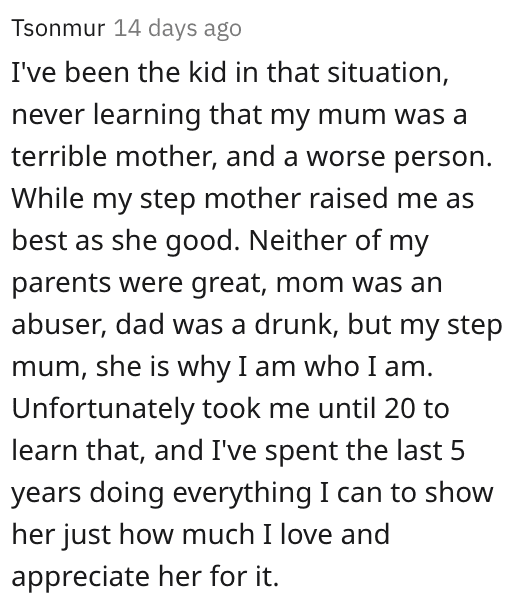 Another reader said they had a similar situation with their father and it took them years to finally come to terms with it. 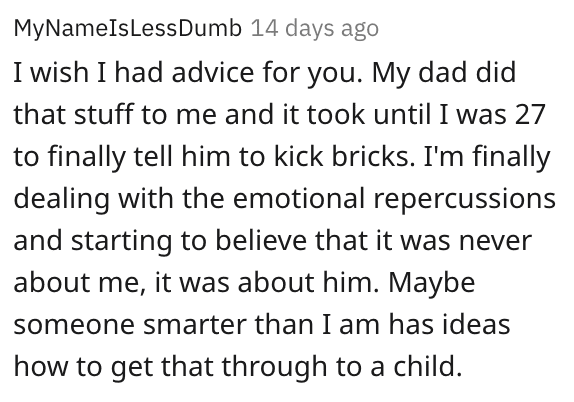 This Reddit user said that the woman’s father is clearly the *sshole in this situation for his actions and that she needs to cut him out of her life. 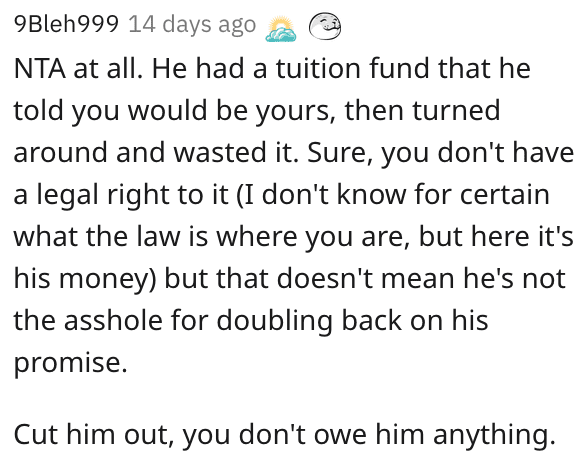 Finally, this individual said that the woman really doesn’t owe her father anything because he’s been…well, less than an ideal parent. 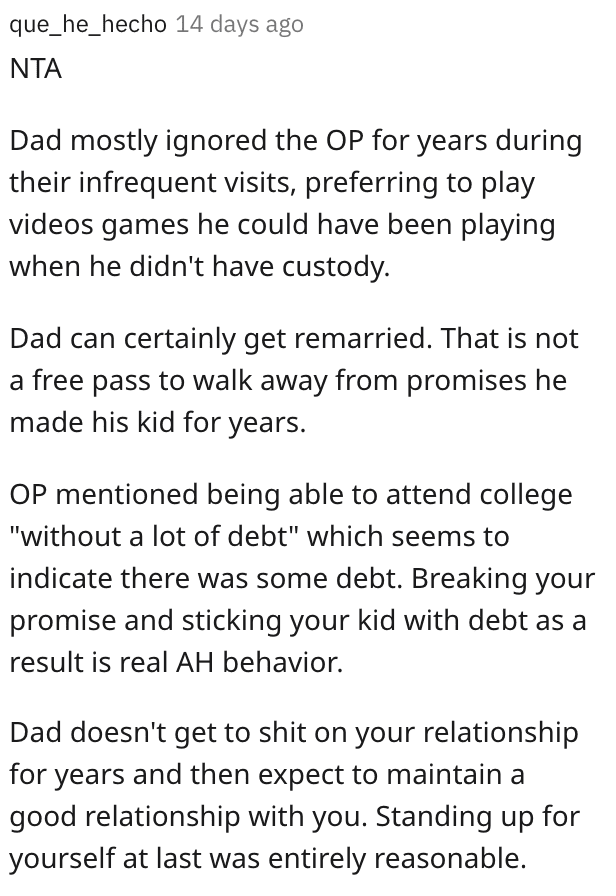 Now it’s your turn to speak up.

What do you think about what this woman did?