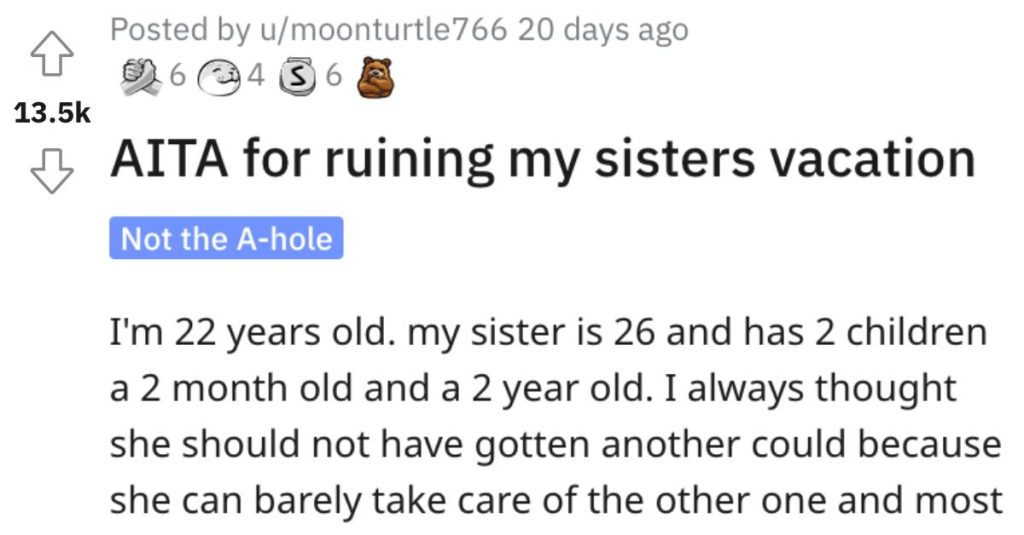 Vacations are supposed to be a time to relax, reflect, and get away from it all…

But you know what happens sometimes when you travel with your family…things can go sideways in a hurry.

Take a look at this story and see if you think this woman was wrong for ruining her sister’s vacation.

AITA for ruining my sister’s vacation?

Now for the vacation part. I booked a vacation to the beach a year ago it was quite expensive. But this is something I really wanted so i saved up for it. I asked our mom if she wanted to go with me. She said yes I booked and payed for 2 people. A month before we left for the vacation. My mom said my sister was also coming with us because her boyfriend was away that same week on a bike vacation.

There wasn’t really a question in it they just announced it. Afterwards i went to our mom and said my concerns about how i was afraid i would have no time for myself and i would have to babysit all the time. ( Something about me I’m high sensitive and i get overwhelmed very quickly by constant loud noice and being an introvert being around people mentally drained me to the point i can’t do anything anymore but just sleep. They know this)

Where now 4 days into the vacation. And everything i feared came true. I have to constantly keep my 2 year old busy while my mom and sister are on there phone or taking care of the baby.

Even when I go somewhere else to be alone for a second like lay on my bed or something he follows and keeps asking to play. I love him but it get to much for me. The only way they leave me alone is when I’m sleeping so i have been doing that a lot. With makes that i wasn’t able to do anything that i wanted.

My sisters told me today I’m Ruining her vacation because I make a long face all the time. I don’t know if that’s an English expression but in dutch it mean I’m not happy all the time.

I was so annoyed i told her what do you mean ruining your vacation i paid for it. This is my vacation. She began yelling and said that just because i paid for everything doesn’t mean I can sit here and ruin it for her. I said you invited yourself i didn’t ask you to be here. And said that they promised I would not have to babysit.

She began yelling louder and said i haven’t touched the baby while we where here (that’s a lie i have given him his bottle a few times and held him while he slept and cried plenty of times.) I told her who has been keeping the 2 year old busy. She got more angry and said isn’t that normal for you to want to play with the 2 year old as his aunt.

Our mom was looking at me like I’ve kicked the children. Because how could I complain about playing with my own nephew. They stormed out and yelled that there really something wrong with me and i should think about what i said.

I’ve been crying non stop and have no clue what to do anymore. They don’t talk to me. And I’m stuck here with them until Friday.

This individual said she’s NTA and that her sister SUCKS. 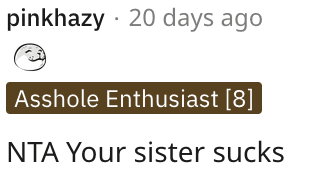 Another reader also said she’s NTA and that the mother sucks, too. 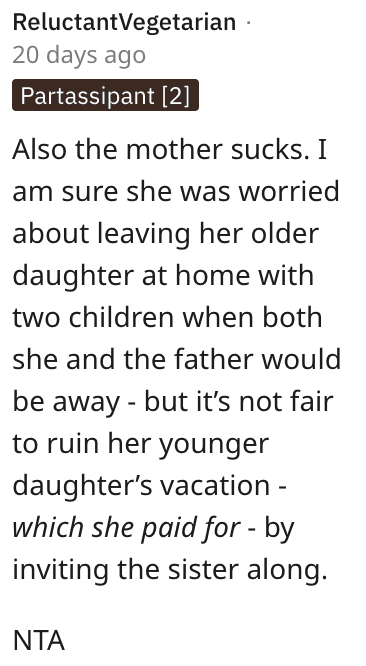 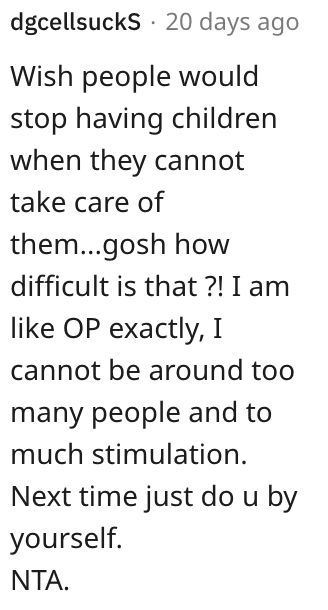