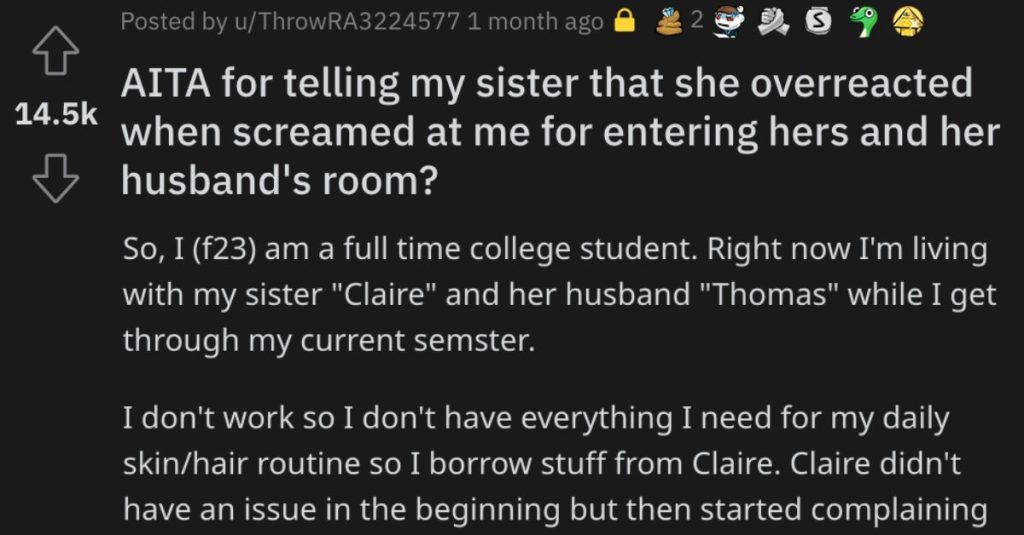 In my personal experience, if you tell someone that they overreacted, it usually doesn’t lead anywhere good…

In fact, it can lead to a lot of hurt feelings.

And this woman asked the readers of Reddit’s “Am I the A**hole?” page if she was out of line for how she treated her sister.

Get all the details below.

AITA for telling my sister that she overreacted when screamed at me for entering hers and her husband’s room?

“So, I (f23) am a full time college student. Right now I’m living with my sister “Claire” and her husband “Thomas” while I get through my current semester.

I don’t work so I don’t have everything I need for my daily skin/hair routine so I borrow stuff from Claire. Claire didn’t have an issue in the beginning but then started complaining about me randomly walking into her room but I go in there looking for the stuff I asked for.

She gave me a hard time just because I walked in on Thomas half naked to get the eye shadow I borrowed from her. and then that other time when I walked in late at night. She told me I needed to get her permission to enter the room before I take anything but I figured this would make things complicated. It’s enough that I have to ask to borrow an item.

So, last night at around 10pm I went upstairs and into her bedroom to grab the hair dryer. I walked it and woops, I saw them in an intimate position together in bed. I had NO IDEA they’re were doing it, especially since Claire told me that Thomas has been feeling sick the past 2 days. She lashed out at me yelling that I get out. I quickly grabbed the hair dryer then walked out and shut the door.

minutes later, She came downstairs in her robe and went off on me saying she was done with me repeatedly disrespecting and violating hers and her husband’s privacy. I told her it was cool, no big deal. and that I needed the dryer but didn’t have time to ask for permission.

She got even louder saying I had no business barging into her marital space and embarrassing her and her husband like this. I told her that I was sorry but she really overreacted to this whole thing. This made her more p**sed she went on about how I’m living here rent free and yet not being respectable enough. I stopped arguing and went to my room.

This morning, Thomas left the house early amd Claire ignored me on breakfast. Still upset saying I don’t get to say whether she overreacted or not and that my behavior was inappropriate. She even wants me to apologize to her husband for making last night “awkward”.”

Let’s see what people on Reddit had to say about this.

One person said she’s an a**hole and that they’re baffled she’s even asking if she is one or not. 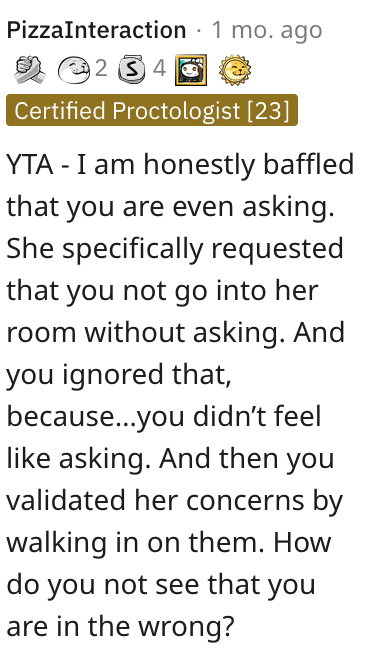 And this reader also said she’s an a**hole…to a worrying degree. 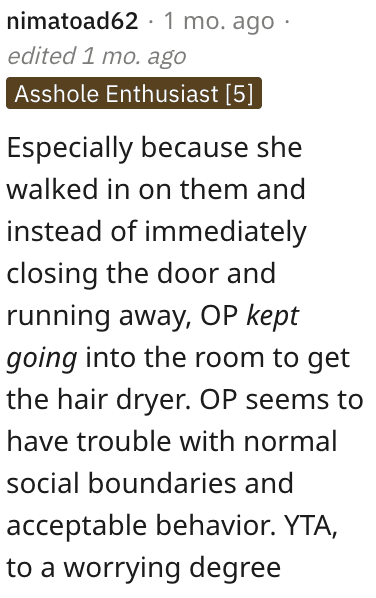 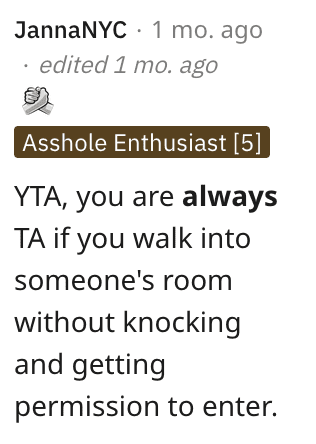