Woman Leaves Her Husband at a Clinic After He Pranks Her. Does This Make Her an A-Hole?

I’m not sure what kind of a person would pull a “prank” like this, but the world is filled with a lot of weirdos.

And I can’t wrap my head around why anyone would think something like this would be funny…but the world is a strange place.

And this woman got put in a very weird and terrible spot thanks to a cruel prank played by her husband…but she wants to know if she was wrong for how she reacted about it.

AITA for yelling at my husband then leaving him at the clinic after his prank?

“Me F28 and my husband M34 have been married for a year. Before I met him I got a dog named Ollie (A German shepherd) that was originally my sister’s but she passed away and I immediately took him to live with me.

My husband adores Ollie he sometimes jokes that he’s married to me only because of Ollie. He likes making jokes and doing pranks but some of them are downright nasty. He’d always get me worried by lying saying Ollie ran off when he was hiding him in a place I didn’t know about.

He knows how much worried and stressed out those pranks make me but he says my reaction is priceless and worth the yelling/lashing afterwards.

Ollie needed to be taken to the veterinary clinic for a check-up. My husband said he’d handle it. During the second visit to get the results. I received a call from my husband and his voice sounded like he wasn’t okay. I asked what was wrong. I got really worried after he said it was about Ollie.

I was starting to shake I kept asking what was going on and he told me that Ollie’s been diagnosed with cancer. He said he wanted me to come over to the clinic as soon as possible because Ollie was with the vet.

I couldn’t stand. I started asking is that why Ollie lost weight lately? And such. I rushed to the clinic and found my husband standing near the entrance with Ollie. First thing I noticed was him laughing hysterically telling me that I really bought in to his lie.

I was confused he said it was just a prank Ollie is perfectly healthy and handed me the results to check. After I checked I lost it. I lashed out at him. Ngl I called him awful names and his face suddenly turned red like he didn’t expect me to react that way.

He argued that I made it a big deal “obviously” and was being mean to him over a prank that didn’t even last an hour. I kept lashing out I didn’t give him a chance to keep talking I took Ollie and the keys then I left. I arrived to the clinic in a taxi. I left him at the clinic while me and Ollie went home by the car.

3 hours later he came back and was upset. He usually laughs even in serious situations but this time he didn’t. He argued that I shouldn’t have left him like that and that I overreacted. Said he was trying to make good memories to look back on and laugh at but I was unnecessarily overreacting. He stopped talking after that.

Just wanted to mention that this started months after his father’s passing. His family said he never mentions his dad nor keep anything of his although they were very close.

I never met his father but they told me he wasn’t suffering from anything and his death was sudden and my husband had a hard time processing it. This could be the reason for his behavior.”

This person made it clear: this was abuse. 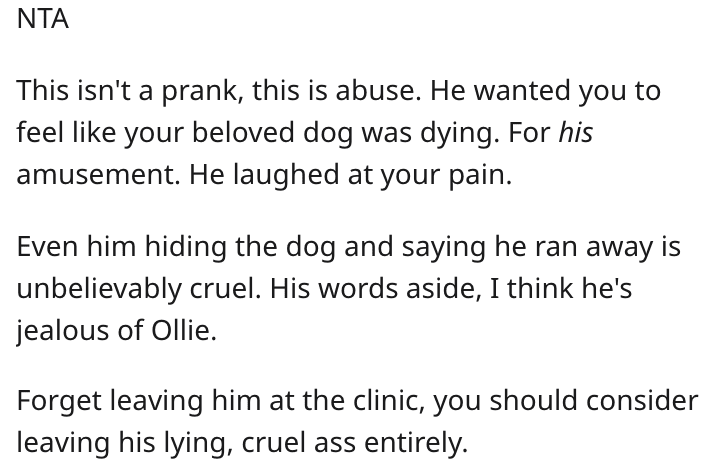 Another reader also said that this is an abusive relationship and that her husband needs some help. 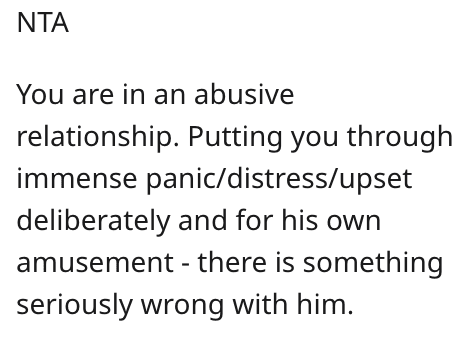 This reader said that this is gaslighting…”trying to make good memories”? I don’t think so… 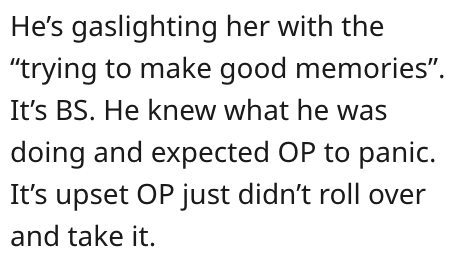 Another reader pointed out that the husband needs some serious help. 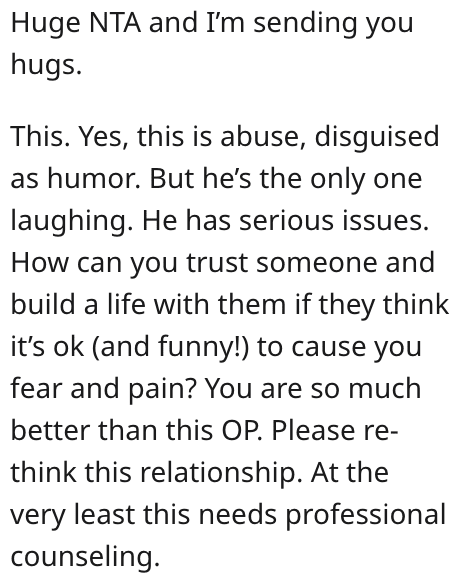 Finally, this Reddit user said there’s no doubt about it: this woman’s husband is a huge *sshole. 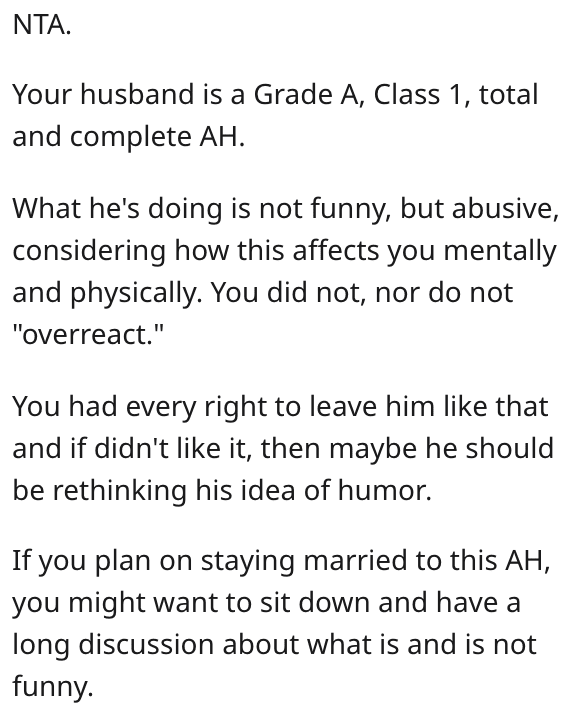 So what do you think?

Did this woman act like an *sshole, or is she in the clear?