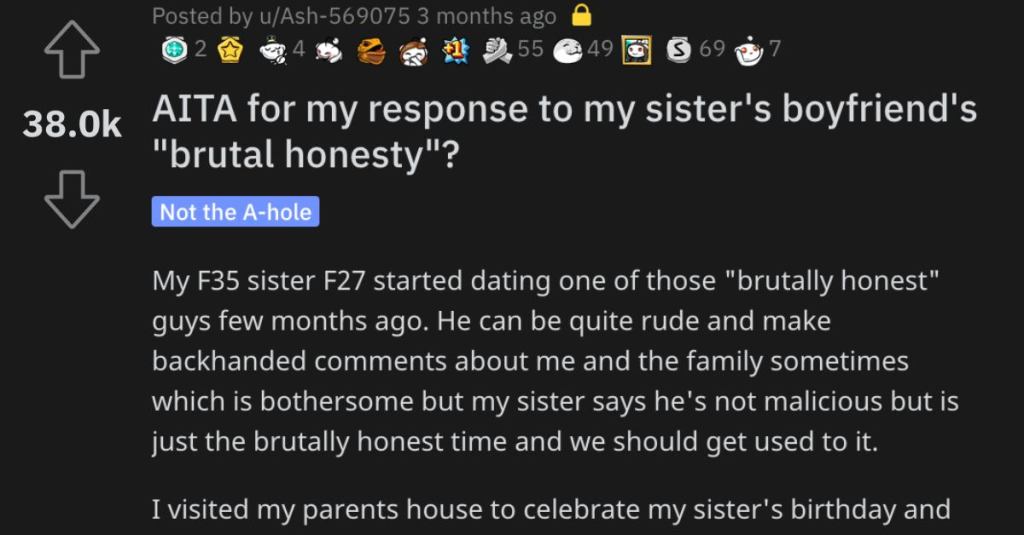 When people come out and say they’re “brutally honest” and they “just tell it like it is”, that’s usually code for “I’m an a**hole.”

At least it is in my experience…

But everyone is different and this woman asked Reddit users if she responded in the wrong way to someone’s “brutal honesty.”

AITA for my response to my sister’s boyfriend’s “brutal honesty”?

“My F35 sister F27 started dating one of those “brutally honest” guys a few months ago.

He can be quite rude and make backhanded comments about me and the family sometimes which is bothersome but my sister says he’s not malicious but is just the brutally honest time and we should get used to it.

I visited my parents house to celebrate my sister’s birthday and my husband couldn’t come with me because he was busy, after the party we all sat down for dinner and my sister’s boyfriend said it was weird that my husband and I don’t have kids despite being married for 6 years now.

I was shocked that he brought this up but I gave a short answer stating that it’s because of infertility issues, he asked on which side and I didn’t wanna answer but my sister said it’s on my side. I got uncomfortable as he looked at me for a second and said that maybe not having kids now is a good thing because he thought women over 30 might “produce” defective babies due to age.

I told him it was none of his business but he said that he was just giving his “honest opinion” and that’s all. I, in return, told him while maintaining eye contact: “trust me, if I wanted an a**hole’s opinion, I would’ve farted!”.

Literally everyone at the table bursted into laughter and my sister and her boyfriend were stunned. Few seconds later her boyfriend excused himself out and my sister followed then sent me a text after they left saying I was mean and disrespectful towards her boyfriend and insulted him maliciously just cause he stated his honest opinion.

She also said I ruined her birthday by being petty and making her boyfriend the joke of the night in front of the family. I didn’t respond but she demanded an apology via mail as soon as possible, mom agreed that I shouldn’t have said what I said and should’ve just ignored him knowing how he is.

I think AITA but I’m not sure.” 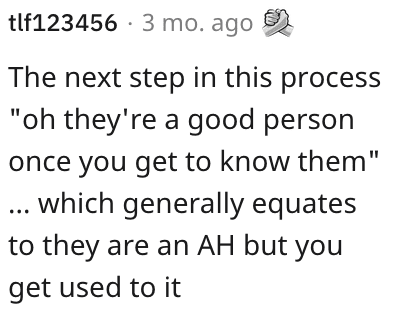 And this individual made a very good point about people like this. 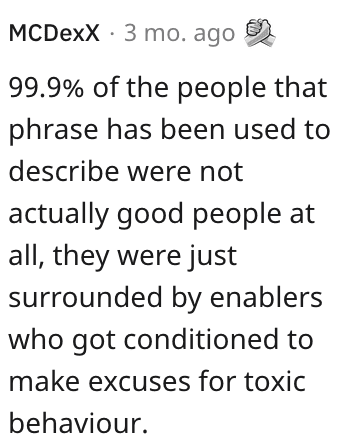 Another individual said this woman is NTA and was just playing to her audience, so to speak. 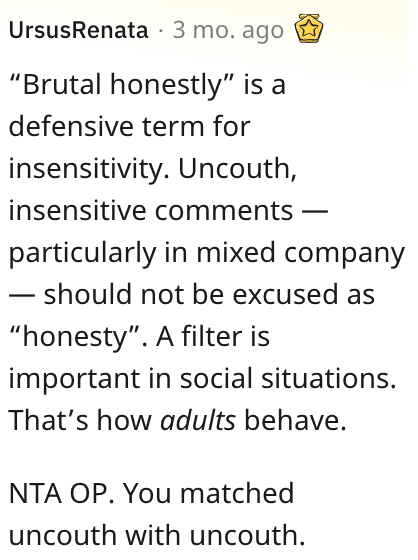