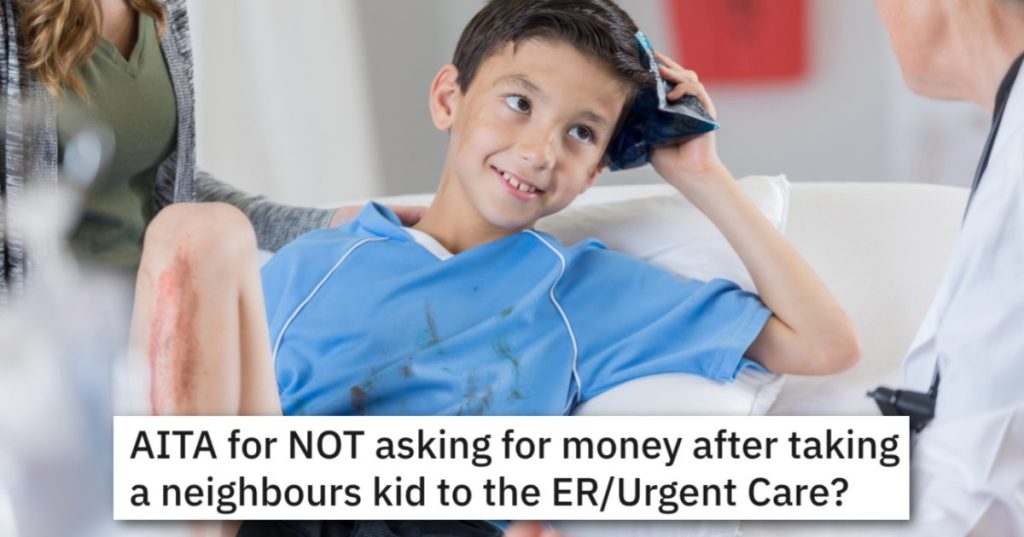 As a younger person, I never understood the phrase “no good deed goes unpunished.” I mean, we’re supposed to do good deeds, so why would someone punish me for following directions?

It turns out plenty of people are ready and willing to make us feel badly for doing the right thing – a lesson this OP learned the hard way.

The story begins with her neighbor’s two young boys needing help while their mother was at work. One of them cut themselves in the kitchen, and even though they called their emergency contact and 9-1-1, they weren’t able to get help in a timely manner.

Ok so, this happened on Wednesday & my husband is still giving me the cold shoulder. It was about 1 in the afternoon when I (33F) hear a knock at the door. I open it to see the 2 boys who live above us in a panic. 8 M was washing the dishes when they dropped a glass in the sink breaking it & accidentally cutting a large gash into their palm. Not something a simple band-aid could fix.

They ask me for help as both their mom (31F – father not in picture) & their emergency contact was were respectively at least 40-60 min away. They called 911 & had already been waiting 15 minutes upstairs for help but there was little sign of quick assistance (our emergency/medical system is pretty broken at the moment.

You’re lucky to get an ambulance within 35 minutes even if you’re experiencing a heart attack or have stopped breaking – it’s bad, so I’m sadly not surprised).

OP said she would go with them to the emergency room for stitches, and after talking with their mother and agreeing to stay with them until she could get there, she also grabbed them some food.

Anyways, I quickly get myself together, wrap 8 M’s hand a little better with a towel, call a taxi & off we go to the ER/urgent care! 16 M spoke to their mom on the way & kept mom up to date.

Mom asked me if I wouldn’t mind staying with them until she was able to get there, estimated another 30 min (ended up being 60 due to traffic) Sure, NBD, we’re on our way and everything will be ok, she can take her time. Her boys are being looked after.

The ride was only about $15 (about a 10 minute ride), and I spent another $20 on food & a treat for them both. I’m sure after all the panic they were not feeling all that great (felt better after checking at ER/UC) & getting a little food & sugar back into their system couldn’t hurt.

Mom finally arrives & is extremely thankful. I say no worries at all, happy to help. Wish them all luck & head on home (later found out 8 M had to get a few stitches but handled it like a champ).

Everyone was happy, but when she was relaying the events of the day to her husband later, he was the exact opposite.

At least, he was after OP told him she didn’t plan on asking their neighbor for repayment for her cab ride and the food she purchased.

Hubby (35M) gets home. The hellos & daily debriefing happens. I tell him about the boys & everything. He’s glad everyone was ok but goes on to ask when I’m going to ask Jenna when she’ll be paying us back?

I was a little surprised & told him I hadn’t planned on it. She doesn’t know it cost us anything & it’s not a lot of money. It’s $35, it’s not going to break our bank. It was an emergency – NBD.

He counters with how we’re trying to save for a house, car payments, all this other stuff & starts getting very hot under the collar. I tell him I’m not going to ask her but if she offers cash as a thank you I won’t decline. I’m not going to chase her down however.

Her husband is accusing her of being irresponsible, but she believes she just did the right thing, and it wasn’t that much money anyway.

He called me a “fool” & “wasteful”, & that “her children aren’t our financial responsibility”. I just rolled my eyes & walked out of the room.

I spoke to my mom who agreed they’re not our financial responsibility but also said that what I did was a kind thing & what lots of people would have done. So, sort of split the middle I guess?

Hubby is still pissed and now I’m wondering what I’m missing – Am I The Asshole?

Thank you for your opinion. Hoping to see if I have a blind spot I can’t see myself.

The top comment questions whether or not OP’s husband has a heart. 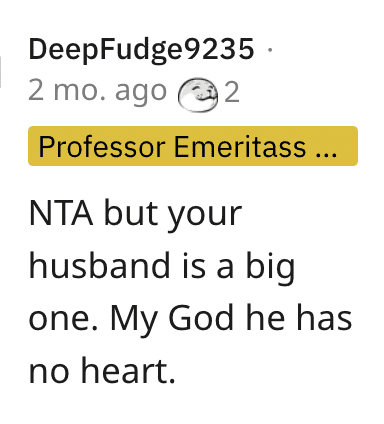 And they’re wondering whether or not there might be something her husband hasn’t told her about their finances. 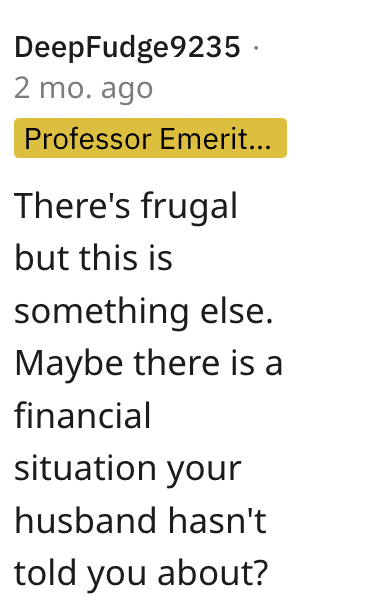 Either way, they definitely need to have a serious conversation. 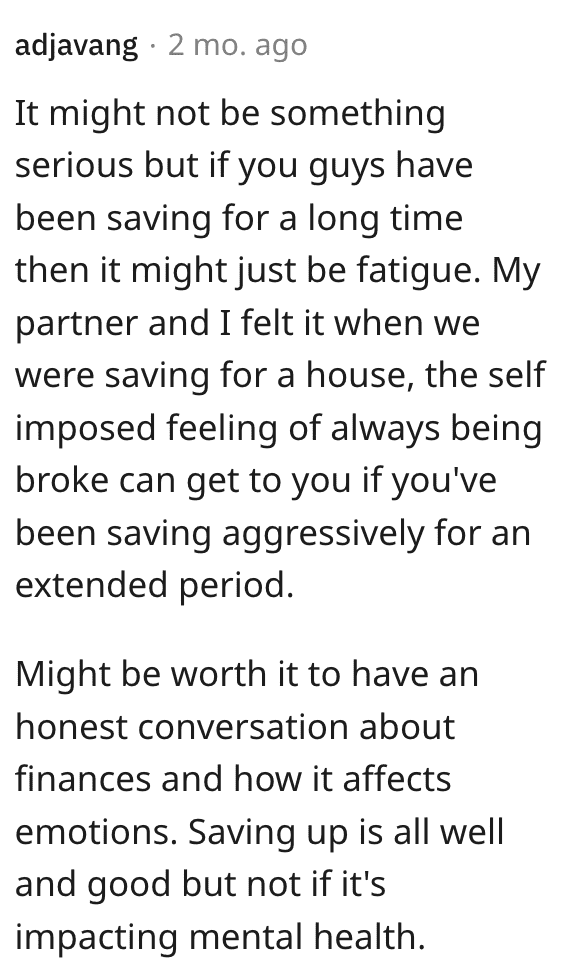 The health and happiness of kids should be worth more than $35. 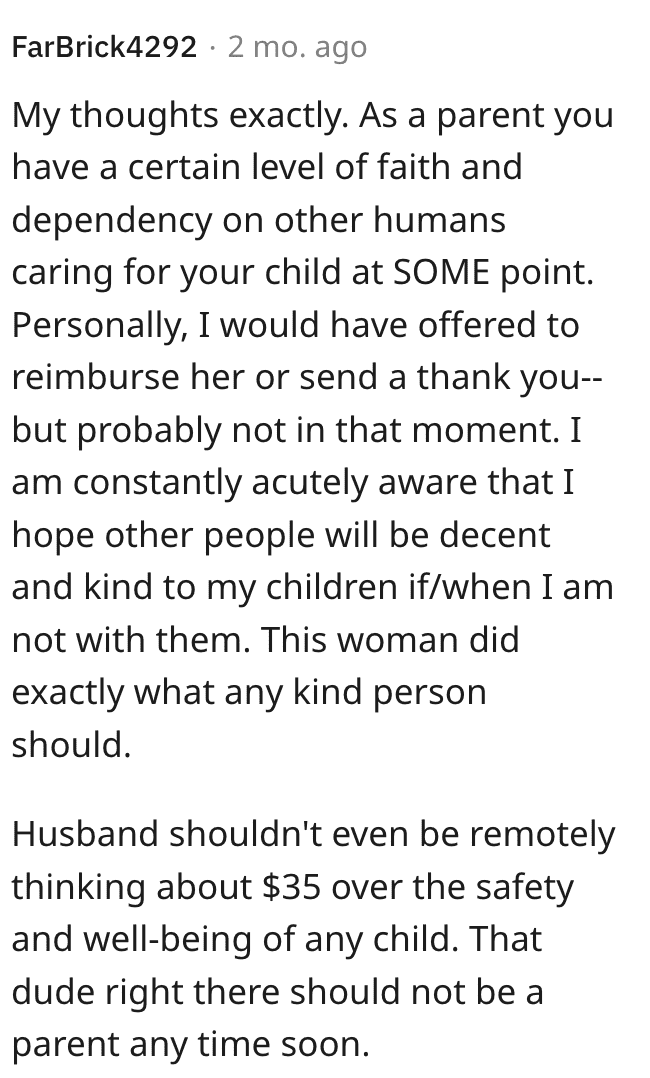 Plenty of people were wondering why he thinks this is his business at all? 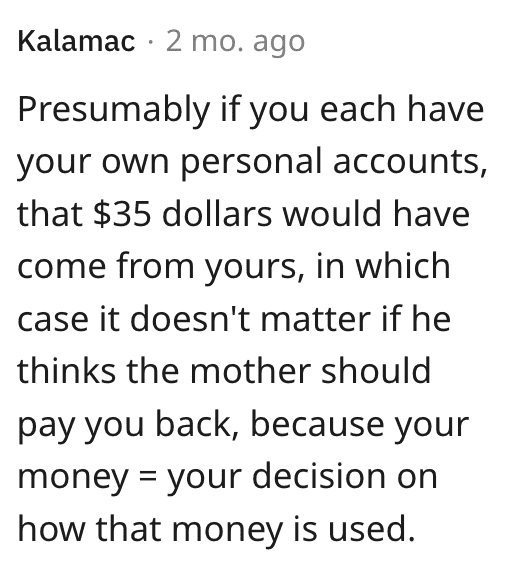 I can see why OP is concerned, but hopefully a quick conversation will clear it up.

Would you have asked this mom for repayment? Tell us why or why not in the comments!