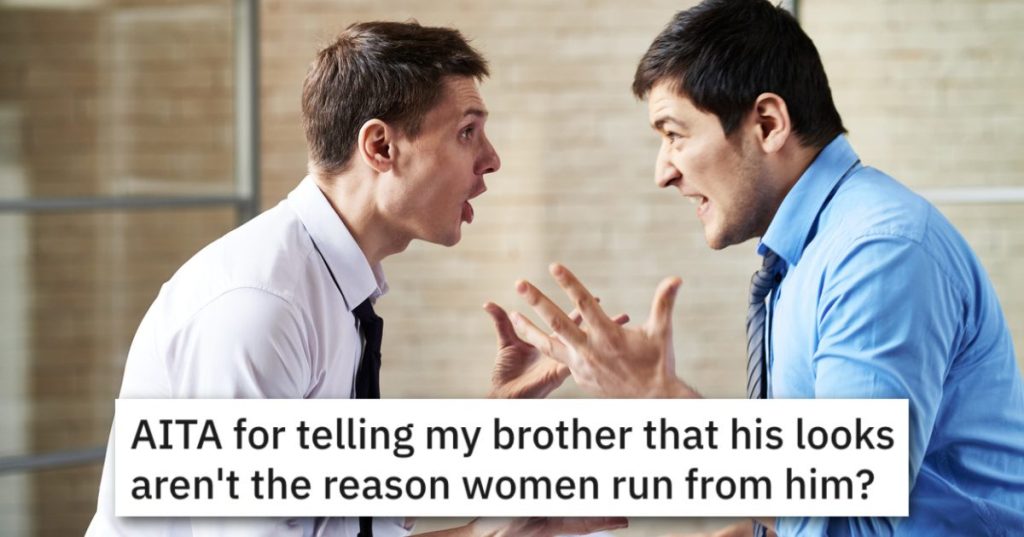 Younger Brother Decided To Tell His Sibling The Truth About Why He’s Single. Was He Wrong?

Sibling relationships are a lot of things – sometimes all at once, and other times depending on the day. If you’re lucky you get some free friends out of the deal, but the fact that you’re also family is always going to influence how you treat each other, too.

This OP is much younger than his three siblings and admits that he spent most of his childhood desperately trying to connect with one or all of them.

The one he feels the closest to is the one nearest his age, and the two of them have a penchant for physical fitness in common.

Now, Jake has always been interested in sports and all, training since he was 14 and went pro in college, so even at 32 he looks like a young Schwarzenegger and I took after him because he was the sibling at home who I was actively watching, I mean I was young and desperate for interacting with my siblings, so I did a lot of needy things.

I took baking classes with Diana, I watched every stupid Star Wars movie so I could talk to Sebastian and I became The Rock at 18 for Jake.

His next-older brother complains often about his looks and his inability to get dates, and makes fun of his two younger brothers for what he sees as an obsession with fitness and muscles.

It’s caused the two of them to not be close at all, but that’s just the way it goes sometimes, right?

I’m not that needy anymore, and I never really talked with Sebastian, he claims the reason people (and mostly women) reject him are his looks, I mean he’s okay, a little bald a little overweight, but also very very grumpy and noisy.

He thinks Jake and I are stupid just because of how we look (he really doesn’t have another reason, Jake has a PhD and I’m top of my classes, but we’re stupid because MuScLeS).

I’ve been laughing at his disrespect and resent for years, but now that I’m a bit older, I just cut him off and move away from him, it’s sad because he’s my brother and I want a relationship, but meh.

Recently, the older brother messaged OP’s girlfriend with inappropriate messages. She did not respond and neither of them chose to confront him about it, either.

I was in an OR with a guy and a girl because I don’t want anything serious in my 20s, and a few months ago, my girl had to pick me up from my parents house and I ”introduced her” to my family, next day she said that Sebastian sent her the most unf*kable messages on fb she has ever received in her life.

We agreed to not tell him anything because she said she didn’t cared and that was all.

After OP ended up moving home for a bit – where the angry older brother also lives – the two of them got into a thing about how OP must be a real loser because he couldn’t even keep his relationship with his “fit” body and stereotypical good looks.

OP lost his cool and told his brother that his appearance has nothing to do with why women don’t want him, referencing the creepy messages.

I broke up with them and removed myself from the house, I’ll be living with my parents for at least a month until I find another apartment.

Sebastian is also living here and when I went through the door, he laughed at me, calling me a ”kicked out Chad” and that even when I look ”like a little Jake” I still got broken up with and now I know how he feels when people reject him for his looks, but that ”it’s better” because my looks are the ”fuckboy stereotype.”

I just rolled my eyes and said that his looks aren’t the reason women run from him but rather his creepy personality and to remember the texts he sent to [my ex] a few months ago.

His mother thinks they shouldn’t kick the older brother when he’s down, but OP isn’t sure he made a misstep.

He got red in the face and my mom said that I was rude because Sebastian is already having a bad time being his age and living at home.

What about Reddit? Well, they’re weighing in with these comments!

The top comment (and many that followed) were obsessed with his mom’s backhanded roast. 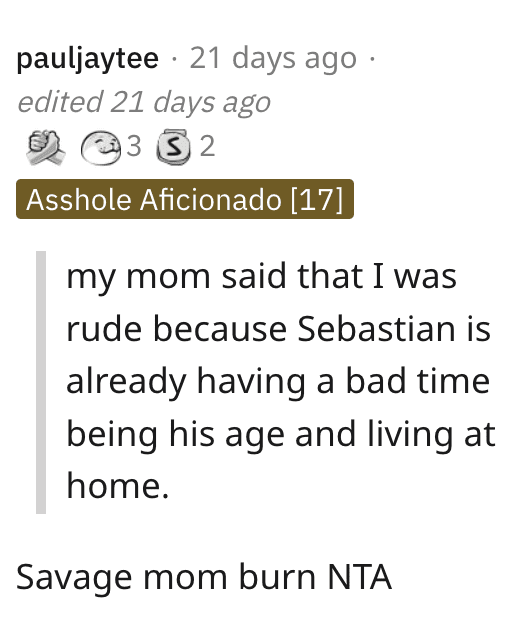 No one has any sympathy for the creepy brother, that’s for sure. 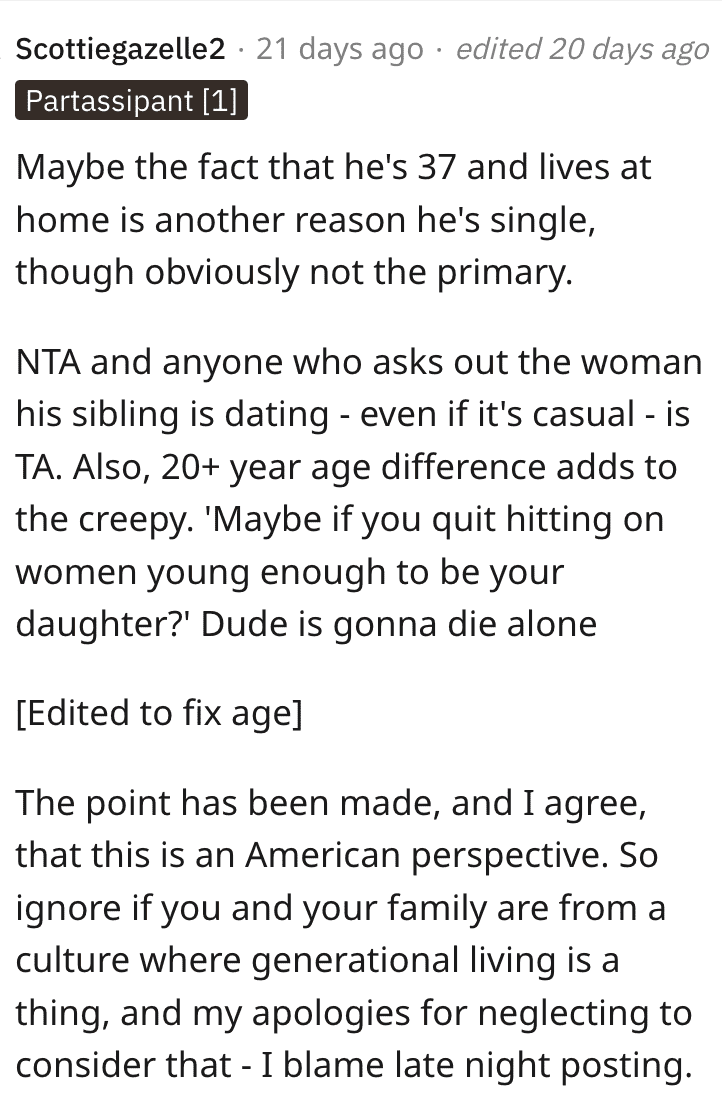 And no, living at home in this day and age does not automatically make you undateable. 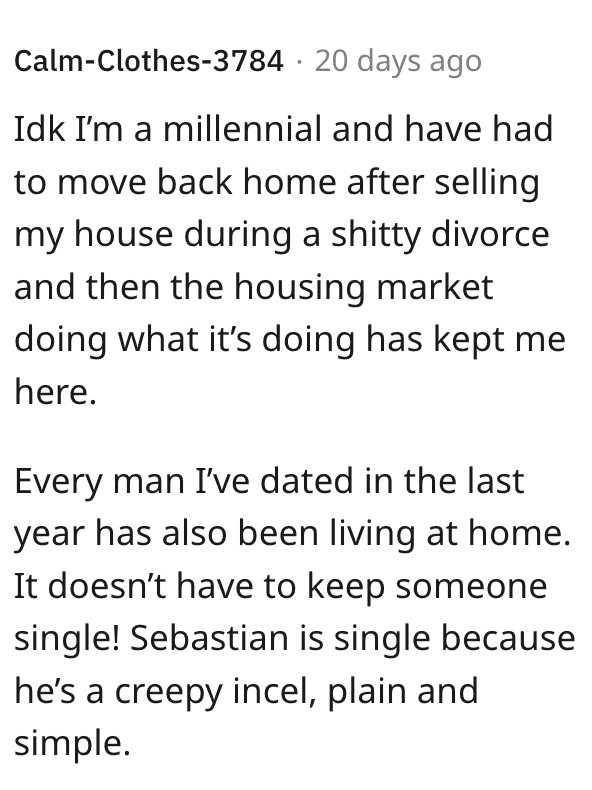 He just is the way he is (and that’s probably why he’ll always be single). 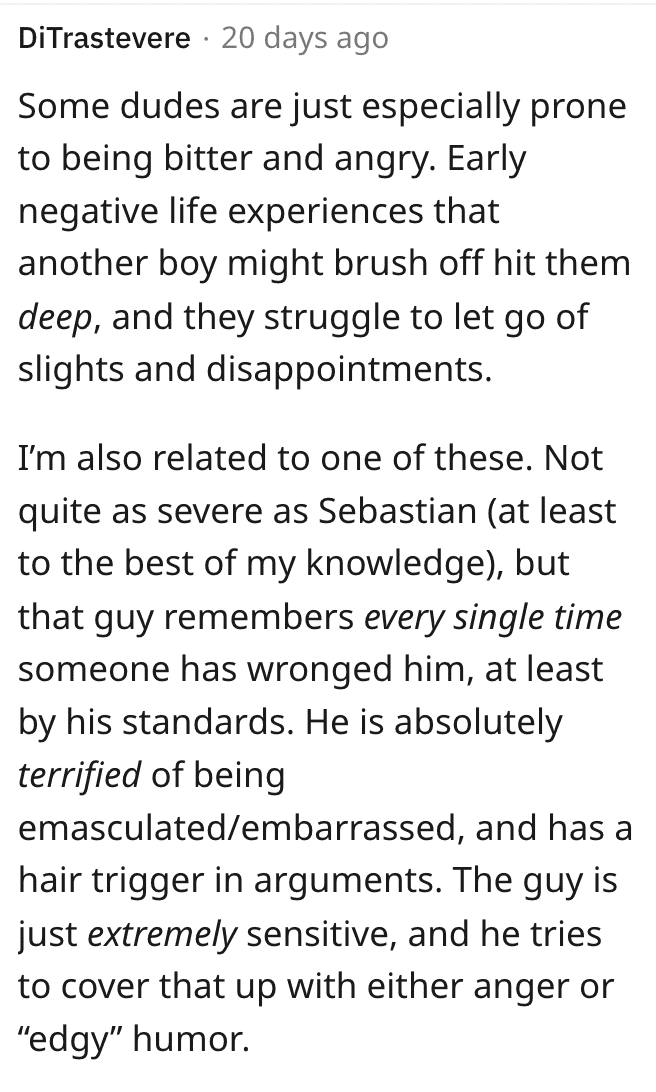 Here’s to hoping OP gets to move out soon. 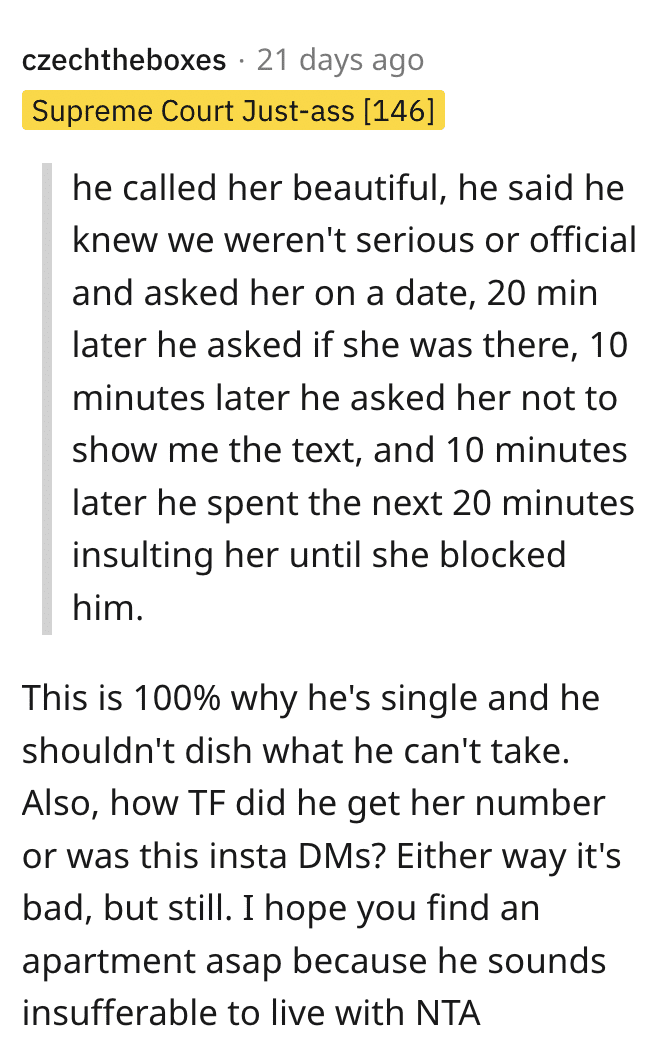 This guy sounds like a real peach, and OP will probably be better off with a minimal relationship.

What do you think? Should OP have handled it differently? Let us know in the comments!