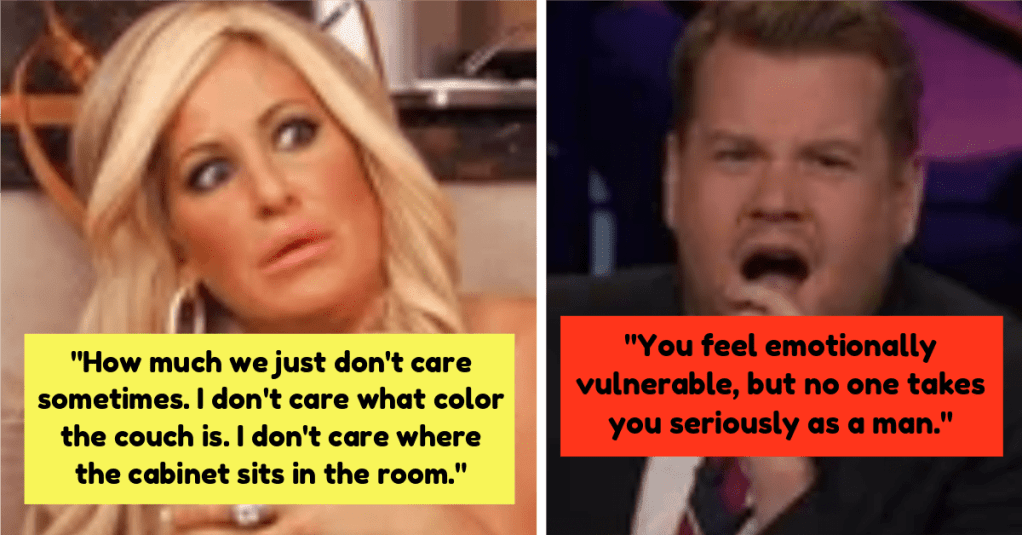 12 Men Talk About What They Think Women Will Never Understand

Those are FACTS, people.

And today we’re going to focus on the second category.

Take a look at what AskReddit users had to say about this.

1. Nothing going on in there.

“The absolute real ability to actually not be thinking about anything at all.

I always have to come up with some made up thought.”

“You can feel emotionally vulnerable, but no one takes you seriously because you’re a man. When I see women telling someone to “man up” it makes me so angry.”

“How much we literally just don’t care sometimes.

I don’t care what color the couch is, I don’t care where the cabinet sits in the room. You’re gonna make me move it regardless, don’t ask me where I want it ’cause I don’t want to move it in the first place.

Just tell me where and I’ll put it there for you.”

“That when you say “happy wife happy life” it makes every guy in the room cringe at how unfortunate your husband must be.”

“I just went out Christmas shopping with my wife’s niece’s husband.

Both my wife and her neice were worried that we wouldn’t get along because he’s very spiritual and I’m an atheist.

I just told her we just talked about other stuff- cars and sports. It’s not hard for guys to get along.”

“The fear of your child not really being yours.

Or the pain of finding out for sure.”

Sure, you may have had s** with one, but the failed positions, pressure, etc…. it sucks.

Yes, I’ve been married a long time, learned to live with it, etc, but it still sucks.”

“Being ugly means that everything you do is creepy, but if you’re good looking, nothing is.

Friendly customer service? Not if he’s ugly. Just creepy and trying pathetically to hit in you.

If he’s hot, creepy becomes dangerous and dark and s**y.”

“When I go shopping, I find exactly what I need and I leave.

I don’t like browsing through the store, looking at other stuff, looking at sales, or just being there.”

“Sometimes when a guy is interested in you…it’s not because he wants to just get in your pants. Maybe he actually likes you. Shocker, I know.

Conversely, if a guy doesn’t like you, it is NOT always because there’s another girl, or there’s something wrong with him.

He may have opted to sort his life out first before participating in the clown show that is modern dating.”

“The unspoken competition between men.

This ranges from the dumbest of things like fighting over a girl to something minor like your performance in a video game.”

“That when you’re telling me the 25 minute story of how your friends niece tripped on the stairs before her dance recital but still pulled it off all I’m doing is nodding my head and wishing the sun would finally explode.”