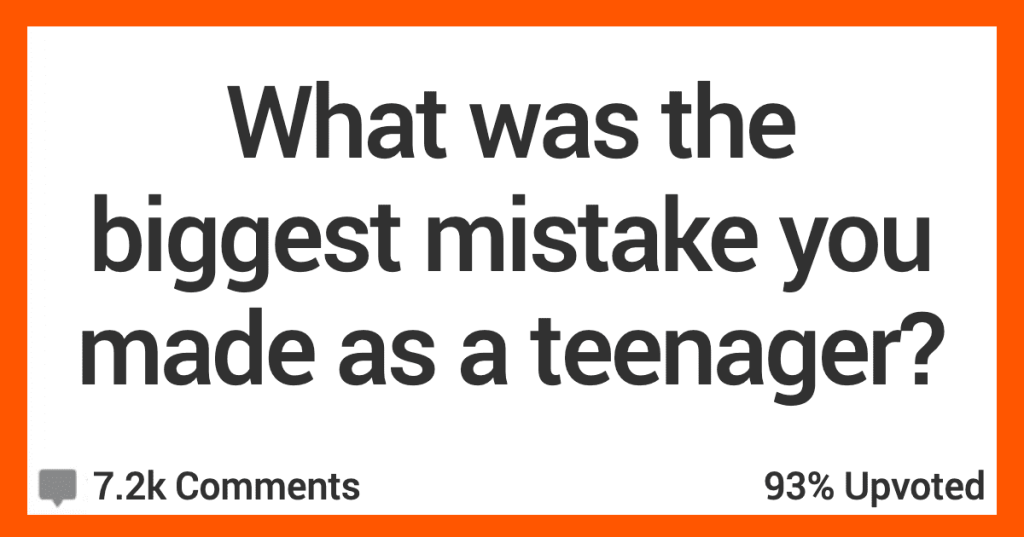 12 People Admit the Biggest Mistakes They Made as Teenagers

You were young and dumb once, too, remember?

And frankly, I’m kind of surprised that some of my idiot friends and I weren’t seriously injured or ended up in the morgue when we were in high school because we were raving lunatics and we did A TON of stupid and dangerous things.

But we’re all still here!

What was the biggest mistake you made as a teenager?

People shared their stories on AskReddit.

“Not realizing that my parents weren’t doing the best job raising me/preparing me for adulthood and realizing I should maybe take matters into my own hands.”

“I took my uncle’s beautiful restored classic car for a drive when I didn’t have a license and got it impounded.”

“I did not rebel.

My parents incessantly accused me of rebelling and general debauchery despite being in a huge club sport on scholarship, being involved in school councils, having extra curriculars like orchestra, and art (which I always won awards for), having a 3.6 GPA, being the first in my family on track to go to a huge university, etc etc etc.

I spent my high school life hopping in between crying, self-loathing, and suicidal ideation when I could have been having fun and enjoying my childhood. I spent too much time wondering why my parents didn’t love me instead of doing something about it and refusing to respect them.”

“I was a rather negative person as a teenager, but tried to play it off as sarcasm instead.

I somehow had grown into this weird bubble where I made fun of almost every little thing, but didn’t really realize that I was also hurting my friends by doing that.

I did lots of growing up after high school, and I’m a bit sad about not keeping in touch with my old friends. They might have liked me more today than they did back then.”

“Not being more sociable.

“Getting addicted to pills, specifically oxycodone which led to a ten year her**n addiction that I’m just now 7 months clean from.”

“Trying to be more mature.

Since childhood, I prided myself on being an extremely smart person who was above things like “cartoons” and “playing”. Of course, I still liked those things, but I desperately tried to hide it even though literally nobody actually cared. While everyone my age was dashing to tab away from p**n, I was tabbing away from Minecraft let’s plays.

Even though I’m older now and know that people don’t care, I still find myself tabbing away from cartoons and pausing games when people try to see what I’m doing. That instinct is still there. I usually just force myself to resume what I was doing, but I feel like I’d be better off if I didn’t have the desire to prove myself to others as a kid.”

“Being afraid of girls.

Didn’t realize that they were normal humans too, who just wanted to have fun and be liked.

They were mysterious and scary, and I lost a lot of years being self conscious and shy.”

“Looking back at the way I treated this one girl.

I was cruel and thoughtless.

“My biggest teenage mistake was not being kind to myself. My teenage years were some of the hardest in my life( hopefully).

It wasn’t until recently I could start looking back and realized that it really wasn’t my fault. I did a lot more than most would have in my situation. And that even though I had terrible teenage years, its not a reflection on who I am, but more a reflection on what i was going through.

It makes comming to terms with losing out on that part of your life much easier. And I wish I had this mindset much earlier.”

“Marrying my 18-year-old self to a 40-year-old who’d been grooming me for three years, just to spite my mother.

“Back when I was just a young hoodlum I was out for a very late evening drive.

Nice cool air and my car was making good power. Which for a turbo 5.0 Mustang is quite a bit of power. I was cruising at 100 mph+ with occasional jaunts to much higher speed.

Came up to a town and saw a police road block. About the same time I saw lights about a mile behind me. I was pretty sure they couldn’t have ID’d me by that point so I took off. Did a little fancy driving and gave them the slip…..for awhile. Long story short it came down to wrecking my car or giving up an I decided to give up.

Felony fleeing the police in a motor vehicle, reckless endangerment and a couple other charges is what I ended up with.

Now I’m 33, I’m an engineer, married to a wonderful man who unfortunately I am not able to have children with. We looked into adoption, but with one of us being a former felon it’s a bit of a nonstarter.”

What were the stupid things you did when you were young?