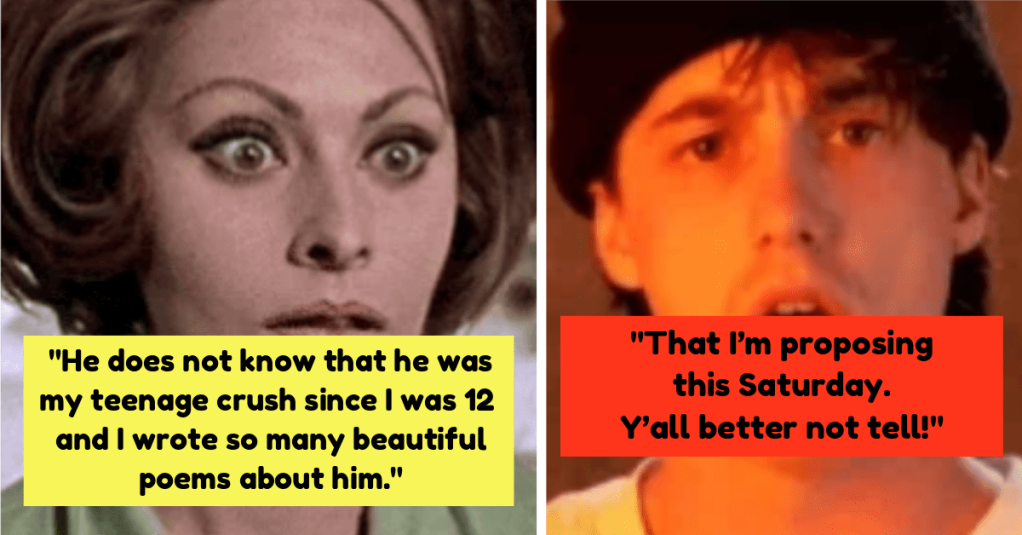 We all have secrets.

You. Me. Your parents. Your friends.

And even your partner.

And today we’re about to get a dose of reality from AskReddit users who admitted things that their significant others don’t know.

Let’s see what they have to say.

“That I’m proposing this Saturday.

“If he’s out of town, I go completely feral for the first one or two days.

Candy for breakfast, falling asleep in the couch, beer with dinner on a weekday, clothes on the floor, recycling bag overflowing…

Then I shape up. When he comes back everything’s back to normal. But man does it feel good to be a sloppy pig sometimes.”

“For a period of time when we were toddlers he lived directly behind me. He remembers a little girl coming outside like twice (I h**e the outdoors) and loves the fact that it was his future wife. He tells the story all of the time.

At the age he mentioned, I didn’t live there. I was a bit older when we moved in. It was another little girl. Wish I did though. The story makes him so happy so I will forever be that little girl he saw in her backyard a couple of times when we were 3.”

“He does not know that he was my teenage crush since I was 12 and I wrote so many beautiful poems about him.

We have been married for 6 years and have a child together. I don’t know if I will ever have the courage to tell him that I have always loved him.”

“Sometimes when my wife and I get drinking she’ll start to reminisce on how terribly she had the hots for me in high school.

I was a guitar player in a band, long hair, scrabbly 90s goatee, leather jacket, and she she bought into that s**t hard. I had no idea that she’d spent months mooning and working up the courage to talk to me, mostly because I was actually a computer nerd and super awkward around girls. (Still am, for that matter.)

The point is that I never get tired of hearing about it. I slurp those stories up; they’re like crack. Tell your dude and you won’t regret it.”

6. A little something extra.

“Boyfriend has financial struggles, not because of anything he’s ever done.

His mother is mentally unwell and his father can’t work for various reasons. He’s been the sole provider for his family since he was a teen and has to balance his job on top of being the top 5% in his university cohort to maintain two scholarships.

He had to put his mom in a psychiatric hospital by himself when he was 19. He had no support from relatives except his grandma, who doesn’t have an income herself but tries her best. He currently is raising his younger brother and paying rent for the both of them. He acts strong about it but he gets “financial panics” very very often.

In comparison, my family isn’t rich but we’re definitely lucky enough to be comfortable. My parents pay my tuition, but I still work part time (teaching) because I don’t get any pocket money and I also enjoy it. I’m a very frugal person though so a lot of it just gets saved up.

So, sometimes I secretly transfer some money into his account. I pretend to “borrow” his phone and delete the SMS notification off of it. He’s never noticed. It’s not a lot of money but I like to think it helps him get a little bit of extra something.”

“How to clean the oatmeal dish.

Always leaves visible chunks and THEN hangs it up like it’s clean!!

She has a PhD in chemistry…”

“I try to give her the “better half of life”.

If there are two pieces of pizza left and one piece is burnt, I’ll take the burnt one. She gets the good piece.

If I’m going to shower and there’s one normal towel left, I will use a hand rag or something to dry off — she gets the towel.

If there’s that unwanted end of the bread loaf, I’ll make myself a sandwich using that sad end piece . I’ll then make her sandwich with the good pieces .

I do this all the time for the smallest things. She never knows.

I try to make her life better in those small ways.”

“That her mental illness is k**ling me!

I just wish she could be free of it, for both our sakes.

I h**e seeing her struggle so much!”

“That I knew he was planning to propose to me but I still acted surprised.

He is so proud of the idea that he managed to surprise me.”

“I put “no salt” salt into his salt shaker he keeps on his table near his video games. He is notorious for over-salting his food and has high blood pressure.

I’ve been doing this for almost 4 years now. He can’t tell the difference.”