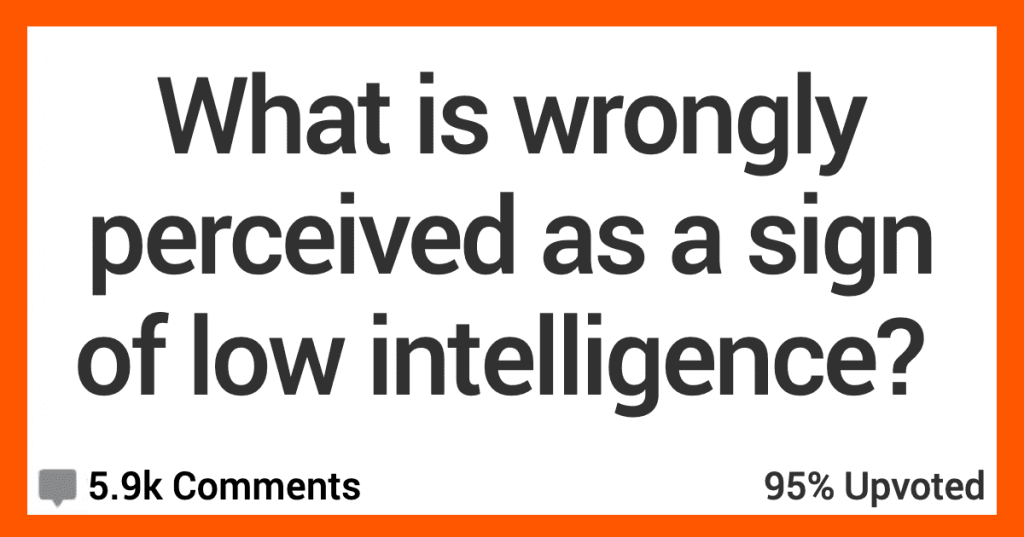 And a lot of times they’re just PLAIN WRONG.

Take a look at what folks on AskReddit had to say about this.

How are people supposed to learn if they aren’t allowed to ask and expect the correct answer?”

“Skilled jobs can be highly stressful, someone might choose a lower skilled job for the sake of their mental health, not because they’re incapable of doing something harder.”

“Changing one’s opinion or position on a topic or idea because of new information is the most intelligent and mature way to approach things.”

Being inarticulate doesn’t mean someone is stupid; unfortunately it can come across that way.”

5. Nothing wrong with that.

“Humility to openly admit you don’t know something or enough about something is seen that way for some dumb reason.”

“People acting like I’m dumb because I didn’t hear them and have to ask them to repeat themselves.

I have hearing loss. How does that make me dumb?”

Worked a retail-type job with a guy who was from Iran. The way he spoke, you could definitely tell English was not his first language.

When he quit, it was because he was going off to pursue a doctorate in computer science.”

I’ve known many super intelligent people who were assumed to be stupid and treated badly.”

It could mean that they have undeveloped talents, never grew up with encouraging people around them or been putting their skills in the wrong direction. People tend to perceive others the way they perceive themselves.”

I’m studying to be a special education teacher and I suggested that a dyslexic classmate listen to audiobooks since he struggles with reading.

He now reads one book a day and he is VERY well read and an expert in the classics.”

Some of the smartest people I know talk very very slowly.”

“Asking a lot of questions.

Also, many people love to think that they appreciate people who ask questions, but most all of them quickly turn into frustrated, impatient d**ks after about two questions and start becoming short with the questioner OR they get defensive because they realize they don’t have all the answers and feel personally attacked.”

Tell us what you think about this.