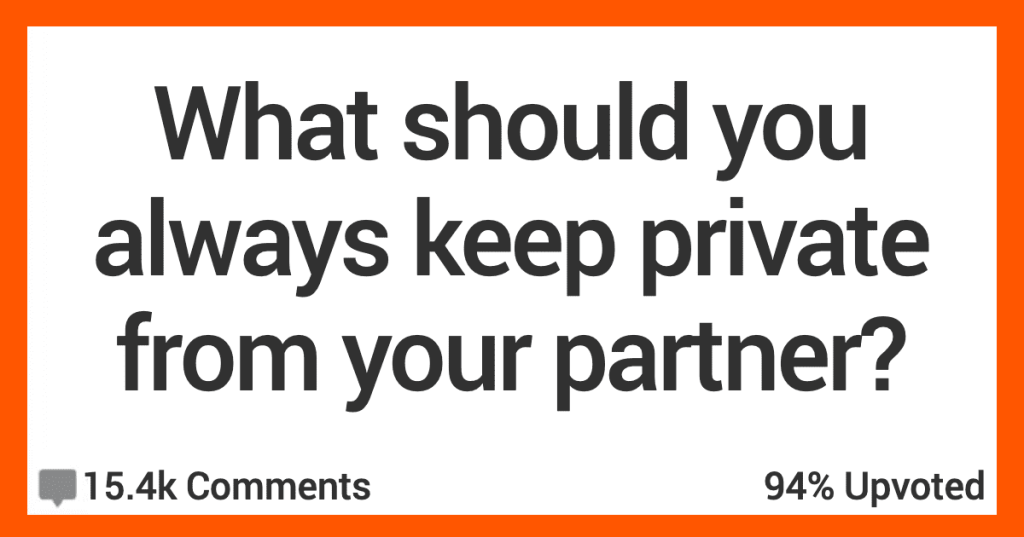 Every relationship is different and has its own problems and issues.

And if you’ve ever been serious with someone, you know that’s the truth, brothers and sisters!

And sometimes you should probably just keep some things to yourself…

What should you keep secret from your partner no matter what?

“Sometimes, no matter how attractive your partner is to you and no matter how much you love them, there is an aspect to them that is unchangeable but that you find gross or annoying or just generally less than attractive.

Clogged nose pores, a laugh that sounds like a muppet, big toe nails that just look a little bit weird, or that single long hair growing from inside their ear that just keeps coming back no matter what they do. If it’s going to make them feel insecure or unloved, this is something you should just keep to yourself.

In a relationship, you learn each other’s weak points and vulnerabilities, and using them against your partner is a boundary that, once you cross it, you can’t come back from. Once you make someone feel like they can’t trust you with their vulnerable self, your relationship is on its way out.”

I had an ex that used to demand I tell him what I talked about in my sessions and it was super uncomfortable. With my current partner we are both in therapy and if it’s a phone session the other goes in a different room. If we want to talk about something we told the psych or something we will tell our psych at the next appointment we do, but I would never ask and nor would he.

We might ask “how did it go?” To which the other may say “it was good” or “it was emotionally draining”, but that’s as far as it should go. (These are personal sessions, not couples therapy, we’re not in that).”

“The unkind s**t you think when you’re angry and tired, it will absolutely never help at all to say any of it out loud and even if you don’t have a particularly big fight or break up over it you’ll still regret it and they’ll still remember.

Possibly also what you think about how hot other people are, depending on how jealous/insecure your SO is.”

“My wife is sensitive about animals, so anytime I see/read some sort of tragedy related to an animal, I hide it from her.”

“Things that you don’t like about their body. They just don’t need to know.

If you are concerned about their health or hygiene that warrants a conversation but making comments about physical flaws — completely unnecessary.”

“The huge p**is of your ex-boyfriend and how much more satisfying it is to have someone with a “normal” one.

I know its not logical but no dude wants to hear that. Don’t question it just trust me.”

“Even though my wife and I have been happily married for 6 years, we decided we would never go for a s**t while the other is in the shower.

We’re just not going there.”

“Where your secret stash of band aids is.

I dunno about the rest of you, but my wife and kids will go through an industrial size case o band aids faster than you can say supercalifragilisticexpialidocious and the twice a year I actually need one they’re never there.”

My partner writes in one every night before bed and I have no idea what any of it says. If she wants to share with me she can.

Those are her private thoughts and feelings until she decides differently. Same goes for me.”

“Things you arent ready to talk about yet.

I have a lot of trauma and I’m not always ready to talk or explain.

However, I’m lucky my partner respects that and has let me open up at my own pace.”

“Which of your friends or family don’t like them.

It will do nothing but upset them, and worse create a bigger problem between them.

I would also like to add to that if one of your friends or family members don’t like your s/o and you aren’t at the very least making them be polite and respectful when they have to be around each other you are the main problem in that scenario.”

“No matter how healthy a relationship is, there’ll always come a time where you have resentful thoughts of your spouse.

Those should be kept to yourself, as most of them pass quickly. The only time you should share them is if they’re persisting in some behavior that is hurting you, and then it should be done calmly and not in the heat of the moment.

For instance, if you got home from work tired to find your spouse binge watching a TV show, but the sink is full of dirty dishes, the impulse may be to lace into them. Don’t. Go ahead and do the dishes, and tomorrow, when that initial flash of anger has passed, discuss the issue.

People say arguments can be healthy in a relationship, but it all comes down to how you argue. Spouses, at least if they’re good ones, know intimate details about you, your past, and how you think and feel. This gives them weapons to hurt you, and it may be tempting to use such weapons when angry.

But if you know your spouse has a sore spot about their dad, and you say in anger “this is why your dad never loved you”, you have permanently damaged your relationship. And that damage builds up over time. Successful relationships survive because people rein themselves in in that moment.

Even when they’re angry, they don’t want to inflict wounds like that. So whenever the impulse arises to use those weapons in anger, resist the temptation! You may forget what you did quickly, but they won’t.”