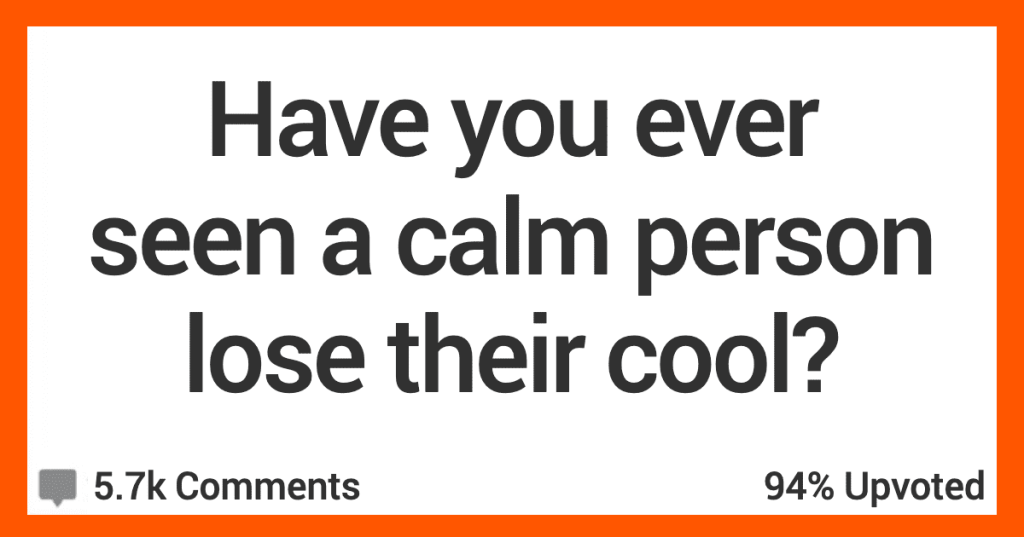 You just never know how people will react to certain things…

And sometimes it’s the folks who are as cool as cucumbers who LOSE THEIR COOL and you never saw it coming.

Life is strange, my friends…

Check out these stories from AskReddit users about when they saw calm people totally lose it.

“My fifth grade teacher was a very calm and collected individual, except one time when a kid said her mother was a w**re.

She lost it, She was screaming about disrespect and stuff and even called her mom, put her on speaker and asked if she was a w**re. In front of the whole class. I miss her.”

“My first semester in college I was in a math class with a horrible teacher, the entire class h**ed him.

The girl that sat in front of me was very sweet and soft spoken. One day, I don’t remember what set her off, but she just snapped and started screaming at him.

It caused such a commotion that someone called security to check if everything was okay. The teacher quickly dismissed security and went back to “teaching” like nothing had happened.”

“One time in high school, a couple b**lies were up in this other kids face. Dude was just sitting there like Anton Chigurh or Pvt. Pyle, no expression and staring straight ahead, clearly not hearing a thing.

One of the b**lies inched closer, and the kid decked him as hard as he could in the face. The b**ly was knocked to the floor, speechless with his nose bleeding everywhere. The kid then calmly stood up, still with no emotion, calmly packed his things, and made his own way to the principals office as if nothing at all had happened

It’s still one of the most brutal things I’ve ever seen. It was like right out of a movie.”

“Quit the job on the spot.

He went out of the office showing the finger to everyone and telling us to go f**k ourselves.

“My middle school homeroom teacher was amazing. She was a science teacher and had a chameleon in a huge wall sized cage. It was like 8′ long, 3′ deep, and 6′ tall. It had branches for climbing, water, tunnels, just a complete perfect environment.

One day before school started, she walked into her classroom while some kids were poking the chameleon with meter sticks and she went to 11. I got why the hair floating trope is a thing that day because she just physically radiated anger.

She dragged them to the office then when she came back she told us to hang out or play science hockey until first period while she went to cool down in the science office.”

“This was probably about 12 years ago or so.

My best friend broke up a fight between two of his younger brothers. I was scared s**tless.

He tried Chantix to quit s**king. We worked in a warehouse with assembly lines packaging refrigerator components under Whirlpool/Maytag contracts. It was a pretty stressful job at times. One day we were packaging an order and we ran out of a shelf due to poor communication so the assembly line had to stop. Ed absolutely snapped.

He took off on his forklift to get the shelves. When he came back with the shelves on his left he drove through the ‘spider’ area where forklifts aren’t allowed, slamming through thousands of components and running his forklift directly in to the assembly conveyor belt destroying the entire operation. Bodies went flying.

He threw it in reverse and slammed backward in to containers stacked all the way to the ceiling, causing hundreds of metal/glass fridge shelves to come raining down. It was terrifying and he nearly killed 8 of us working on the line.”

“My aunt. For years she was always super calm, always joking and in a good mood. In my 15 years I had never seen her angry at anything and I had definitely never heard her cuss. Until Christmas 1999.

Some backstory, my mom had two younger brothers. One (A**hole Uncle) was/ is a complete d**k and the younger one (Good Uncle), my aunt in the stories husband, is a pretty average guy and gets along with everyone. For years my grandma enabled my A**hole Uncle and despite my grandpa’s best efforts he just became more of a d**k.

Summer of 1999 A**hole Uncle and my now ex-aunt are separated with a divorce pending. Her still being nice to her nieces and nephews called my grandma and asked if she could drop off our Christmas gifts and my grandma said that was fine. She shows up and my uncle is p**sed. My grandma told all of us kids, including A**hole Uncle’s daughter to stay in the family room.

I’m stunned. Can’t believe it. My grandma is in a panic because again, she enabled it and him going to jail for DV would likely cost him his job (fire chief). A**hole Uncle takes off and shortly after we all leave. Christmas ended a bit early that year.

To this day I’ve yet to hear my aunt cuss again and only ever seen her get upset about something and it was again about my A**hole Uncle.”

“Worked with a guy at scout camp who was in charge of the Archery range. Super quiet and reserved guy, very nice and down to earth.

One day we had a scout draw his bow and point it at one of his friends as a joke. Ive never seen a kid get the fear of God put in him so fast after my friend ripped him apart for that.

Firearms are no joke.”

One day, we had a class right after lunch break. Everybody comes in and takes their seats, except one girl who puts her binder and textbook down at her own desk, then goes over and stands near her friends desk and begins to talk to her.

The teacher tells her to take a seat, but she just ignores him. Without one word, the teacher gets up from his desk, walks over to the girls desk, grabs her binder and textbook, then steps out of the classroom and launches her stuff down the hallway.

The girl sees this and runs out of the classroom to get her stuff. As soon as she steps out, the teacher slams the door and locks it behind her. He then looks at the class and says “even dogs can be taught to f**king sit”.”

“My dad is a really nice calm dude but the neighbor boy hit me in the face with a pan.

Next time my dad saw him outside, he walked menacingly to the fence and yelled “next time you touch my daughter I’ll rip your f**king head off and hand it to your parents”.

Even as an adult that dude is still afraid of dad 20 years later.”

“My friend in college who was also my roommate was a nice guy. But he was ashamed of himself because he gains wait but can’t loose it.

One day we were in the hallway at our college and some guy came up to him and started calling him bear,fat, and many other things I was about to do something until my friend punched him in the face the guy called the police and my friend got detained. Of course I was a witness in court.

Still to this day I am proud of him for standing up for himself.”