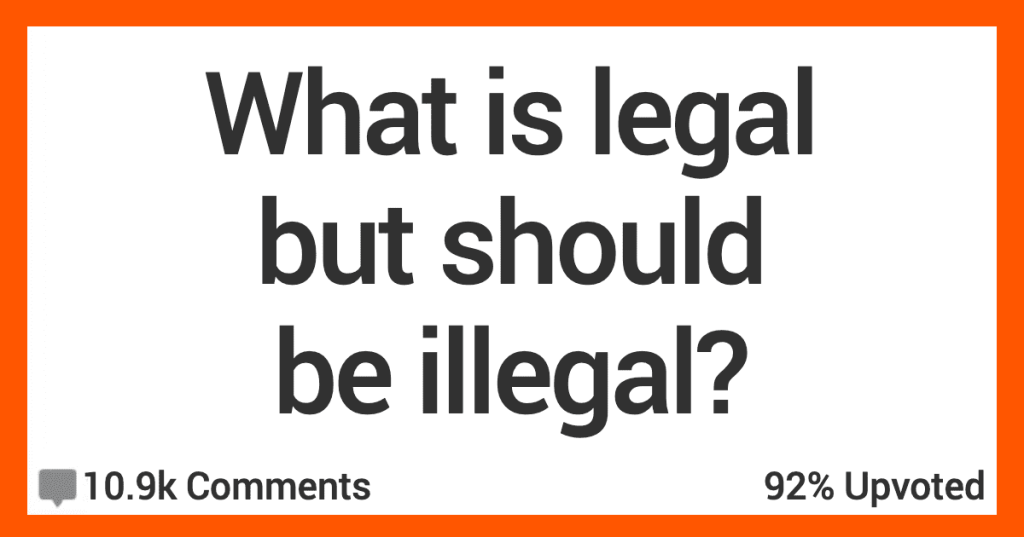 Oh, boy, this is gonna be fun!

And AskReddit users definitely had some thoughts about this.

Take a look at what they had to say about this.

“Not being able to unsubscribe to something using the same method you used to subscribe.

To unsubscribe: you’ll have to send three separate emails and make phone calls to people on two different continents, neither of which you can understand.”

At the very least, make ones that are based on percentage of the payment itself illegal.”

“Hiding ingredients in food by calling it “natural flavors”.

God forbid the public knows we use nasty beaver parts on them!”

“Overselling a plane and putting people who BOUGHT tickets on standby.

In any other industry, selling something that doesn’t exist would be considered fraud.”

“Police sirens on the radio.

You’re free to go. Your car and money are under arrest.”

“Contracts signed by parents on behalf of their child still be enforceable once the child comes of age.

Taylor Swift and Lilly Allen are the big famous examples of this, but it happens to loads more who don’t get big enough to get the media attention.

“The car industry has known they are blinding drivers and just keep making their lights brighter and more dangerous.”

“Catching wild animals and selling them as pets.

Hermit crabs, parrots, and many fish still fall in this category and are going extinct because of it.”

Absolutely blatant abuse of power and funneling of wealth.”

“It should be illegal to blatantly lie to voters while running for political office.

We call it fraud and jail people for lying in order to gain financially. Yet we call it normal and allow politicians to lie in order to gain votes for political offices, offices which not only benefit them financially but also give them enormous amounts of power to benefit and detriment others.

Then we wonder why political office seems so often to attract the most fraudulent, sociopathic, and dishonest among us. We basically have a neon sign over our political system saying, “If you enjoy committing fraud and are a pathological liar, please apply here… we will let you deceive as many of us as you possibly can for more money and power than you can dream of.””

“A friend of mine was busted selling pot years ago, they raided his mom’s house and found $35K in a safe.

It wasn’t from the pot it was money his sister had been sending back to the family from her lucrative job in another state.

They took it and while he was in jail sent him a thank you card with a picture of the new police cruiser they’d bought with her money.”

What do you think should be illegal that’s currently legal?