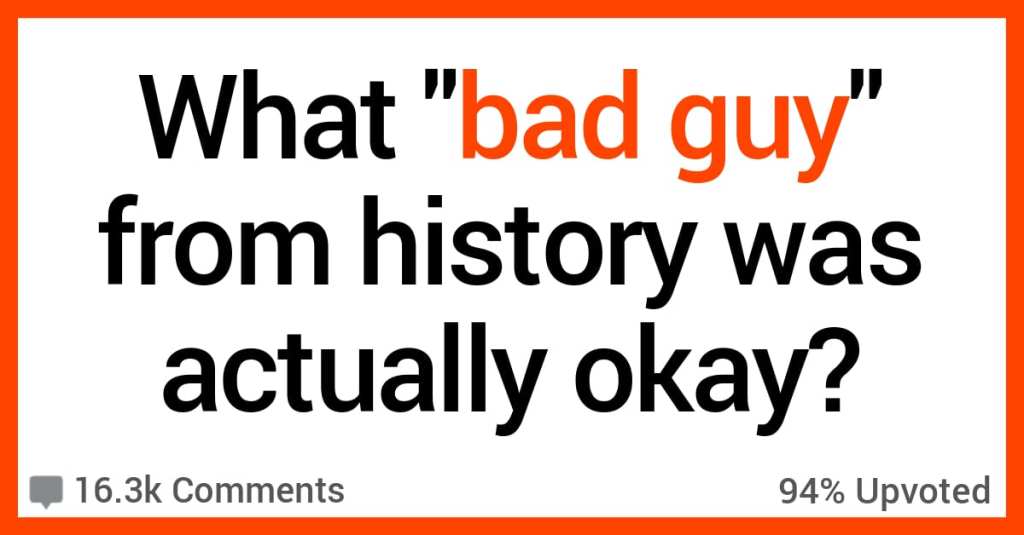 They say that history is written by the victors and boy, ain’t that the truth?

And yes, a lot of history’s “bad guys” have that reputation because they were terrible people, but there are some men and women from the past who have gotten a raw deal in the history books.

What “bad guys” from history are getting a bad rap?

“Khrushchev was actually the bigger man during the Cuban missile crisis.

He initiated the negotiations and even let Kennedy look like the hero by keeping America’s side of the bargain secret.

Not to mention all the measures he took afterwards to prevent something like it from happening again.”

“This is a complicated one, and not necessarily “okay,” but Neville Chamberlain is a fairly good example of this.

For context, Chamberlain is generally known (notoriously) as being the prime minister prior to WW2 that ‘let Germany rise to power through appeasement.’ Because of this he’s seen as weak, and virtually the poster-child tagged tethered to the quote “all it takes for evil to triumph is for good men to do nothing.”

In actuality, if you dive into history of the time, in the late thirties the UK was so wildly behind Germany’s war machine that there wasn’t anything they could do that wouldn’t be blatant suicide; their manufacturing was leagues behind, and their front was in no way organized.

He’s gone down as committing one of history’s greatest betrayals, but what he actually did was choose his Republican ideals over a man he personally loved (who had sparked a civil war with an illegal invasion of Italy, and was unquestionably acting like an autocrat).”

They have forever been painted as cowards or traitors but let’s be honest they didn’t believe in the fight/want to d**.

I am a combat vet myself and it took me a lot of years to realize this.

Hell I no longer know what the point of Vietnam, Afghanistan, or Iraq were (minus the rich getting richer).”

A lot of people think she was just a vapid s**t, when she was really a kind and powerful woman who used her talents to get to the top.

She was a bit promiscuous, but since when does being s**ual make you a bad person?

She was also against rac**m before it was popular.”

“Nero has been vilified as an evil tyrant who burned Rome down while he played the lyre, had Christians covered in pitch and set alight to act as torches for his gardens and overall has been portrayed as an insane lunatic who was deeply depraved.

He certainly wasn’t a saint, as he did have his own mother m**dered, but Nero, like Caligula, were both slandered by the Senatorial class, who despised both of them.

Nero was actually relatively well-liked by Roman commoners and while he probably wasn’t the best ruler, he is not the borderline villainous monster he is portrayed to be in the media. And his fiddling while Rome burned is most definitely made up.

It’s funny because Constantine the Great, who is venerated by Christendom, actually boiled his wife alive in a bathtub, but you never hear anything about that… hmm.”

“Not a bad person, but I feel like Ulysses S Grant is seen as one of America’s worst presidents and I dont know why.

He tried his best to oversee reconstruction and was undermined, hired a lot of black people to his staff, he appointed Sherman General-In-chief, called for better treatment of the native Americans, and signed the legislation for Yellowstone Park. I get the feeling his hatred was disseminated from the South, as was love for Robert E. Lee.

Also, his whole reputation for being an al**holic was bulls**t too. Most accounts was that he wasn’t a drunkard, its just when he would get drunk, he’d get WASTED, because he was a lightweight when it came to drinking.

He was kind of anti-semitic, but he didn’t try to k**l Jews or deny them rights- He had an admittedly ra**st notion that Jews were en masse involved in the slave trade. There were some, but actually more Jews fought for the north than the south. But thats excusable.”

“Fred Hampton and the Black Panthers.

They’ve been smeared as “extremists” by the usual suspects for fifty years, but I’ve read that the Panthers had health clinics, fed the hungry and did a lot more for their community than the f**king cops.”

Usually omitted in American textbooks and all but ignored by modern government (compared to commemorations of other notable Americans), even though he was one of the most famous Americans of his time and the raid he led (Harper’s Ferry) was one of the final straws leading up to the Civil War.

In some textbooks in southern states, he is still referred to as a treasonous lunatic (which he was, if you were a slave owner or fighting on behalf of slave owners).

In reality he was an abolitionist of the highest integrity (even if judged by modern standards), a constitutional literalist, and considered it his mission from god to dismantle the abomination of slavery.

He was the first American ever convicted of and hanged for treason, which should be yet another reminder of this country’s legacy of white supremacy and nightmarish civil rights record.

Frederick Douglass called him “a brave and glorious old man. History has no better illustration of pure, disinterested benevolence.”

In my opinion, the erasure of John Brown from American education is almost as great a crime as vilification.”

Guy was basically the king of blackface in the 1930’s. Although at the time no one saw him as a bad guy, many modern people would consider him as having made a career off of racist portrayals of black people.

While blackface was his schtick, he was actually a big fan of black music and entertainers and would regularly help out black artists in the industry when almost no other white people would do so.”

“Benedict Arnold’s name is synonymous with “traitor” but his actual story is pretty complicated.

He was born in Connecticut to a family who was basically American nobility. His great-grandfather had come from England in 1635 and went on to become the governor of the Colony of Rhode Island, and by the time Arnold was born his family was “old money” in America.

Arnold was told for much of his youth that he’d go to Yale. Unfortunately his father drank their entire fortune away, and Arnold himself had to start from scratch and support his family. He obtained apprenticeships with an apothecary and merchant and went on to become a very successful businessman. That was only the beginning.

The Sugar Act of 1764 and the Stamp Act of 1765 put his business at risk and he resorted to open smuggling to save his fortune and publicly protest the extra taxes, solidly on the American side of the debate. He also joined the Sons of Liberty.

In 1775 when the Revolutionary War was beginning he signed on to the militia and was made Captain, and immediately suggested an attempt to take Fort Ticonderoga, which he was instrumental in doing. After the capture he found out his wife had d**d earlier that same month.

He then suggested an invasion of Quebec, but was passed over to lead the expedition in favor of Philip Schuyler (father of the famous Schuyler Sisters for all you Hamilton fans out there), so he pressed to be allowed to join the invasion by moving toward Quebec City.

He was allowed that post, but it was a grueling journey that lost him some men, and their contracts being close to expiring forced him to press an unsuccessful attack that resulted in his left leg being shattered.

Then he was assigned to manage the defense of Rhode Island, and passed over for a promotion to Major General while five of his juniors were promoted above him. He discovered the British were headed to Connecticut and lead a contingent of militia to stop or slow them down, his left leg was injured again.

Due to those actions he was promoted to Major General, but not given equal or senior rank to those promoted before him. He attempted to resign but George Washington refused his resignation.

In 1777 he disobeyed orders and took to the battlefield in the Battles of Saratoga and was considered instrumental in the American’s major victory there. He sustained more major damage to his left leg. Congress gave him the seniority he felt entitled to when initially promoted, but Major Horatio Gates took most of the credit for the victory, even though he’d ordered Arnold not to attack.

Due to the extreme damage it had sustained over the years, Arnold’s leg was poorly set, which resulted in it being 2 inches shorter than his right leg. While recovering from his injuries he was sent to be military commander of Philadelphia, a city that had been strongly occupied, and recently evacuated, by the British. The city was extremely politically divided.

While there he came up with various business propositions in the hopes of encouraging the local economy and maybe building some of what he’d lost during the war. He was publicly accused of abusing his position, and was court-martialed and convicted of two minor charges, despite it being fairly common practice for officers to make business dealings in war trade.

In general all those beneath him thought he was a valiant war hero, and many equal to and above him thought he was outspoken and whiny, but still in many cases a war hero. His constant unreserved politics and self-advocation made him difficult to like, and so there were those who didn’t like him. There were even smear campaigns organized over the years. George Washington was among those who liked him a lot, but Arnold was starting to feel he’d been kicked too many times.

Bitter about his personal lot in life and disenchanted with the direction America was moving in, it was about here that he started to consider changing sides.

Of course it can be hotly debated, but he’s not as black and white as most people think.”

“William Bligh, of Mutiny on the Bounty fame.

In pretty much every movie adaption of the story, Bligh is depicted as a cruel slave-driver who has men mercilessly whipped for the slightest infraction, and the crew finally had enough of his tyranny and mutinied.

In reality, Bligh was notably easy on his men for the day, and there is no record he ever ordered a flogging. He was known to allow men on watch in bad weather to come and warm up inside his own cabin. He and Fletcher Christian had been long-time BFFs before the Bounty.

The mutiny happened because after long, hard months at sea, the Bounty had a five-month layover in the tropical paradise of Tahiti, where many men in the crew began to live ashore with native women, and military discipline started to come unglued.

Bligh had to enforce increasingly-harsh restrictions, because the natives were eager for any sort of trade, and to get a little native tail, sailors were actually pulling nails out of the ship for trade. He came down hard on Christian because it was his duty to keep the crew in line and he was failing at it.

So Christian and about half the crew mutinied, and set Bligh and 18 followers adrift in a small, dangerously-overloaded boat. In one of the most mind-boggling feats of survival seamanship in history, Bligh managed to navigate the boat some 3,500 miles to safety.”

Who do you think has gotten a raw deal in history?