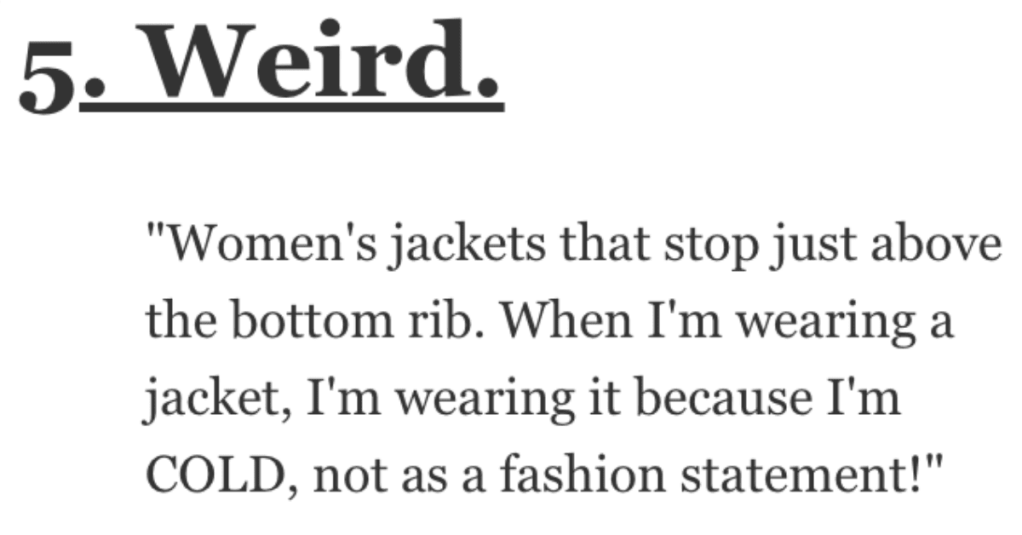 What Fashion Trend Do You Really Not Like? Here’s What People Had to Say.

I think I’m turning into a grumpy old man, because every single time I open my Instagram app, I get super annoyed at the reels that pop up on my feed.

Will there ever be an end to men and women dancing in their kitchens and acting out the lyrics of the songs they’re listening to?

I can’t take it anymore!

And I always report those videos as “uninteresting” to me, but it just seems like there’s no escape. And that’s my diatribe for the day.

I know that isn’t a fashion trend exactly, but it’s pretty close in my book because these folks are always wearing the latest, greatest workout gear…so there you have it…

People on AskReddit shared the fashion trends they really don’t like. At all.

1. Who are these people?

“Long sleeves on women’s clothing that are too short.

Most long sleeves end well before my wrist and a few inches past my elbow. I’m not exactly Queen of the Long-Armed Amazons!

I end up pushing the sleeves up on everything because I look like a kid after a growth spurt whose clothes no longer fit properly.

WHO ARE THESE PEOPLE WITH IMPOSSIBLY SHORT ARMS?”

Ralph Lauren is the worst.

I’ll see a shirt I like with an oversized polo man. It ruins the shirt.”

3. Enough with the boxy.

“SQUARE SHIRTS, THEY LOOK SO BAD ON ME!!

I just want to find a shirt that won’t make me look like I’m wearing a box!”

“Sick and tired of cropped clothing, so many shirts these days are made to pair with high waisted pants.

As someone with a large bust, I find they just ride up and expose too much even if I have high waisted jeans.

“Women’s jackets that stop just above the bottom rib.

I’m 100% behind girls feeling badass and proud of their body no matter what it looks like!

I don’t have a terrible body but have serious insecurities so I wouldn’t be caught d**d in one, and it seems like lately it’s hard to find tops not cropped.”

“That men’s underwear with “Addicted” printed on the waistband.

Addicted to what, the wearer or paying too much for skivvies?

Seriously creeps me out.”

“What’s crazy is how “Streetwear” of wearing athletic aesthetic became high fashion when in reality Adidas use to be the broke person’s Nike.

Every year it gets worse and worse.”

“As a man, I can’t imagine being a woman with no pockets on f**king jeans.

Seriously, who the hell thought that was a good idea to make FAKE POCKETS!?”

“The way that so much of women’s clothing has f**king unfathomable sheer panels or cut-outs on it.

If I’m searching for a woolly jumper in the d**d of winter, do you really think I want it to have a sodding cut-out at the neckline so that my delicate collarbones can get frostbite while the rest of me is nice and unfashionably toasty? Why the f**k would I be interested in a jumper made of the thickest wool known to mankind, with a turtleneck that could suffocate a six foot man, if it’s f**king backless?

I don’t want a bastard t-shirt that exposes just the band of my bra and a weird seven inch window between my shoulder blades. Why the p**s do you think I want to expose three inches of random skin between my bosoms, in such a way that any bra would show, and if I didn’t wear a bra then an errant nip-nop might end up playing peekaboo?

The number of times I’ve seen a nice dress which has piqued my sartorial interest and then I’ve turned it round and found that there’s a solid 2ft of fabric missing from neck to crack, holy God. And they never take the extra fabric they save from those stupid f**king cut-outs to make pockets, either. It pi**es me off immeasurably.”

What are some fashion trends that you don’t like?