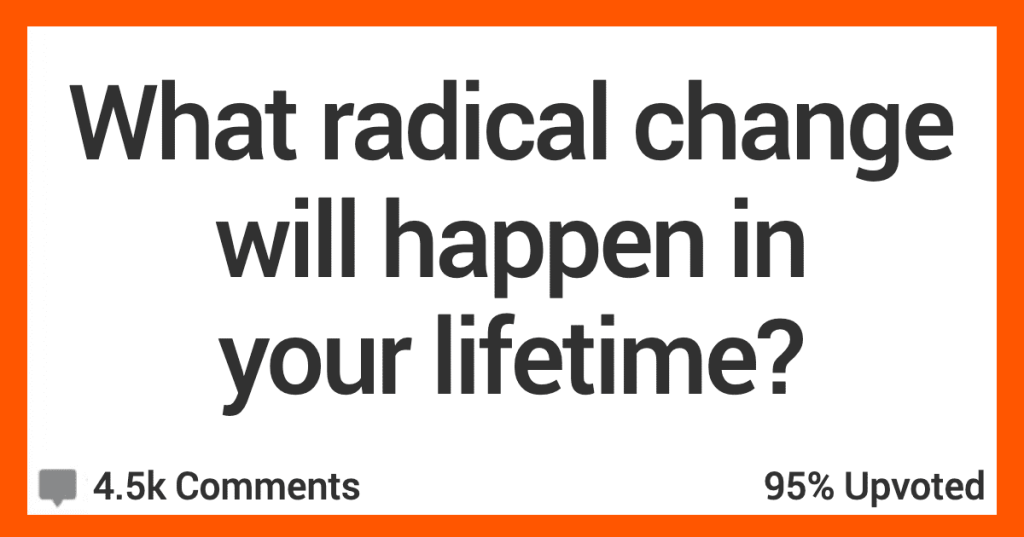 As I’ve gotten a little bit older, there’s one thing I know for certain: the world is unpredictable and you never know what might be right around the corner.

And today we’re going to hear from folks on AskReddit about what radical changes they think we’ll see in society in their lifetimes.

Read on to see what they had to say.

I’m not talking about things like cybernetic hydraulic arms I’m talking about something like a additional filtered to put less strain on our kidneys and liver.

I ain’t no doctor but that sounds like something that will save a lot of al**holics.”

Subsidence from water table depletion is a rising issue in California and a handful of other places, mostly arid areas with large tracts of farmland.

I mention subsidence and not the other drastic consequences of water table depletion because while things like desertification are scary, they’re less personally frightening than the idea of your house literally getting swallowed by the Earth.”

“Super Bugs… I’m referring to multi drug resistant bacteria, if WHO is right, by 2050, infections related to super bugs will be one of the leading causes of d**th in the world

Bacteria are becoming more resilient faster than we can develop new antibiotics.”

No more coal or nuclear power plants, renewable energy like solar panels and wind farms will be left behind as a fad that came and went, INFINITE FUCKING ENERGY! and provided it isn’t privately owned and is instead treated as a public utility (so the prices don’t get shot up through the roof) we’d start paying pennies even while keeping all our appliances and lights turned on 24/7.

Not to mention it would make converting all our technology like cars and trucks to full electric much easier and so SO MUCH MORE!”

“I can see a mass exodus out of the non coastal western United states due to extended drought and long term lack of water.

Just millions of people moving back to the Great Lakes region or to either coasts.

Mass migration and 1000s of miles of unlivable land would have pretty significant impact on the economy and society itself.”

“Water desalination, as a combination of the efficiency improving and the energy costs becoming cheaper overall.

That will be a huge game changer in a lot of parts of the world.”

“Either we deal with climate change or we don’t.

“The demise of the Baby Boomer generation, and the rise of Gen Alpha.

I’ll be 80 (hopefully) when that happens and I’m very, very curious to see what the children today will make of the world when they are 40.

Millenials are the last generation to remember a pre-digital age, and I am so curious to find out what a child who grew up with a smartphone will think of the world as an adult.”

“Population collapses in different countries. It’s possible within 100 years. Not enough young people to take care of the elderly and maintain our infrastructures. Japan and Korea has already started to my knowledge.

People are more focused on careers and independence than forging intimate relationships to build families in the last decade or so. You aren’t also going to build bigger families if both parents work 24/7.”

“Synthetic Human organ transplant. The tech already exists and is being perfected.

There is a solid chance humans will become functionally immortal in the coming decades.”

“Domino’s finally figuring out they’re not good at making salads and removes it from their menu altogether.

Sure, at first some of the more pretentious customers will argue it’s an option that “some” people would like to have when ordering the “I’m too tired, this is cheap and I got a coupon” dinner but eventually people learn to move on and everyone is for the better.”