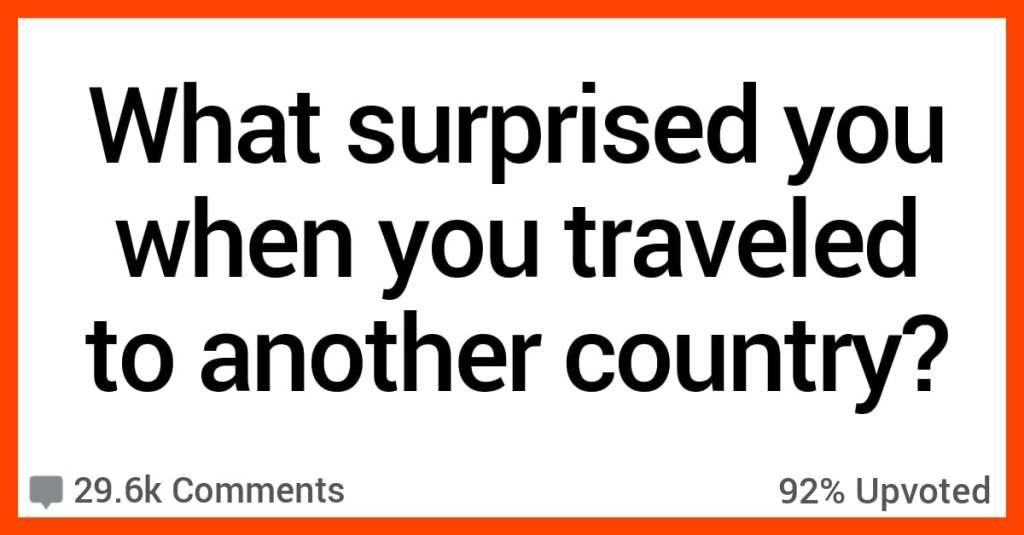 Out of the different countries I’ve visited in my life, I’d have to say that going to Russia for 10 days was the most eye-opening.

It was back in 2003 and I spent five days in Moscow and five days in Saint Petersburg. I know that I’ll most likely never get back to that country, so for me it was a once-in-a-lifetime experience filled with twists and turns…but that’s a story for another time…

What surprised you the most when you traveled to a foreign country?

Folks on AskReddit shared their stories.

“The incredible security in Seoul.

I’m from Latin America, so I’m used to be very alert at everything, everywhere. I forgot my backpack in a small cafeteria and after 25 minutes it was completely untouched in the same spot.

You could walk at 3 am with your cellphone in your hands and there’ll be no fear about anything.”

“In Egypt, Cairo, there are times when the electricity goes out every hour.

Also, there’s KFC in front of the Sphinx.”

3. A different way of life.

“The way time is experienced differently.

I’m from the USA, and when my dad and I fortunately had the money to go to Italy through a college program as a teen, the first thing that struck me was how laid back people were there. In a lot of places, it was a very stereotypically slowed down lifestyle, with people walking down the street, drinking during the afternoon, conversing and just causally dining outside.

People didn’t seem to be in a rush for anything, and while I’m sure they have their problems as well, there was much more “centeredness” across the country. People were much more focused on what was happening right now and what was in front of them.”

“How extremely nice everyone is in Ireland.

Spent the first days suspicious before I realized everyone weren’t trying to trick me into anything.

“How unsocial and lonely Sweden felt.

In Ireland, its not uncommon to make small talk with strangers. If you pass someone on the road when walking you’re usually expected to smile at them at the least. It’s the complete opposite in Sweden, I think.

People seem not to acknowledge each other, or try not to draw any attention at all to themselves if they’re in public. A local explained that if he goes to a bus stop and sees someone else already there, he would wait at least 5 m away, even if it was raining and the stop was the only shelter. It felt very odd to me.”

“That Romania is a hidden gem.

So many beautiful castles, museums, and churches.

It’s ridiculously cheap compared to the rest of Europe, and the food is amazing.”

“In Sri Lanka most people eat with their hands.

Even something like rice with sauce. They squeeze a small portion with their fingers and put that in their mouth. I tried it a few times, but couldn’t really get used to it.

In the restaurant ind the cities you often get cutlery, but in the country I often had to ask for a spoon.

Small thing too add: The people over there were extremely nice and welcoming. Most are rather poor, but they are so warmhearted.”

“How trusting people are in Turkey.

Got a taxi to the nearest major city, 45 – 50 minutes away, when we arrived I tried to pay the driver, he wouldn’t take payment and Instead asked what time we would be heading back and he would meet us where he dropped us off, then drove away

When we were ready, there he was, big grin on his face waiting. There would have been nothing to stop us jumping in another taxi and only paying one way, but this guy trusted us to not rip him off. He got a big tip.

I had to get some ear drops from a pharmacy due to ear wax becoming a very sudden problem (been looking for the same drops in England, can’t seem to find them). The guy who worked there gave me the drops, said “I go out, you pay later” and that was that, again I could have just never gone back and gained free ear drops, but I did go back later.”

“The open p**ing tubes in Amsterdam.

At first I thought it was a phone booth…then the smell hit me…they should put drains in those things!”

“How late people eat dinner in Barcelona was a surprise for me.

I’d heard it but seeing families out for a stroll and kids playing at the playground in squares at like 10pm was odd.”

“Russian people, though seemingly standoffish, are surprisingly warm, kind, and friendly once you get to know them.

While travelling through Moscow, we were lost in the Metro – got off at the wrong stop – and a nearby stranger spoke a little English, and stayed with us to help us out.

A man near Lenin’s tomb overheard our Australian accents, approached us, and asked if we had any Australian coins, as he was a coin collector. He asked if we had a 50c piece – they’re dodecagonal – but we just flat out gave him one after he offered to pay for it. Made his day.

Then there was an ice cream vendor who just kept giving us samples of surprisingly fantastic ice cream.

We also went to a bar, where a few guys talked to us about AC/DC, and showed us more effective ways of getting around with a few tricks using Apple Maps that we didn’t know about, and told us some cool places to check out.

Then there was the lovely older Uber driver who couldn’t speak a lick of English, but appreciated us trying to practice Russian with her.

Even the member of the Russian mob – we think – who said goodbye to us when we left their restaurant saw us off with a, “Please come back tomorrow! Bring your friends; I hope you enjoy your stay!” Bizarre.

“I’m from mainland Britain and spent a lot of time in Northern Ireland a while ago.

While NI is technically a part of the UK, I was still taken back by how different it felt there. Due to general ignorance, I suppose, I wasn’t really aware of how ingrained the ‘troubles’ are into the psyche of the people there. It seemed to me that there was constant reminders of those days everywhere.

The first time I went there and drove through a Loyalist town, seeing all the streets painted red white and blue (Union Flag), I remember thinking: “People aren’t even this proud to be British in England.”

The only thing that felt remotely British to me about NI, was the supermarkets. They had Tesco’s and Home Bargains.

The “English” breakfast I tried to pay for in a cafe was indeed an Irish breakfast, and the lady behind the till reminded me of that. To the untrained eye, both the breakfasts were exactly the same, but the Irish breakfast has potato bread and soda bread.

It takes 40 minutes to get to Belfast International from Manchester Airport, but it felt like a world apart.”

What kind of interesting travel stories do you have?