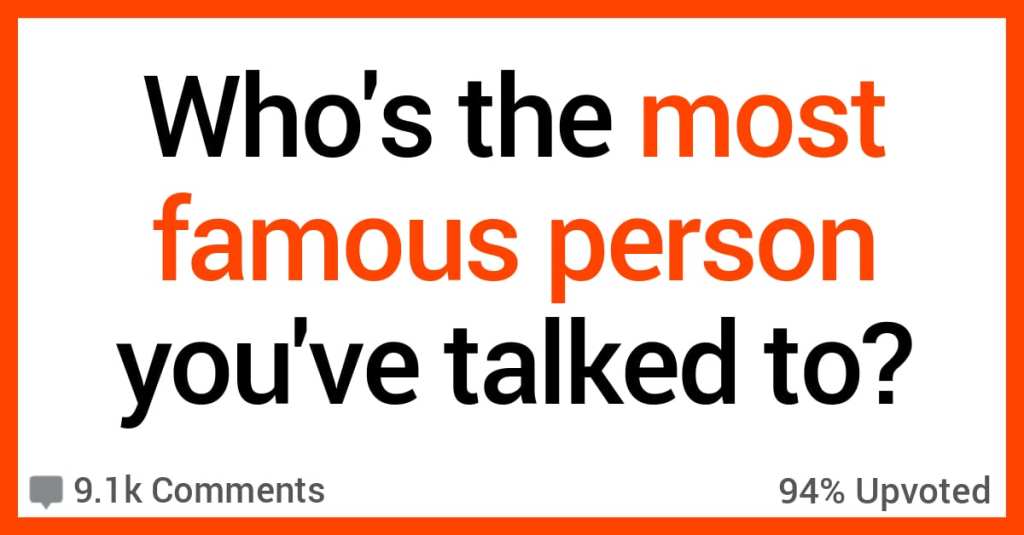 I used to work on movies and TV shows when I was younger, so I’ve had a couple of brief conversations with some famous folks.

Nothing of any great consequence, mind you, just small talk to waste of little bit of downtime.

I think I’d say the most famous one was comedian and actor David Cross. He was really cool!

Who’s the most famous person you’ve ever talked to?

Both at Universal Studios, once when I was on vacation there when I was 14 and then again when I lived in Orlando and I was 28. Very nice dude both times.

He must love Universal Studios as much as me.”

“I worked a small dinner party (12 people) where I served dinner to Jimmy Carter.

He and his wife were on their way home from a trip to China and he stopped in Washington state for a fundraising dinner but she continued on to Georgia. He took a break between dinner and dessert to call Rosalynn to make sure she made it home safely and say good night.

After dessert he came back to the kitchen to thank the chef and myself. He was just the nicest guy.”

“Tom Hanks came into my parents’ restaurant twice while visiting his mom and I served him both times.

He took pictures with my husband and my oldest.

He’s very cool, very down to earth and normal.”

“I was on my way to a Slipknot concert and stopped at a gas station for a beverage.

I apologized and went back to being silent. As he is leaving the counter, he turns and looks at me and goes, “hey man I was just **cking with you, nice to meet you.”

Turns out he paid for my Gatorade and we chatted as I walked back to my car. Super cool dude.”

He is a deeply unpleasant human being. He’s a better actor than he seems because he’s good at playing the jovial old man routine but he’s extremely rude and demanding to anyone who he sees as beneath him.

I met him twice at two different horse shows, years apart. He was nasty to me the first time, demanded I do something for him even though I was in no way part of his team or even speaking to him. I told him as much and went about my business.

The second time, I overheard him rudely say no to and then (to an associate) make fun of a kid who had asked him for an autograph. Saying no is fine, I’m not a person who believes celebrities are public property or that they shouldn’t have boundaries while going about their private lives.

But something about mocking a child who couldn’t have been more than 12 for politely saying hello, that he loved Star Trek, and asking, seems really awful and petty.”

“I was a bus boy at a high end restaurant in a hotel in 2007. It was near closing time on a slow night and I was chatting with the hostess at the entrance when Dr. Dre and his wife walked in.

I immediately grabbed menus and volunteered to seat them. I offered them any table they wanted and made small talk on the way. They seemed to be having a light-hearted disagreement about something and were smiling and holding hands.

As they took their seats and I handed them their menus, The good Doctor asked me if I was married. I replied “no sir, should I be?” He paused and looked at his wife, smiling, and replies, “most definitely” and we all started laughing. I saw a ton of famous people at that job but that was the best interaction, he was a cool dude.”

Worked at Tulip computers back in the day and he was our biggest business partner. You know, computers coming up and Windows as an operating system. Genuinely nice guy and always greeted everyone.

Was on a first name basis with him, he didn’t want me to call him “Mr Gates” because it was too formal. Good memories of that place.”

I live in the Burlington VT area and work at a grocery store that he goes to frequently.

“I shared this before – Hilary Clinton.

I’m personally not a huge fan and so I didn’t think I’d be nervous to meet her, but once I got to introduce myself and shake her hand I immediately became super nervous. In my nervous stupor I didn’t know what to say after telling her my name and so I decided to comment on how soft her hands were.

When she looked at me, a bit surprised by my odd comment, I clarified that my hands were super chapped and rough because of the harsh winter and so I was jealous of her soft hands. As she tried to find words to comment back on my comment, I showed her my hands and said “look, rough….” and it was then that I was guided gently away by some people around her.

Needless to say, it was a very pleasant exchange between myself and one of the most well known woman on the planet.”

“I used to work the door at a fairly large bar in Manhattan, so I have had a few run in’s with “celebrities”, but usually pretty brief.

The one that stood out was Matthew Broderick. The bar had just gotten a ticket for selling to a minor (unfortunately that happens when the bar is also a restaurant. Families and kids are still welcomed to eat).

Anyways, the owner told me and other security to ID everyone after that. Me, still being fairly new at time, took that literally. Anyone coming in that wasn’t a family for the restaurant was ID’d. Lo and behold on a late Saturday night, Matthew Broderick comes to the door with a group of friends.

Deciding it was better to follow instructions than use my own judgement for someone I very clearly recognized, asked for ID. His response?

“What is this, South Africa?”

To this day, that s**t bothers me. Was it because I was black? What the hell did he mean? His party was fairly diverse so I’m reluctant to claim there was any racial meaning behind it, but it was so odd and I can’t for the life of me figure out what exactly he meant by it. I do know the way he said it was….insulting I guess?

Anyways, him and his friends showed ID and went in, and that was that. This is around 10 years or so ago, but I still think about that comment. What I wanted to say long after I had the opportunity was “Yea, well I loved you in Back to the Future”.

Alas, I kept my mouth shut, smiled, told them it was silly but it was my job, and that was that. Weird though…”

Chris Cornell and this then wife Susan Silver. He lived in my neighborhood and we would run into him all the time. Would have coffee at the local coffee shop and sat down and chatted once at their invitation. Chris was a seriously sweet human being.

Met David Hasselhoff twice. He remembered me and my husband from the year before when we met again. That was pretty cool.

I met Billy Corgan once. He was a d**khead.

Verne Troyer….he was dr**k and we held hands and walked around a party together. He was just a nice guy.”

“Robin Williams. He was filming a guest role in the TV show Homicide in the same building where I worked. We made a sign telling him to come to our office and when he was finished filming, he walked through and I took a photo of him standing next to the sign.

I took the picture and he joked that I should take a second one because my finger was over the lens (it wasn’t!) and when we were done I told him thank you and he touched my arm and said, “No, thank you.””

Traveled from Texas to Maine when I was 14 to see him at a book signing in the early aughts. I was so starstruck, I could barely speak.

He told me, “You must not be from around here, because you act like I’m really important.” Great day.”

“Worked at a high end hotel:

-Anthony Anderson who was an absolute delight

-Danny Trejo who is an absolute gem of a man

-Craig Robson, nice guy but I am pretty sure he thinks I was like light staking him as there was a leak in the hallway where his room was and I was hanging out in the hall waiting for engineering to tell me if I was going to have to wake up and move a couple at 1 am on their wedding night (I didn’t have to!)

-the royal family of Lichtenstein. They came a few times a year and very chill. Carried their own luggage.

-oh and Chris brown who was as big of an a**hole as you would imagine.”

Have you ever talked to any famous people?