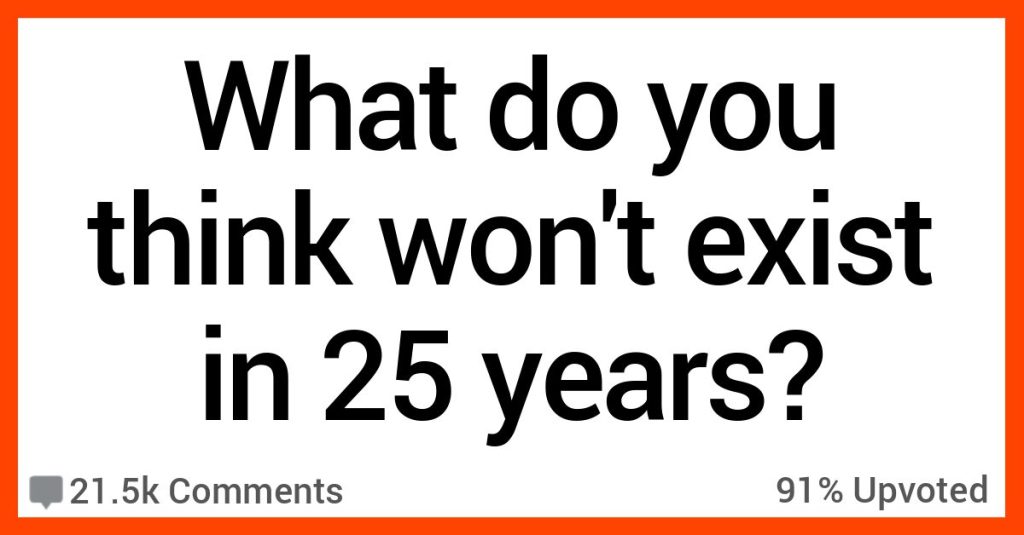 I have a friend who works in the grocery store business and he’s convinced that there will be no actual human beings checking us out in 10 years.

It’s all going to be automated, he contends…

Will he be right? We’ll see…

Between government takeover of transmission lines and the continued restriction of international access, not to mention increasing hacking directed at individuals, the internet will be a series of regulated, restricted connections to particular addresses and no others.

You’ll hardly notice the difference. After all, your search engine brings you the same crud no matter what you ask it to show now. Oh, did I mention the licensing fees for access?”

Riots in the streets. F**k it, take your pick, this nation has existed far too long in the form it’s in.

Something has to give.”

Most countries have now banned ICE cars after 2025 to 2035, which is accelerating the trend that was already there. While electric vehicles are only a few percentage of the market right now, they will be at cost parity within a few years, and after that will rapidly overtake the market.

In 2008 nobody had a smart phone, and ten years later virtually everyone did. The switch over will happen much faster then people realize.”

Like we chop up billions of trees and pulp and refine it to make paper and then some a**hole prints something as shitty as “The Sun” or “The Mirror” on it, would have been better off as toilet paper.”

It’s a stupid gadget that will soon be out of fashion.

At least classic watches are classic, and they will prevail.”

They’re already on the way out, in my opinion.”

They’ll exist in the way that IP addresses exist, in the background.

But it won’t be your primary identifier for voice or text communications.”

We’d sooner bomb each other, mutually assured destruction or not, cause people downright despise one another by nature.”

Most things will be rented/subscription based for the majority of people and you will have zero self-sufficiency or autonomy as a result.

People will likely end up buying groceries and weekly necessities on credit via after pay etc (as I type this I realise there are already lots of people who have to buy groceries on credit.)”

Hell, we may be past streaming at that point as well. With the news this week that the NFL is looking to move Sunday Ticket off of DirectTV and onto Apple TV+ it’s just the continuation of the d**th rattle for traditional content distribution.

The biggest draw for people maintaining their subscriptions at this point has been live sports, but we’re almost to the point where we can 100% pivot to streaming and not miss a thing.”

12. That would really suck.