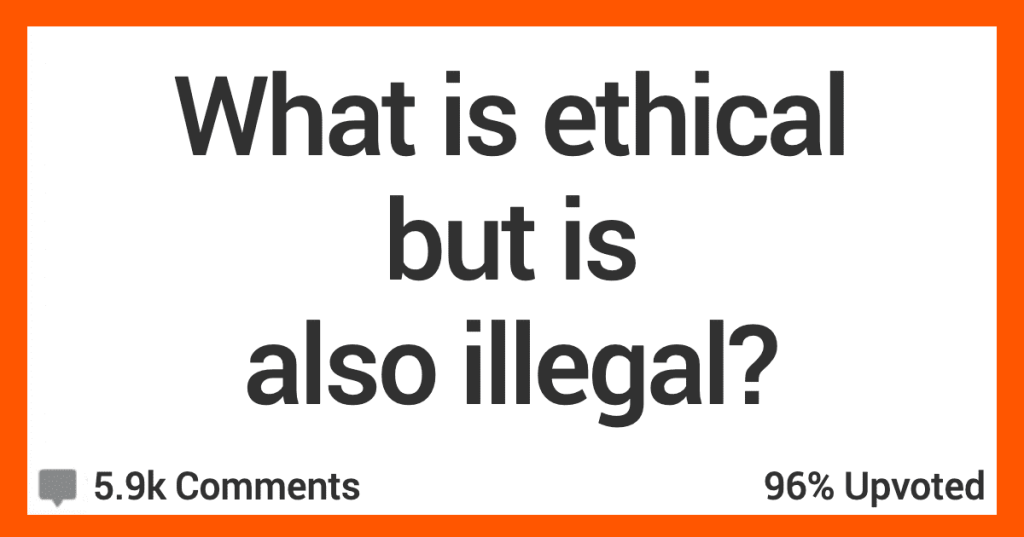 12 People Share What They Think Is Ethical but Illegal

You know what I think is ethical but illegal?

Pumping coins into parking meters for other people.

I know, I know, it’s stupid, but it’s true. You’re actually NOT allowed to do that!

You’d think cities and towns would take that meter money any way they could get it, but I guess not…

Let’s hear from people on AskReddit about what they think is ethical but illegal.

“Pirating any piece of media that has been abandoned or otherwise no longer obtainable through legal means.

A lot of software is probably going to be lost forever because the companies behind them simply don’t care enough after a certain point.”

“Housing a child that ran away from their a**sive/stressful situation at home.

I still don’t understand this.”

“Feeding the homeless – depending on your location.

Technically illegal where I am, but I won’t stop doing it.

It’s very hot here. I will at the very least, pass out water.”

Completely immoral laws. What I do with my exploring my consciousness is my business if it does not hurt others…”

“In Spain, it is illegal to hurt in any way a home trespasser.

If you find someone at your house in the middle of the night and you hurt him, he is able to sue you and, depending on the case, you might end having to pay a fee or even get to prison.”

“At least in my state (Massachusetts) there are miles and miles of coastline that are just off limits.

Oh they might be public beaches, but the parking lot has 10 spaces and 8 of those are reserved for local residents with parking passes. Looking at you Drakes Island!

In many other places beaches are just private.. mind you these are beaches that in many cases the ACOE have spent tax payer money fixing and they’re just private. Whole communities have just walled off big sections of beaches blocks long and the only access is off their back steps.

I personally feel that all beaches should be put into the public domain, period. Fine, own your back yard, but at the end of the steps where the sand starts, it’s public property.”

It’s been proven that microsdosing on mushrooms, and seeing a TRAINED AND PROFESSIONAL therapist who specializes in that field, can almost completely cure depression and other severe mental problems.

Obviously it may not work for every single human out there but it could genuinely help so many.”

It can be legal but you have to tiptoe through so much red tape and bulls**t, not to mention it isn’t legal everywhere.

But I mean, I don’t want to d** a slow painful d**th of my body wasting away. Once I reach the age where my body is failing, I want to go off into a peaceful morphine induced permanent sleep.

Why would I want to fight a inevitable slow d**th in the hospital as my organs fail, taking up resources, ya know?”

“Giving water and food to people waiting in line to vote.

And helping an underage r**e victim to obtain an a**rtion (in some states).”

“Breaking open a car window on a hot day with a pet inside.

This is considered property damage.

Many jurisdictions consider animals to be property without any rights.”

“Buffet restaurants dump the leftover food at the end of the day instead of giving it away to their workers/hungry people.

Apparently they have to follow some sort of health protocol.”

“Destroying/concreting over “homeless spikes” and other forms of hostile architecture.

F**k any company that uses them.”