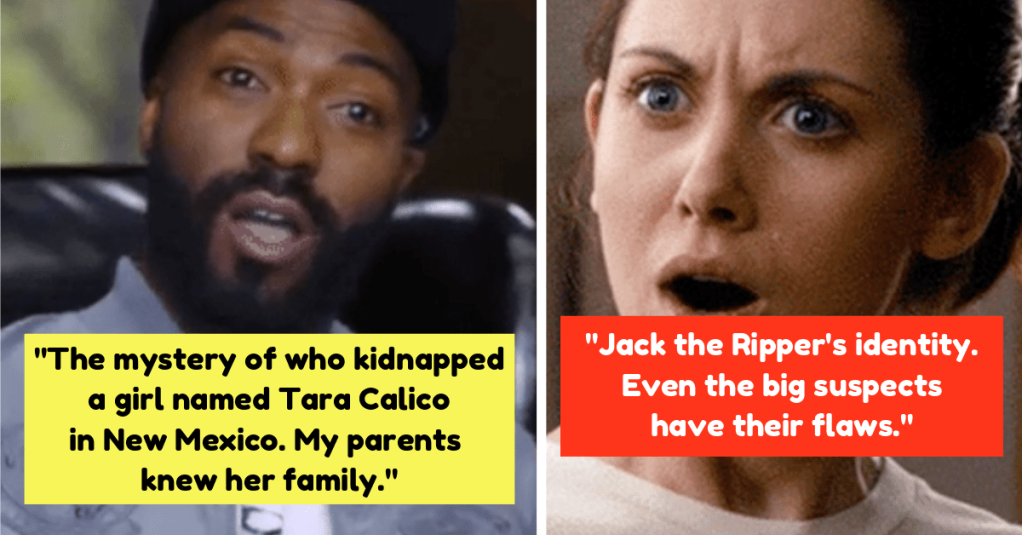 Do you know much about the Zodiac K**ler?

If not, you should do a little research, because I think it’s one of the most interesting unsolved cases I’ve ever studied.

And we all know there are still a lot of unsolved mysteries out there.

Let’s see which ones folks on AskReddit think should have been solved by now.

“Who is pumping so much drugs into the streets currently that society is becoming detrimental with this k2 and opioid epidemic.”

“The two girls that went missing in Panama.

There are only a few photos from the girls phones, attempts to call for help, and then apparently one of the phones were turned on later and the wrong PIN was entered a few times (this is not confirmed if it was just random). Some clothes were found later during a search, mainly scattered bones with some skin on them and one of the girls bones were bleached.

The photos and the bones suggest someone k**led them. For some reason there was 90 photos taken, but none of them except for 3 are even remotely clear to see anything, it’s chilling as hell…

I hope it gets solved one day, those families deserve more closure other than what they have now.”

“Exactly what happened in Tunguska in 1908.

The generally accepted theory is that it was a meteor that exploded before it hit the ground, but from what I’ve heard and read they haven’t found any material evidence of that.”

“The location of Malaysia Flight 370.

We can send spacecraft millions of miles into space, yet we can’t find aircraft on our own planet?”

I believe the theory where she crashed on the sandbar of that one island and d**d on it. A old photo showing the wheel well of a plane just like hers in the water, the set of bones that based on measurements match Amelia and the items found seem to point to that.

I wish someone would go back and try to find that plane to confirm if it’s true.”

“The mystery of who kidnapped a girl named Tara Calico in New Mexico.

My parents knew her family.”

“The disappearance of Michael Dunahee, a 5 yr old boy abducted from an elementary school playground in the middle of the day in 1991 in Victoria, BC.”

During his stay in Germany, he was very jittery and got into a fight with strangers. He also had this bad injury from it. the next day when going to the airport, he had to go to the medical station to get the all clear to fly.

While being examined. he saw something and ran out of the room. He’s last seen on camera exiting the airport and climbing over the fence into the woods.”

That poor young woman had her whole life ahead of her, and she deserves justice.”

There are some obvious wrong answers (the Royal conspiracy), but even the more likely suspects have their flaws.”

“What happened to Tionda and Diamond Bradley. These girls have been missing for over 20 years. I remember hearing about it when it happened.

I heard a couple different theories, but two decades and still nothing?”

“Why are there so many Native American women going missing and why did the US government only start keeping track of this in the last month?

The Keshena reservation is very isolated. What I mean by this is you could very easily k**l someone and dump a body in the woods out there and no one would find it, no I do not know this by experience but what I do know is a young lady by the name of Katelyn Kelley went missing on June 18th 2020, her remains weren’t found until March 25th 2021 in you guessed it, the Menominee reservation forest.

The other discerning part about this whole story is the fact that she was loved by so many people yet none of the people with her that night would open their mouths about who she was with. Next, the Menominee board offered a 5,000 dollar reward for any information leading to the remains of Katelyn Kelley and still no one talked.

This is weird because the Menominee reservation in Keshena is easily one of the poorest reservations in the US. I believe the m**der was committed by someone outside the community. S** traffickers. Many of her friends said that she was a fighter, she wouldn’t go down without putting up a fight, secondly, she had a son who was an infant, giving her even more reason to fight.

Personally I believe that she was abducted and proved to be more of an issue then what it was worth so they just killed her and dumped her body in the woods on the reservation. To this day no arrests have been made and no new information has been presented. The other f**ked up part about this, the godd**n United States government is literally present on the reservation.

There are FED chargers and SUVs everywhere on the reservation and in Shawano. So either the FEDs suck at their jobs on accident, or the US government is proving what we’ve known all along and it’s that the US government doesn’t give two s**ts about the indigenous population in the US and that needs to change.”

Are there any unsolved mysteries you think should have been solved by now?