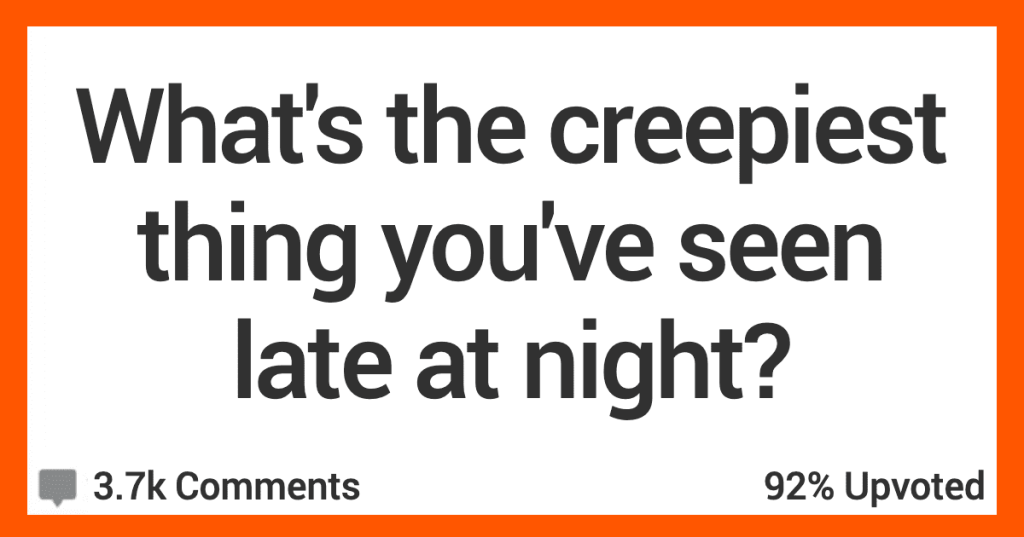 My dad used to tell me that nothing good happens after midnight…and I’m beginning to think he might be right.

That took a while! Sorry, Dad!

And these creepy stories from people who talked about what they saw in the middle of the night is even more proof that the old man was right all along.

Check out these stories from AskReddit users!

“When my husband was out of town a few years ago, I think our home was being cased because people kept showing up in the middle of the night ringing our door bell.

One was this really cracked out lady who wouldn’t leave and kept saying she just moved there and wanted to make friends for emergency contacts or something.

The other one that was really weird was a guy claiming he was a cop but was dressed as a normal guy and kept pressing me to know if a specific lady who I’d never heard of lived with us. After my husband came back, we installed cameras and the night visits stopped. All happened after 10 pm.”

“When I was 11, I couldnt sleep one night because I was sick. I heard something at my bedroom window. I ran out of the room to wake up my mom. She told me to stop being paranoid and go back to bed.

Instead, I went to the backdoor and turned on the porch light that was on the same wall as my bedroom window. Next day, I went outside to check my window and there were two boot tracks just below my window.”

“I (F) used to clean movie theaters. Our shifts would start at 2am.

On a slow weekday night I decided to go out and pick up the trash in the parking lot, around 4/5am. The theater was also next to a super busy road, so people passing by could see into the parking lot clear as day.

I had headphones in and a grabby thing in my hand to pick up gross stuff, when I suddenly get a call from my boss who is inside the building. She tells me she just saw a truck pull into the parking lot (on the opposite side where I was) and we weren’t expecting any vendors today. As she says this, the truck pulls up next to me and stops as a man starts to open his door.

There was a clear moment when he started to lean out and then saw that I was on a phone call (I had my screen facing him because I was talking to my boss through the headphones), and the grabby thing over my shoulder like a baseball bat. He sees my hands, then looks up at me and says “looks like it might snow today”. Then closes his door and drives off.

I’m 100% sure if my boss didnt called me that man would have tried to grab me into his truck. I then warned everyone that no one should do the parking lot garbage until it’s light out and to always be on alert.”

“One night I was in the parking lot alone and I heard someone say hey girl, and i turned and some old man was sitting in his truck.

He proceeded to tell me about his 8 gfs and how I could become one and that he should take me to get ice cream. I was probably nineteen at the time but I looked like I was definitely 16/17.

“I was walking my dog and a man emerged from the woods between two houses and started following me back to my house.

Once inside, I looked through the peephole and saw him standing at the end of the walk. I called the police and they picked him up a little while later.”

“I was camping with a couple friends during a cross country road trip to save money on hotels. We didn’t bring a tent, we just threw a tarp over the bed of the pickup truck and slept back there.

I have a very hard time falling asleep, especially when I’m not in my own bed, so I was up long after my buddies had passed out. While I was laying there, the only one awake amidst a calm and quiet night aside from my friend’s abnoxious snoring, I started getting this… feeling. Like a sinking feeling in my gut.

Thought maybe I was hungry; went into the truck and grabbed some snacks, then tried again to fall asleep. I drifted off for a bit, but when I woke up suddenly, that feeling was still there, but worse. It wasn’t hunger, it was that deep in your gut “something is very wrong here” feeling.

But nothing was wrong. I tried again to ignore the feeling and go to sleep. I probably got an hour or so of sleep and then yet again woke up suddenly. All kinds of alarm bells were ringing now. I remember feeling shaky and nauseous at this point. I had no idea why, but my body was in full flight or fight mode.

I didn’t care if they thought I was crazy at this point. I woke up my friends and told them we needed to leave, now. I was able to convince them and we left in a hurry. Told them I’d explain in the morning. We found another campground down the road to crash for the night.

The weirdest part happened after we all fell asleep at the new campground. I was sleeping peacefully, only to be woken up by my friends shaking me and telling me that we need to leave again. The second I open my eyes I’m completely overwhelmed by the worst feeling of dread imaginable.

My buddies both looked totally freaked as well and were practically trying to pick me up and throw me in the truck cabin. There’s literally nothing around us that should be making us feel that way, as far as we could tell anyway, but my God it felt like d**th itself was staring us down.

We got out of there as fast as we could and drove several hours until we reached a large town and got a hotel. That was the end of it. We never figured out what the hell was going on. My friend thought we were being followed at one point during the drive, I don’t really know honestly, probably never will. By far the weirdest night I’ve had.”

“I was in the Navy and became really good friends with this other guy. We went to West Virginia to visit his family at his childhood home.

A few of his other friends came over and were staying the night as well. Me and him shared his queen bed in his basement bedroom where it was very dark. I woke up in the middle of the night and clearly saw a dark figure pacing back and forth at the foot of the bed. It scared the living hell out of me and I thought it was one of his friends being creepy so i pretended to be asleep.

Eventually I sat up to confront what i thought was his friend and nobody was there. In the morning I told my friend about it and he looked terrified. He made me go tell his mom because apparently, he had seen the same thing repeatedly when he was a kid and his mom wouldnt believe him. Still creeps me out years later thinking about it.”

“I heard a child’s laugh outside at around 5 am or so while I was on the computer a few years ago. Two giggles, a few seconds apart.

There weren’t any other voices or sounds like footsteps. Haven’t heard anything like it since. I’ve heard raccoons before and it didn’t sound anything like that.”

“A deer busted into my house from the back door then jumped through the front window after messing up things in my house.”

“I was sitting on the couch in my living room, at some ungodly hour of the morning. Now my living room has a sliding glass door and a window that leads to my backyard, directly across from the couch.

Anyway I was on my phone in the dark living room when the motion activated security light turned on. I looked up in a panic and saw a guy walk up to the door, obviously unaware of me sitting there.

I obviously panicked and watched the guy try to pull the door open and check to see if the window was unlocked, which luckily it was not. He kept putting his face up to the glass to look in and somehow did not see me sitting right there in a state of utter panic.

He walked away after a couple minutes but this has terrified me since and I refuse to sit down there at night.”

“Driving across the country by myself, F in early 20’s at the time, pulled in to a remote rest stop area to sleep.

Was walking around after sunset enjoying the night air, when this inner voice said, Get in your car NOW. I ran to the car and was filled with intense dread and anxiety. Again, a voice in my head said, Close all the windows and lie on the floor. I did so, stifling in the heat.

A car pulled into the rest stop, drove around slowly, and then left. I stayed down for about 45 min, when suddenly everything felt okay. Thank God for my inner voice. Looking back at it, I was naively being really foolish. But this was back when we thought the world was safe.”

“I had the worst insomnia during covid lockdown.

Every night around 2-3 a red truck would park in my driveway and just sit there. The guy would chat on the phone and leave. My house’s driveway was not easy to access making it unusual for someone to just park there.

Between the insomnia paranoia and the sheer weirdness of this I caved and bought a Ring camera and downloaded the Next Door App. Found out he was a newspaper deliverer but we never got paper deliveries and I never saw him leave the car.