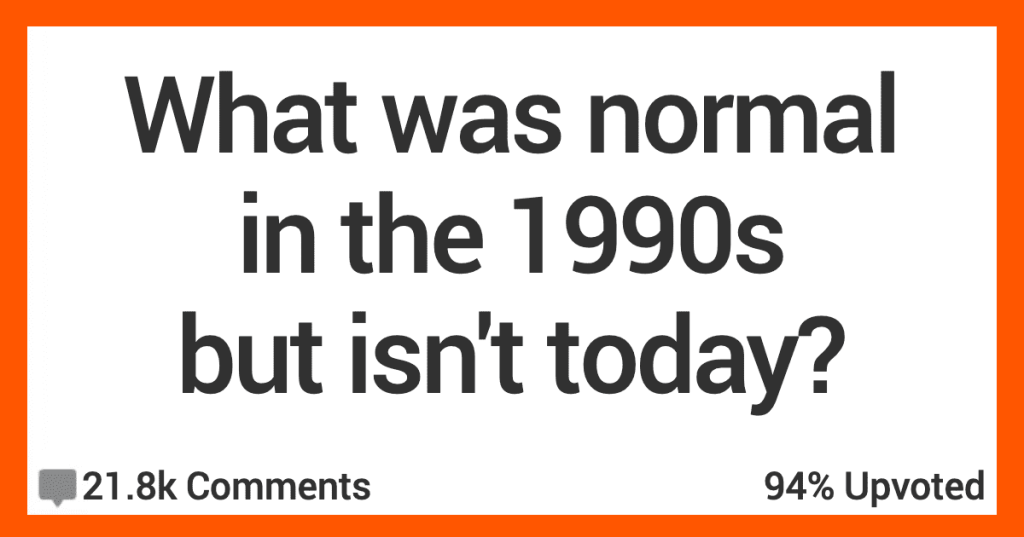 So the famous rappers wore huge pants that made it look like they had parachutes on their bottom halves?

That’s just the way we rolled back then!

And in case you don’t know who I’m referring to, it’s M.C. Hammer and Vanilla Ice…

But those days are long gone, my friends.

And that’s why the 1990s must be celebrated and glorified all the time…because it was an awesome decade!

When the other kids in elementary school said Mt. Dew contained an artifical dye that shrank your p**is, I didn’t believe them.

If they had said Surge did, I would have believed them.”

2. They’ll be here any minute now…

And having to talk to your friends parents for a couple minutes while you waited for your friend to come to the phone.”

“Eavesdropping in on a telephone call, you had to cover the mouth piece to make sure they wouldn’t hear you breathing and laughing.”

“Being completely unreachable by anyone for an entire day or more with no one thinking that it was unusual or rude.”

“Showing up at someone’s house unannounced because you were in the neighborhood and wanted to say hi.”

“Playing multiplayer video games with all of the players IN the room together.

We had some pretty heated N64 parties.”

It’s where you got your music trivia before the internet.”

“Back then I had a landline phone, camcorder, film camera, tube TV, VCR, dial up internet, pager, and a newspaper subscription.

“Going to the mall to just hang out.

I have an old home movie of my friends and I just hanging at a mall.

Sharing food. It was so much fun, now the mall is a slog.”

“The ability to simply exist without much effort.

I tell my students this story all the time: I got into the top university in my state as a classics major just because I was in the top quarter of my class. I paid cash for my education with a job I had at the campus bookstore.

During my interview for my first internship, I was never asked any technical questions but rather a few questions about my availability and work hours. My first job out of college was as a software engineer, even though my degree was in classics, because my employer trained me on the job.

Was I the smartest student in my class? Not really. I did my best, and that was enough to get by. I was an average person and was able to provide for myself without much effort.

Try doing all that today.”

“Roller rinks are now very rare to come by.

Pre covid you would go to one around once a year, but now post covid they’re almost all gone.

Also in the 90s everyone actually went to them pretty often, especially for birthdays.”

What do you think was normal in the 1990s but isn’t anymore?