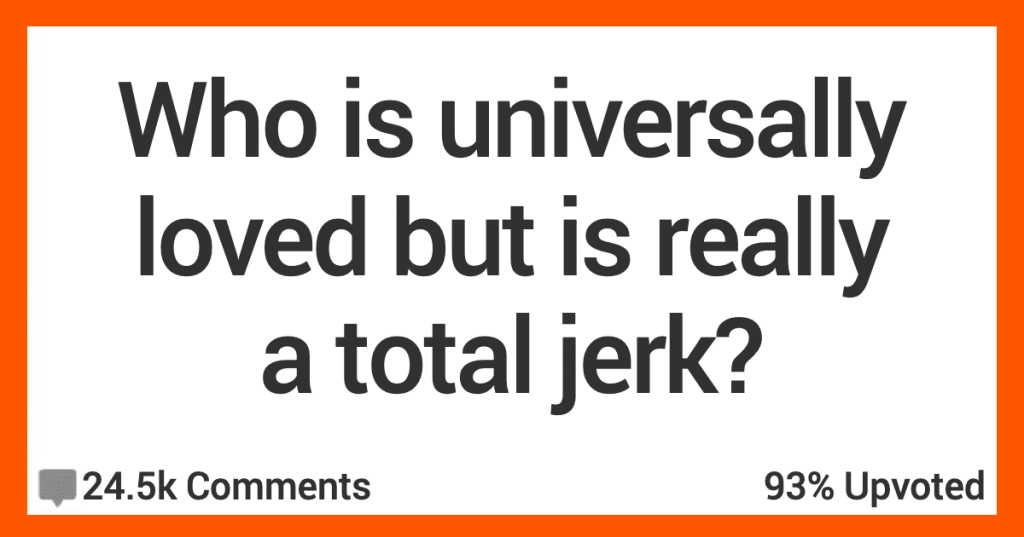 Remember when everyone thought Ellen DeGeneres was so delightful, funny, and loveable…?

Who do you think is universally loved but is actually a jerk?

Loved her show… until I went to see her live.

In between takes she was a very not nice person.”

A friend of mine worked with him as a PA and was put into an extremely dangerous situation where he was injured on the job.

Stamos basically threatened him and his friends if they came forward with what happened.”

“Worked on the behind the scenes of a Barbra Streisand album for a month and I’ve never seen a person treat regular folk so terribly.”

“Mitch Albom, aka the author of Tuesdays With Morrie.

Was just generally furious. Instead of talking about his book during the lecture, he spent 20 minutes taking a steaming dump over the staff, venue, and audience.

Ironic given the subject of his books.”

“I used to work in restaurants for the House of Mouse, and both Howie Mandel and Bobby McFerrin were total jerks.

Acted like they were completely above everyone else and both of them let their bratty kids run screaming around the restaurant, always smart when people carrying hot trays of food are everywhere.

I had a lot of positive celebrity interactions, but those two were awful. Can’t stand to listen to “Don’t Worry, Be Happy” since.”

“From personal experience Bill Nye was an absolute a**hole from my interaction with him.

It was perhaps the saddest moment of don’t meet your heroes in my life.”

I witnessed her call her assistant a…and I quote “A WORTHLESS PIECE OF S**T”.

No one should be called that for accidentally dropping her handbag.”

“Old reference, but, Gary Burghoff AKA “Radar” from MAS*H.

Apparently he was notoriously hard to work with and generally an a**hole to the movie and show cast and crew, but his character was so beloved that viewers never thought he was like that.”

“From what my fiancé told me is that Beyoncé is extremely entitled and rude to people.

He worked in a restaurant were many celebrities would go to and he loved most of them but absolutely h**ed Beyoncé and Jay-Z.”

Very difficult guest who made a lot of demands, didn’t say please or thank you, snapped her fingers at people to get their attention and was very loud.”

For those who want to know, watch his interviews on women and atheists.

He’s cheated on his wives, he’s physically a**sive, acts like religion is the only thing that between him and k**ling and r**ing people.”

I met her, briefly, while working Events at Universal Studios FL. Back in the mid 2000’s she would on occasion film her talk show on location at Universal. My job would call for me to interact with Ellen and her crew for prepping and crowd control measures.

There were 2 occasions that raised an eyebrow. First was behind set, the show was getting ready to start and I went back to tell her crew that we were ready for her to make her way to the stage where her show was being recorded. When I walked back there I saw Ellen yelling at a crew member, inches from his face.

She was belittling him and threatened to leave him in FL. Second occasion was brief but impactful. One of my coworkers was standing somewhat close to her, back to back with her. Ellen turned around, looked at her with a look of disbelief and after a couple seconds said “aren’t you just an invader of space”, she scoffed and walked away. We were both looking at each other thinking wtf is her problem.

So for all those years I always thought of her as a phony while all of America loved her. I was not surprised when all those stories of her being awful to work with came to light. I already had experienced it.”

Do you have anyone to add to the list?