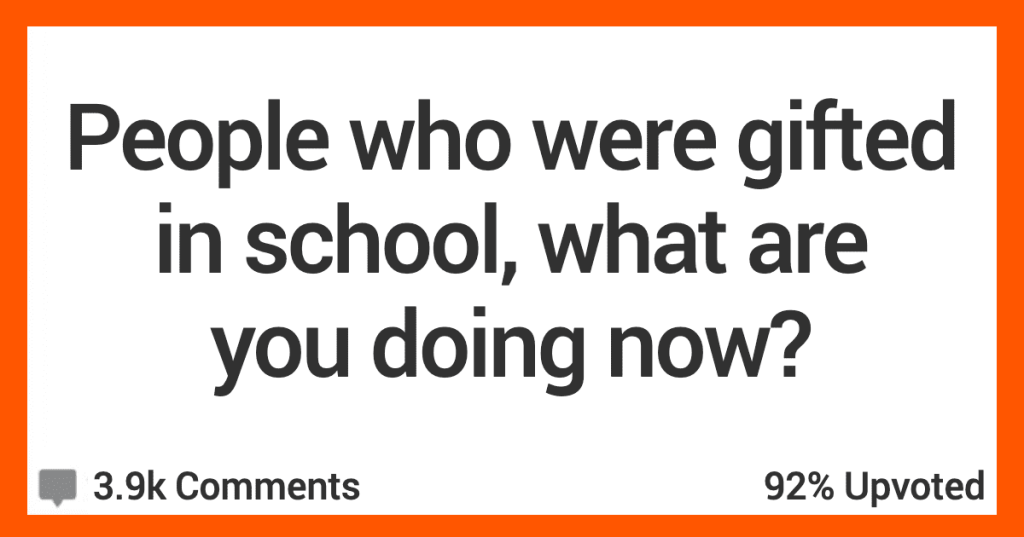 I keep up with some of the gifted kids I went to school with on social media and some of them are doing some pretty impressive things!

Check out what people who were gifted in school are doing now with their lives.

I can count your change like a motherf**ker, though.”

“I crawl around in sewers, ducts, manufacturing facilities, and research facilities to calibrate, repair, and certify atmospheric monitoring equipment.

And I drink more than I should.”

“Physicist and electrical engineer, working as a software engineer.

I’m ready to retire, my brain is fizzling out.”

“Got an undergrad in philosophy. Then law school. Then corporate contracts attorney for 10 years.

Now I do contracting IT, workflow and process design for corporate Legal and RevOps departments.

It pays the bills and is challenging, but it’s not a passion. I don’t think I ever really found a passion. Probably never will. That’s ok, I think.”

“I have a PhD and teach university.

“Severely mentally ill & have never liked anything long enough to make it into a career. People are mean to me, I cry or snap.

When people are nice to me, I cry. I’m very easily confused & overwhelmed & I h**e myself more than words can express.”

“Not unemployed but I have a lot of anxiety and fear of failure. I only start things when I can guarantee success.

For example, I’ve been wanting to learn Python but the fear of not doing  well stops me every time.”

“I did great for a while, but I got broadsided by schizoaffective disorder in my teens and my life went very poorly for the next twenty years or so. Had to get a GED, was homeless for a while, drugs, punk band, that sort of thing.

But I just started a writing career, it’s going very well, I’m winning awards and s**t. I’m still working on getting off disability, though (very few people can make a living as a writer, there’s no money in it).

I’m trying to see if I can go back to school and maybe work in editing, which I’ve freelanced in a bit.”

“I got really depressed in college, lost my scholarships, dropped out, wasted a few years, went back to finish my degree while accruing massive debt, couldn’t find a job because I’m bad at networking.

Joined the military, and then between the military programs that exist to uplift enlistees, and my TS clearance, I was finally able to separate and get a pretty good paying job as a geophysicist.”

Didn’t grow up with much money, went to CC then a state school where I could live at home. Honestly not growing up with a lot was a pretty good work driver the first 40 years. We didn’t have money but my parents valued education and valued hard work.

I saw how hard they worked and as a kid I was sort of lazy but money driven. Turned into a habit and that worked for me.”

“Back in the 1970s in the country where I grew up ‘gifted‘ kids like me were taken out of class a few hours a week and put into a special program. I hated this.

After doing well at high school I did an apprenticeship and became a tradesman instead of taking up a university scholarship. I really copped it from family for making this decision. ‘Wasted potential’ was their verdict.

Injured my back and shoulders after 11 years in the trade and was told I would have to stop manual work.

Went to university for 9 years and mostly breezed through 4 degrees culminating in PhD. Did some part-time lecturing and other office work during this period. This whole time I felt lost as I felt that being a woodworker was my identity.

During this time MRI technology became more widely available and I was able to get my shoulders sorted.

Been back on the tools for 12 years now. I still have a lot of back pain but I manage.

I feel lucky everyday that I am a tradesman and not an academic. This is what I am suited to and it makes me happy.”

Do you know anyone who was considered gifted in school?

What are they up to now?

Give us an update in the comments!