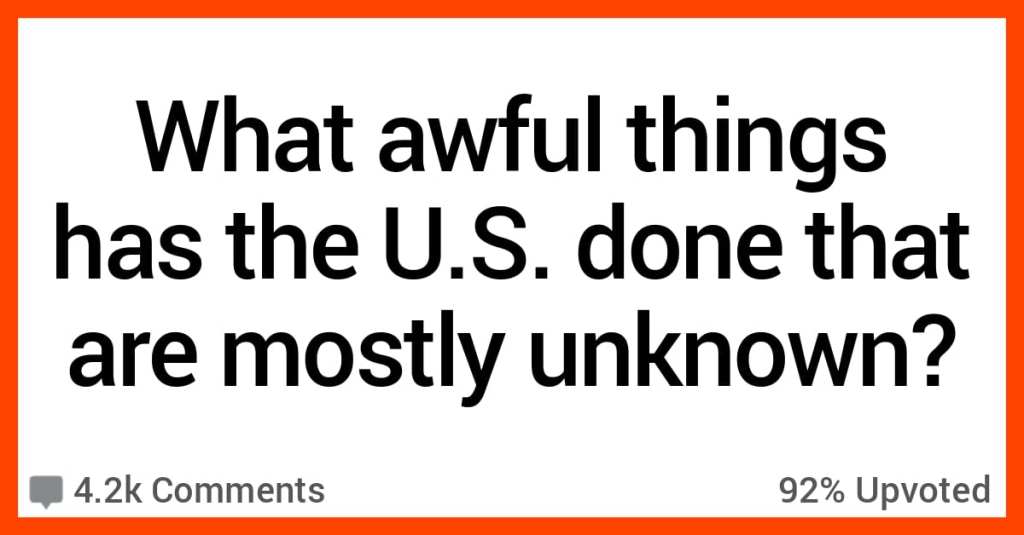 13 People Discuss Awful Things the U.S. Has Done Throughout History That Many Folks Don’t Know About

I’m not excusing the terrible things that the U.S. government has done throughout the years, but I think that one aspect of being a superpower is that you do everything to maintain that power and act in your own best interest.

And that includes terrible things that don’t age well…and probably some current things that we’ll learn about later, as well…

Unfortunately, that’s how the world works.

Folks on AskReddit talked about the bad things America has done that many people don’t know about.

“In a lot of southern states even up into the 1970s, Black people would be sterilized without consenting or even being informed when they would go under for an unrelated procedure.

This was meant to help curb the growing Black population.

Look up a “Mississippi appendectomy”.”

“For 40 years, under the guise of “providing healthcare” the United States Government intentionally left syphilis untreated in members of the African American community in order to study the long term effects of allowing the disease to fester. The test subjects were explicitly lied to and told not to seek treatment outside the study.

This wasn’t some 1800s or some Jim Crow s**t. This was from 1932-1972. There was not even an official apology until 1996. And not a single person went to jail over it. And thanks to something called “Sovereign Immunity” and “Qualified Immunity” the victims were not even allowed to sue for damages.”

The U.S. invades Panama to overthrow a dictator of its own making, General Manuel Noriega. Noriega has been on the CIA’s payroll since 1966, and has been transporting drugs with the CIA’s knowledge since 1972.

By the late 1980s, Noriega’s growing independence and intransigence have angered Washington … so out he goes. (Noriega was not democratically elected and his removal was not done by democratic means either, just US being US)”

The CIA replaces Allende with General Augusto Pinochet, who will torture and m**der thousands of his own countrymen in a crackdown on labor leaders and the political left.”

“The MOVE bombing in Philadelphia in 1985.

After a firefight with the occupants, police bombed the building from a helicopter, “targeting a fortified, bunker-like cubicle on the roof of the house,” and setting the house on fire in the process.”

“The land mount Rushmore is carved into is considered sacred to the Native American Sioux tribe, and was supposed to be part of their reservation.

Then someone found gold on it, and it got tossed onto the ever-growing pile of broken treaties with Native Americans. The battle that took place over this became the Wounded Knee Massacre, where American troops k**led hundreds of unarmed women, children, and men.

Oh, and then we carved a bunch of our presidents faces into the mountain, almost as if to add insult to injury.”

“During the Mexican American war, people called Tejanos who lived in what is now Texas helped the US fight the Mexican government. When Texas was finally annexed, southern slave owners kicked out the Tejanos who fought in the war.

This was especially evil, since there were Tejanos who helped the US in some major battles, like the Alamo. There are a lot of details I’m leaving out, but a YouTuber named Kraut made an excellent video about the Mexican-American border that goes into more detail about this stuff.”

“The US government through the CIA imported coc**ne in order to fund the Iran-Conta affair.

That coc**ne was allowed to be turned into crack and spread in black communities while the money went to overthrow democratically elected governments in South America.”

“The stock market is a lie.

Hedge funds are allowed to naked short-selling companies to the ground (basically creating and selling counterfeit shares of other companies) and the SEC and DTCC are complicit in allowing it to happen.

This allows institutions to manipulate a stock’s price by altering the supply and blasting it on the news cycle.”

In 1800, there were an estimated 30-60 million bison in America, ranging from North Carolina to California, although mostly they were concentrated on the Great Plains.

They came through and slaughtered them by the thousands per day. People going west just used them for target practice and left the carcasses to rot. The idea was that the more bison died, the more Indians starved and the more open range for homesteading.

If it wasn’t for a small herd in Yellowstone that became protected when the national park was established in 1872, bison would be extinct.”

“After the Pearl Harbor attack, the United States sent people of Japanese ancestry (112,000 approx.) to internment camps and seized all their assets without any due process.

When the war was over, these people were destitute.

It wasn’t until 1988 that the US acknowledged that this had been a violation of these people’s rights. Whoever was alive at the time received $20K in reparations.”

“The mass forced sterilization of Native American women in the 1970s, without their knowledge or consent.

Women would go into IHS under the impression that they were receiving an unrelated surgery. Years later, some of these women would try to have children and find out that a hysterectomy was performed on them without their knowledge, and for some, their entire uteruses were removed.

Why? The US government targeted full blooded Native women, claiming that they were doing them a favor by not allowing them to reproduce.”

“The Western Shoshone land theft in Nevada. The most prominent parts of this took place in the last 50 years. The last big court battle was in 2012.

The government basically said that since the Shoshone did not violently fight against the bureau of land management and white ranchers it meant that they ‘voluntarily’ gave up the land—ignoring there was a treaty signed.

Meanwhile, Native Americans are considered trustees of the government (alongside the mentally unstable a minor children), so guess who was their official voice to object? The Secretary of the Interior….who also runs the bureau of land management. It gets worse.

The Indian Claims Commission awarded the Shoshone what amounts to less $1.05 per acre for the land that was ‘voluntary acquiesced’. The Shoshone wanted to object, but guess what? They are trustees and the government who wants this issue to go away is the one who also gets to speak for them. So the Secretary of the Interior accepted the settlement despite the mass objection.

Then the Supreme Court several years later essentially said the Shoshone waived the right to bring any case based on this land grab because they had already been paid once the Secretary accepted it in their behalf.

The total land lost? 25 million acres, 40,000 square miles or 101,000 square kilometers. Most of the state of Nevada and large portions of Utah and California.

What happened next? 64% of the US total gold production now comes from mines on these lands subsequently leased by the bureau of land management, the largest of which destroyed a thousand years old sacred Shoshone religious, cultural and burial site. This was approved just days after the final court battle. It was built in 2008.

This Shoshone land is the second-largest gold producing area in the entire world.”

What are some more awful things that the U.S. has done that most people aren’t aware of?