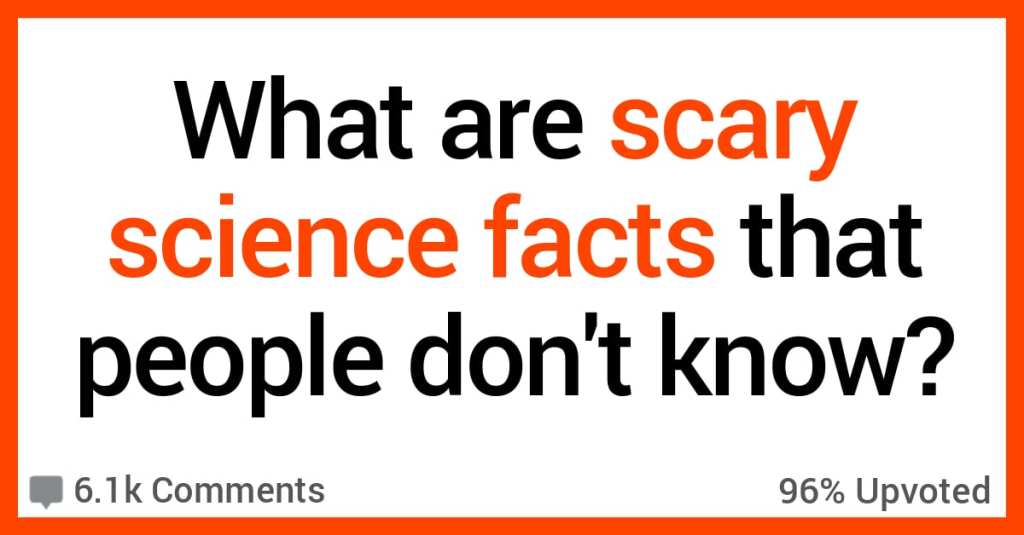 The study of science and the findings that researchers uncover about our planet and beyond are constantly evolving.

And if you’re not a scientist by trade or an armchair enthusiast, you probably don’t know THAT much about what’s really out there…and it can be downright creepy.

Are you ready to get scared?

What are some scary science facts that most people don’t know about?

We are degrading, polluting, and losing our topsoil at such a rate that we may not be able to produce enough food to feed everyone within 50-60 years, let alone what impacts climate change may bring to bear on our food supply.

And the US government’s crop insurance programs and incentives all reinforce the bad practices, while discouraging regenerative practices. These bad policies are extremely hard to change because of lobbying from the major agribusiness companies, who make money off of these short-sighted policies.

Our food supply is further threatened by our agricultural over-dependence on aquifer water, which is not being replenished, making it an unsustainable source of water. If the aquifers are over-drawn, depleted, or polluted, we hit a hard wall of water scarcity, and we will have no back-ups to address the problem with.

The drawdown of the aquifers also causes land subsidence, which causes costly infrastructure and building damage.

The general public does not realize the impending crisis that will be caused by the confluence of these factors.”

“There’s a solar event known as a CME, or a Coronal Mass Ejection, it occurs very frequently on a cosmic timescale, every few decades to centuries there’s a decent size one.

Why are they scary?

A CME is a massive burst of radiation, easily able to fully envelope the earth in its path, and it’s the equivalent of a non-stop EMP barrage. The last time a big one hit earth, was when we had telegraph lines for communications and they spontaneously caught fire.

In today’s world, with everything running on electricity, when the next big one hits we’ll have at most a few days warning, and it’d be a literal apocalypse movie scenario, with planes going down due to their whole electrical system frying, nobody’s vehicle starting, untold billions in fire damage would wreak havoc everywhere, and the machines we depend on to help would be similarly fried.

Some stuff would be unaffected, being parked in deep, concrete roofed parking garages and the like, but our entire infrastructure would be useless for years, it’d literally send us into a mini dark age while people tried to get things working again, recovery would take decades to centuries.”

There are tanks of it on every highway.

If one ruptured it would be a toxic fog that would k**l you very painfully.”

“Antibiotics has been abused and misused for so long, that various bacteria strains have started to get resistance to them. What used to be a treatable infection, might soon become d**dly because we are unable to treat it with the antibiotics we have today.

There is research to try and find other ways to treat antibiotic resistant bacteria, but until then, please use prescribed antibiotics until they are finished (not until you feel better), if unsued do not flush them down the toilet or put them in the bin (give it to a pharmacy so they can discard them correctly), and use antibiotics when necessary (some countries give them willy-nilly while others are more conservative).”

If humidity gets too high, relatively low heat can k**l humans. The equivalent of 95°F/35°C at 100% relative humidity can k**l even healthy humans. This is called a Wet Bulb Event.

“Smallpox is really easy to bring back and it’ll k**l 1/5 of the planet when it happens. Takes some genocidal anger, knowledge tens of thousands have, and about $100K. Here’s all the ways it could happen:

1) US or Russian stocks leaked or used as bioweapon (we keep some intentionally, it’s very secure. This is unlikely IMHO).

3) Intentional release via re-creation. Someone resynthesizes it from scratch via public sequence according to this paper with about $100K in materials. Methods + difficulty identical to what is published here. It’s totally possible, almost simple to do:

Smallpox powder dropped in envelopes mailed around the world by a disgruntled underpaid PhD student (see Aurora Colorado shooter). Outbreak is out of hand before it’s noticed, billions d**.”

7. Never heard of this one.

“The clathrate g** hypothesis scares the s**t out of me. Basically methane trapped within ice, primarily under permafrost and on the ocean bottom.

It’s kinda like the supervolcano of climate change, not likely but very bad if it happens. Methane is way worse than CO2 and more important it is faster acting, which could cause a runaway affect.

But it’s not likely for a number of reasons, including the stuff in the ocean is buried.”

“The government protocol for disposing of nuclear waste is to pack it with kitty litter in barrels and bury it.

If the wrong brand of litter is used it can cause massive environmental problems.

This mistake has been made before.”

“I have an interesting one about the New Madrid fault. In 1812, it faulted causing the Mississippi to flow north for a short time.

When there’s an earthquake in that area that is substantial it shakes the river plain. The river plain is more like jello than solid land. This causes it to come loose resulting in “sand blows”.

If you’re ever in that area you can still see areas of sand that have been pushed up for these. There’s also Indian legends of this fault being active so it’s odd it’s been dormant for so long.”

“The corpus callosum, a fibre matrix that connects the left and right hemisphere, is responsible for enabling fluid communication between language ability and spatial ability.

However once severed, either hemisphere essentially become independent of each other, leading to a sense of dual consciousness where the right brain controls the left side of the body and vice versa.

The scary element is not simply that you’re now controlled by 2 independent spheres, but that consciousness is a physical, tangible and divisible part of you.”

“The Yellowstone caldera has migrated over millions of years due to tectonic plates moving. This has left a giant scar across all of southern Idaho that can be seen from space.

You can see it for yourself on Google earth. It shows you just how big the caldera is and a small idea of how bad an eruption would be.”

“There is a glacier in Greenland that has been melting in an unexpected way, giving it the power to flood manhattan, the Netherlands, LA, Vancouver and other coast cities within months of breaking off.

Climate models suggest up to 10 meters of sea level rise with this sucker.”

The world’s climate is driven by the Meridional Overturning Circulation, what you might’ve heard of as the “Global Conveyor Belt”. Essentially, this is the formation of cold and salty deep water masses near the poles (North Atlantic, Antarctica) that sinks to the bottom of the oceans, that then upwells in regions like the Indian Ocean and the subtropical Pacific.

Thanks to the melting of the Greenland Ice Sheet, there’s going to be a lot fresher water in the North Atlantic.

Do you know any super scary science facts?