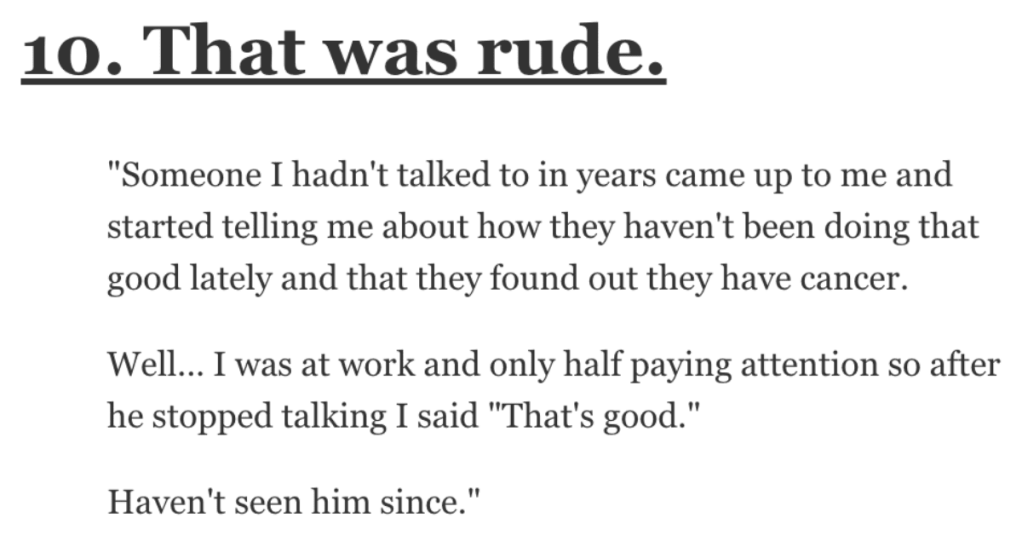 13 People Share the Moment They Realized They Were Total Jerks

We all have those times in our lives that we look back at and cringe a little bit.

Times when we weren’t especially nice to other people or maybe we felt overwhelmed by life and lashed out at someone.

So what was a moment when you realized you were being a jerk?

“Years ago I went into a Hot Topic and as I was at the register, the girl working started telling me about all the new Metallica shirts they had gotten.

For some reason, I told her I wasn’t really into wearing band shirts anymore, which was mostly true, and even though I didn’t mean to, it came out sounding really snobbish.

At the time, I thought her reaction was kinda strange, even accounting for my accidental condescension. Shortly after I left the store I remembered I was wearing a NIN shirt.”

“I was driving down a road and a lot of people were honking and yelling at me on the street.

I got angry and flipped a bunch of people off and honked back.

At the end of the street I saw a one way sign and realized I was going in the wrong direction.”

“In early high school, late 90’s, so if you got a girls number it was the house number- I called a girls house and her dad answered.

She was out, but I noticed his speech was a bit slow and slurred. Next day at school I mentioned I had called, and asked if her dad had been drinking….well turns out he didn’t drink much since his stroke.

Still feel awful about that!”

“I was drunk at a pub and shouted for the band to play Free Bird.

They stopped in the middle of the song they were playing, started up Free Bird and called me up on stage to sing it.

I froze, forgot all the lyrics and made an absolute *ss of myself.

Props to that band though.”

“I was making fun of an old guy I’d seen outside our school at a basketball tournament to some friends in the locker room. He looked and talked like Farmer Fran from the Waterboy.

Turned out to be the dad of one of the guys I was talking to. Still can’t even think of that movie without it bringing up endless amounts of shame.”

“At my former job my boss was looking out the window and saw this guy get out of his car and head towards out front door.

Boss told me later “that’ll teach me “ and facepalmed.

Co-worker wasn’t mad, he agreed FIL looked like a hick.”

“”Broke up” with my first girlfriend who was really attached to me, just by ignoring her.

I feel so bad.

I was just a kid but that was a harsh treatment.”

9. Never too late to change…

“When I realized the reason I’ve lost so many friends is that I’m so sh*tty at getting back to people.”

“Someone I hadn’t talked to in years came up to me and started telling me about how they haven’t been doing that good lately and that they found out they have cancer.

Well… I was at work and only half paying attention so after he stopped talking I said “That’s good.”

Haven’t seen him since.”

A kid had been absent a few days, and when he came back, I started razzing him a bit. We were friendly, but not friends, so I felt okay kidding around, claiming he was just pretending to be sick to get out of class, that sort of thing. Nothing really mean, though.

He took it for a bit, then turned, looked me dead in the eyes, and said in the flattest voice “No, my mother died.”

And turned back around.

If God had struck me dead with a bolt of lightning, when I stood before him at the Pearly Gates, I’d have said “Yeah, fair enough…””

“I was in the Army, making fun of a guy, said he couldn’t even get a medal for something in the special Olympics.

He then pointed out his daughter was in the special Olympics.

I profusely apologized, and he accepted, but it still keeps me awake at night.”

“My friend group tried to stay close after high school but we all fell out of touch as you do as everyone forged their own path in life. Well, mine led me down a path of depression, anxiety, and failure.

So every year or so they would hold a get together to reconnect and hang out. I attended a couple of these, but as time went on and my downward spiral got worse I stopped responding to calls, texts, invites, etc. because I thought that no one would want to hang out with this version of me.

I was invited to two weddings which I didn’t even respond to because of this negative loop, and then when my best friend from that group was diagnosed with cancer I couldn’t even bring myself to face him, I tried to go to his funeral but couldn’t enter the building because I felt that I didn’t deserve to be there.

Finally a few months ago the parents of one my friends saw me at work and wanted to talk to me. They told me that my friend group was really broken up that I ignored all of their attempts to reach out to me.

It was then that I realized that in all of my stress about being miserable to be around, I had become an *sshole to those who tried to care about me.”

Have you ever had a moment like this before?

If so, please tell us all about it in the comments.

We’d love to hear from you. Thanks!