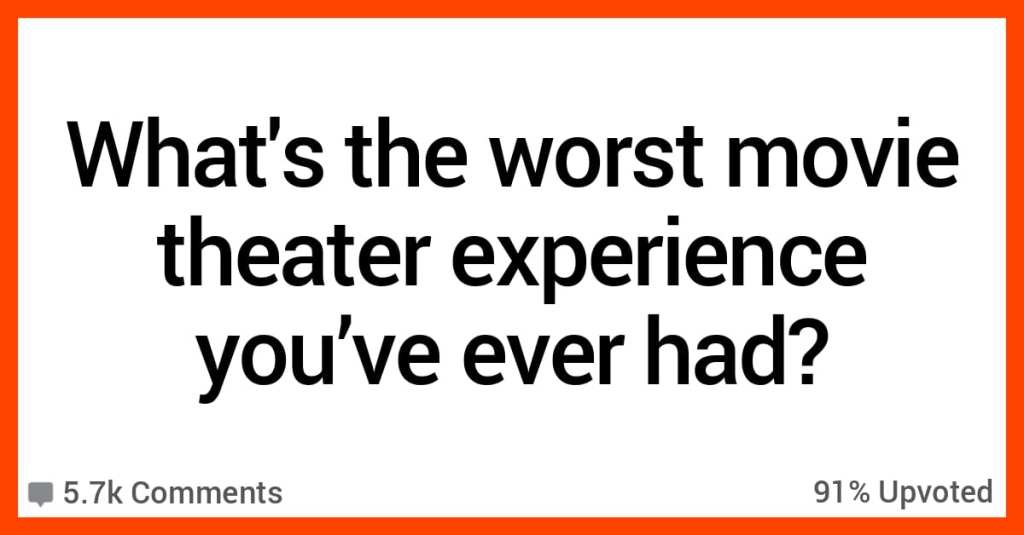 Have you ever a really terrible time at the movies?

A time that was so bad it made you never want to go back?

Well, we’re about to read a whole bunch of stories from folks who had really bad movie theater experiences.

Let’s dive into some stories from AskReddit users about their worst movie theater experiences.

“Was watching Aquaman with my sister and there was a couple behind us. The girl was clearly unaware of superhero films.

During the fight scenes she asked him very loudly where Ironman was. And when it was the intermission, she asked him angrily when Spiderman was making an appearance.

Turns out she was into Tom Holland and her boyfriend told her he was in Aquaman to get her to come along. They fought for a while.”

My friend group decided that we’d see it as a joke and Jesus Christ I swear we left within the first five minutes.

We wanted to gouge out our eyes.”

3. Not a pleasant viewing experience.

“I was watching “Sweeney Todd: The Demon Barber of Fleet Street” with my mum and sister. To make the movie viewable to most audiences, my city’s censor board had cut off scenes.

So all the throat slashing was cut off and it was annoying as hell. They replaced those scenes with random shots from the same scene. So the lip syncing was off at most places. They didn’t even show any blood.

And sitting a little away from us was a group of young teens who got annoyed every time a song began. They would tut and make sounds and ask things like “why are there so many songs” or “another song?” and my sister at one time was so frustrated that she yelled back saying “It’s called a musical for a reason.””

“It was in the middle of the movie, people starting yelling at some guy for sneezing to loud and the person above me turned around too fast and spilled a bunch of pop on my head.

I finished the movie and they guy gave me money to get something because he felt bad.

5. Are you still together?

“First time at the cinema with my boyfriend – he talked more to the stranger next to him than to me – before, during AND after the movie.

Sh*tty experience for me… If I hadn’t been in a foreign country I would’ve gotten up and left before the movie even started!”

“I was on a first date with a guy I really liked. Towards the last quarter of the movie, I had to pee very badly.

So I get up and start trotting towards the exit, but when I’m halfway across the theatre, LITERALLY FRONT ROW CENTRE, the heel of one of my shoes broke.

I went sprawling face first onto the floor. In front of the ENTIRE (pretty packed) movie theatre. There was no second date.”

“As a teen, I went on a double date with this guy who kept asking me out. My sister’s BF insisted that he’s really a nice guy when you get to know him.

We saw “Shampoo” the Warren Beatty film. It was really raunchy and inappropriate for teens. Adults were walking out indignantly with their young children (you guessed it, there were no warnings then or rating system).

I was mortified because he kept laughing at the worst times, and slapping his knees and all that. My sis and I wanted to leave, so we ended up leaving early.

Needless to say, I never went out with this guy again.”

“Once I went to a movie with my sister and my friend. We were seated next to a woman and her ex-husband.

She spent almost the entire movie complaining to him about how he never posted anything on Facebook about her anymore, and that he always tagged his new girlfriend in his posts. The poor guy stayed pretty quiet the entire time while she cried and whined.

I’m not surprised he divorced her.”

“Years back sitting in the theater and saw a flicker of light off to my right in the row behind me. Guy had tossed his cigarette butt and it rapidly took off in the theater floor litter.

Everyone got out OK but it was exciting for a bit.

10. What is wrong with people?

“I was in a movie theater once with my family and little nephew and we were watching Monsters Inc.

Around 20 minutes into the movie, we started hearing some strange noises that were reminiscent of moans. We tried to ignore it but they became louder and I got up to see what was happening when someone yelled “OH GOD YES”.

Needless to say when I got down there I discovered a man and a woman, engaging in s*xual intercourse in the middle of a children’s movie.

“I was 15 and dating a guy whose family collected vintage cars and drove them in parades etc. He picked me up in a Model T pickup truck.

It was cool and exciting. He took me to the drive-in where we watched Deliverance. Midway through the movie, my date absolutely freaked out, went hysterical, thrashed around and finally jumped out of the vehicle, leaving me totally confused and clueless.

I’m like “WHAT??” and he finally gasped out “SPIDER!” Yeah, first date was last date…”

“It was my first time in a movie theatre (not counting those crappy ones that schools say are movies) and I was with my friends. It was a new film and we were all really pumped to see it.

Well… Turns out it was a 3D movie and we had to wear those glasses. Which is fine, except for one flaw… I wore glasses myself and those 3D ones did not fit so I had to sit in a movie theatre with one hand holding my glasses up to see the actual screen.

Then someone bumped into me while I was holding a Slushee (I think) and it spilled. Aaaaand then there was a thunderstorm so the power went out for half an hour.”

Okay, now it’s time for YOU to entertain US.

In the comments, share your absolute worst movie theater experience.