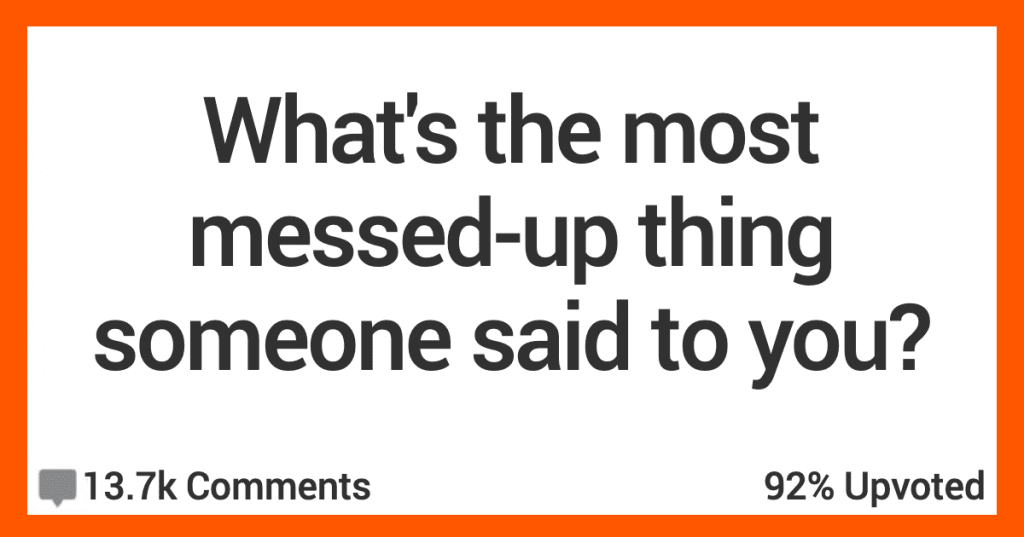 Have you ever had someone say something so rude to you in a totally casual manner that it really p**sed you off?

I think most of us have!

And today we’re gonna hear from regular folks like you and me about stories just like this.

Check out what they had to say on AskReddit.

“When I was 17 I worked in a warehouse and was unpacking a large box of miscellaneous hardware that involved a lot of bending over.

My boss’s boss’s boss (who was in his 50s at the time) told me I should leave it for tomorrow and wear a short skirt to work the next day.”

“I was 15 at the time. We had new neighbors move in and the dad was super creepy towards me.

He always commented on my outfits and even asked me to dinner once. I was thoroughly freaked out by him and one day, his wife and daughter just…left. He was out of town for a few days and they got a moving truck and skedaddled. It was odd to say the least but even being that young I had suspicions that he was inappropriate to his daughter.

Anyways, when he got back he was completely blindsided and came over asking us if we knew anything. He said to me, in front of my mom, that “I should come over to cheer him up sometime” to which I promptly bailed and went inside. Later that afternoon I tried to talk to my mom about how creepy he was and that’s why I thought his wife and daughter left, and she said to me, ” Well you sit outside looking like a slut all the time, what do you think he’s going to say to you??”

I still have many issues with her. That was only one of the many times she called me a slut and it greatly affected my self esteem for a very long time. Part of me wants to bring it up and get some kind of closure or maybe even an apology but I know she’ll say it never happened or I’m being dramatic.

I have a teenage daughter and I wouldn’t dream in a million years to ever say anything so damaging to her, and if a creepy guy ever said anything like that to her I would put his a** in its place quick as hell.”

““Hey, get in here! There’s a woman on Seinfeld who is just like you!”

My dad to 14-year-old me, referring to the woman in the “Man Hands” episode. I was struggling with an awkward growth spurt at the time.”

“A lawyer in my office (he rented an office in our building, my boss owns the building) last winter. We were expecting to get a snow storm, so we were packing up to go home early and work remote.

This lawyer told me that we should all stay at the building so we get snowed in, get naked and sleep together upstairs. I’m married with a child (who he’s met) he’s married for a verrrrry long time and has kids and grandkids. More inappropriate stuff has happened since then and he’s now banned from entering our building.”

“My mother looking at me, saying I d**d with my brother after two days of his d**th.

Blocked me on everything, and changed everything. Moved as well.

“I was groped at a shopping mall on the way to meeting a friend and her boyfriend when I was about 14/15.

When I met them I told them what happened, my friend was saying how sorry she was and her bf pitched in and said “I don’t feel sorry for you, I feel sorry for the guy for having to touch you.” Right to my face.

Idk if he thought it was witty or what. It was just such a casually cruel thing to say.”

“Had an ex who requested that I keep the push-up bra on during the fun times because my breasts were disappointing, “like opening a bag of Lay’s.””

“When I told my grandmother I was engaged she said “oh I’m surprised he wants to take an invalid for a wife, poor man.”

I have chronic fatigue syndrome.”

“When we were renting rooms from my father in law he told me that he’d listen through the office wall when me and his son were having s**.

He also used to have p**n playing whenever he called me into the office to talk about something.”

“When I was 16 was on my way home at night and saw this old man with a dog and started petting his dog.

After a minute the man said “I wish you would pet me like you pet my dog”. I was stunned.”

Adoption is very real, you twit.”

“Multiple people have said they’d rather d** than live like me.

I may be disabled and walk with a cane at 32, but I still live a good life and my life it worth living.”

“I remember a guy stopped me in the town and started casually talking about all the bl**job bars and brothels in Thailand.

Like he talked about this for a good 5-10 minutes expecting me to think that hiring pr**titutes and talking about women in a degrading manner would be something I’d be up for at 7am on a Sunday.”