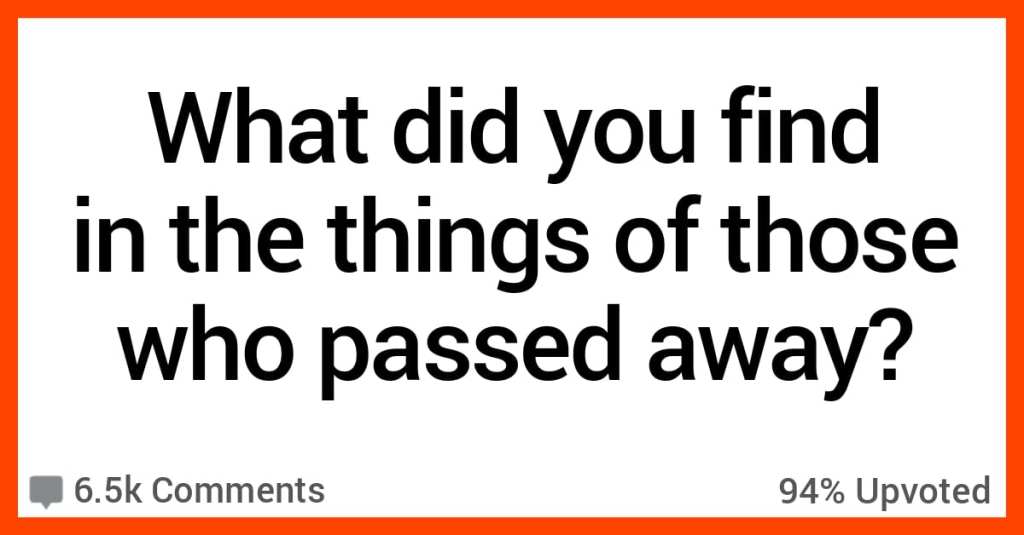 Maybe it’s better to leave the cleaning in these kinds of situations to strangers…you know, just in case something embarrassing or humiliating is found in their belongings.

That way, family members and friends won’t get too embarrassed and won’t potentially have their opinions of their loved ones changed too much.

But these kinds of things sure seem to happen a lot…

Have you ever found anything weird when cleaning out the home of a person who passed away?

These people did and they shared their stories on AskReddit.

“When my grandma passed away, we found some craaaaazy things including her gallstones, a chicken bone with a note that explained how it had ki**ed her dog (at LEAST 30 years ago), a box of mincemeat from the 1960’s, iguana food (she was terrified of reptiles), and an unbelievable amount of stuff all fit into a small mobile home.

We knew she was a pack rat but never to the extent that we discovered.

When my family was cleaning out the home, everyone was hiding all of the weird stuff in other peoples vehicles and bags without their knowledge. I personally stuck a terribly made stuffed squirrel (we named it “zombie squirrel”) in my parents’ breadbox to scare the hell out of them upon their return from snowbirding. It worked. I wish I could have seen it happen but hearing my mom describe it a few weeks after they returned was good enough.

Funny thing is, my family plays Christmas Bingo with cheap and funny gifts every year and these “antiques” have now ended up in the rotation, ending up in someone’s possession every year until they can pawn it off on another relative.

I currently have the mincemeat after discovering it on New Year’s Eve in a box of beer that I was gifted. It’s hard as a rock but still sealed in the original packaging, so I bought some epoxy resin and am going to cast it inside and make a trophy out of it so this insanity can continue.

“My Grandma had been a school nurse but had been retired for about 10 years or so at the time of her d**th.

As we were clearing out her old office we found index cards with d**d lice on them and labeled as to which kind they were.

We were all so grossed out.”

“My mother had a coworker who was the friendliest guy ever.

He was about 70, extremely nice, loved the beach, was openly gay, but didn’t date much in his later years. He passed away from a heart attack and had no living family. They went to his home, found care for his dog, then attended the funeral a few days later.

In his will he asked several close friends and old coworkers to take what they wanted of his things as the bank would foreclose on the home. He only moved in like 3 years prior. There were a few things specifically listed to go to certain people. Everything else was up for grabs.

It was all going fine. They opened drawers in the bathroom and found weed. The group of 5 or so people giggled. Then they went into the bedroom… They opened his nightstand drawer.

He definitely left one big last impression on those that were close to him.”

“When my best friend and her boyfriend d**d in a hydroplaning accident, I went to clear out her house since her family was out of state.

They should be grateful- I disposed of literally dozens of s** toys and a bunch of lingerie. I knew what I was going in there for, but I was still surprised by the overall size of the strap-on that was prominently displayed in their room.

Her boyfriend was a preacher’s son, so I also took all the drug paraphernalia out of their room so that his parents wouldn’t have to face harsh disillusionment with their son’s piety less than a week after his d**th.

He only smoked weed but that would have been scandalous enough to taint their memory of him.”

What made it worse was that I was supposed to sort through/ throw out his things, so I had to discreetly alert my grandmother ( I was not touching it) while keeping my mom in the dark.

My nana just cackled, went “ well he never through anything out!” And chucked it in the bin in her bathroom.”

“Crazy aunt who was a hoarder d**d.

Her house was cluttered but relatively clean. We were clearing out the house and throwing out used stuff and keeping or giving away new unused things. She used coffee cans to store receipts so we just started tossing them right in the garbage.

I dropped one after lunch and out popped about $2,000 in cash.

Went back and opened all the cans. About $12k and some very nice gold jewelry in all. Thanks Aunt Edna.

Oh, and two walk in closets full of unused yarn that filled up my Suburban. Twice!”

“That my grandfather had a complete family (wife, 4 kids) he abandoned when he knocked up my grandmother.

All the family knew about it but he threatened d**th on anyone who told my mom. They believed him. Only found out after going through his desk.”

“Notes on how to summon demons, some sinister books about satanic rituals and a collection of weird s**t (daggers, chunks of hair, some vials with powder).

My grandparents were incredibly devout Christians, so it was a pretty creepy find. My aunt ended up throwing it all out.”

“Found 40 cans of shaving cream in my brother’s linen closet. That must have been one hell of a sale.

Oh, and over 300 video cassettes. This was back in the VCR days and he recorded every show that he watched.

He wasn’t a hoarder, but a bit eccentric.”

“When my dad d**d, my sister and I went to his apartment with my grandmother. While I was flipping through records and such, grandma came out of the bedroom with what was very clearly a pot plant.

She said she didn’t know what it was and asked if I wanted it. When I eagerly accepted, her suspicions were confirmed and she disposed of it.”

“Pictures……of my mum…….in a compromising position with two other gentlemen…….and someone else to take the picture….. 0/10, do not recommend.”

“Back in the days when I was in Seminary, I was called by a family to help catalogue her things because this elderly woman passed away (she d**d at 103ish in 2008).

Her mother was 14 when Abraham Lincoln was a**assinated. She was pretty old. She refused to go to a nursing home so family agreed she can still stay in her home with an occasional visit from a medical helper and church volunteers.

I unlocked her apartment and I swear I thought I stepped through a time machine. It was such a shock, I had to sit down for twenty minutes and let it all sink in.

EVERYTHING in her house was straight from the 40s when her and her husband first moved in. It wasn’t even in bad condition….it literally felt like I was transported back in time to 1940 because nothing looked old and worn out.

The cabinets, the flooring, hell, even the appliances and little things like salt shakers and paper towel holders were straight from 1940. The wall paint wasn’t as old as the 1940s but she repainted it the same color over and over. The kitchen was robin egg blue, bathroom same color. The living room was wood, and the bedroom was white.

I walked though the entire apartment and everything was surreal. In the living room, she had a living room set from 1940 too. She only had two things in her living not from 1940. A 1850 Victorian piano and a 1970 Cabinet tv. Even her paintings on the wall was straight from the 40s.

The only other thing that was not from the 40s was her mattress. That’s it. Even her phone was a 1940 phone with her old phone number on it….”Ellicott City 4592”

She still had family albums on her nightstand (which I assumed she looked at all the time). It was pretty sobering because when I really thought about it, EVERYONE she knew in the prime of her life was d**d. All her friends, her husband, her brothers and sisters.

Everyone but her family 3 generations younger (she had no children). I flipped through the album looking at these pictures. Her husband served in World War 1 and assisted in World War 2. He d**d in the 60s. She even had an old church directory from the early 80s where she looked like a senior citizen….and she managed to live 25 years beyond that.

The landlord didn’t want to touch the interior at all, joking with me saying her entire apartment should be in a museum but the Complex Corporate owners ordered everything stripped down and updated to conform with the rest of the complex.

I don’t know if anyone here ever watched “Somewhere in Time” with Christopher Reeve but those were the vibes I was getting the entire time I was in there. Another interesting thing…all of her pictures that were set up on the walls and tables were of her and her husband from 60-70 years ago…like a couple of young newlyweds lived there and decided to make all their pics black and white and went with the retro vibe. Her more “current” pics were all stashed away in shoe boxes under the bed.”

“My husband’s first wife d**d of cancer a few years before we started dating.

When she d**d, he didn’t have the time or energy to deal with alot of her things so he basically just packed everything up into boxes and stuck them in the basement.

Years and years later, we were engaged and about to move so we decided to go through the boxes together.

We knew she was big into snow boarding, but we didn’t know how much until then. We found various pictures of her out on the slopes with Jake Burton (founder of Burton Snowboards), Mike Olson (founder of Lib Technologies which produces Roxy Snowboards and a few other brands) and David Kemper (founder of Kemper Snowboards).

Apparently she was tight with the pioneers of snowboarding.”

Have you ever found any weird items when you cleaned out a person’s house after they passed?