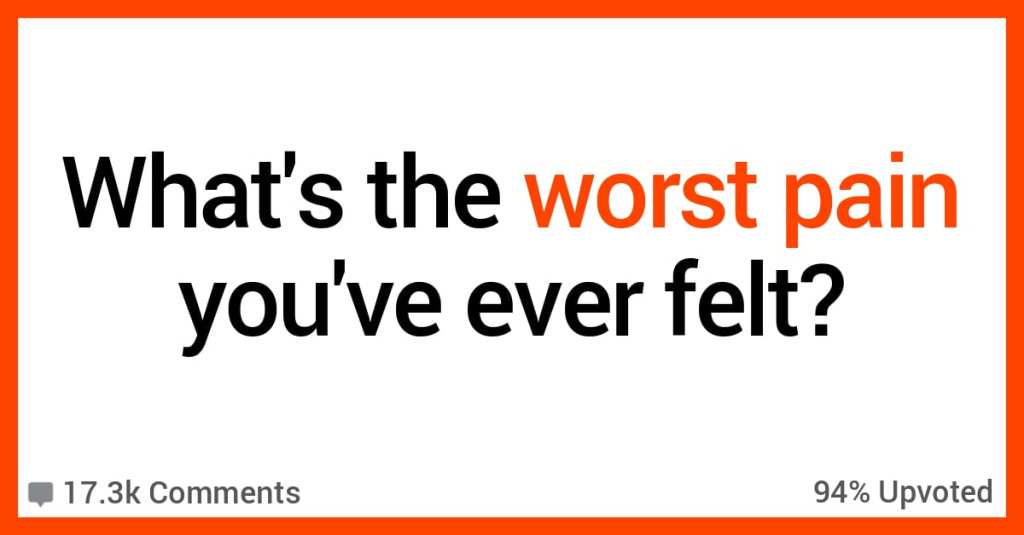 I have two answers to this question. The first was when I broke my hand in sixth grade. The second was when I had kidney stones when I was in college.

Both were pretty terrible and I hope I never have to relive those experiences again.

AskReddit users opened up about their most painful experiences.

“Tore an abdominal muscle once because I had a respiratory infection and wouldn’t stop coughing.

Because it was a core muscle, I could do almost nothing without experiencing excruciating pain.”

“When I was 12, I was hit by a car at 45 mph. The impact snapped my left humerus and shattered my left tibia/fibula. I was thrown 20 feet into a busy intersection.

In the ER, the attending decided to lift my broken leg without support in order to get a board under it. Everyone told him not to, from the EMTs to the trauma nurse to my mother (who had been an RN for years).

He did it anyway. The pain sent me into a grand mal seizure; every muscle in my body contracted – including my left tricep, deltoid, and trapezius*, which caused the jagged edge of my broken arm to slip its setting and move toward my neck.

I never once lost consciousness.”

“I was shot in an attempted carjacking.

Took a .45 hollow point point blank in my back. Bullet entered my back, collapsed my lung, paralyzed me and broke 2 ribs. To top that all off my foot was stuck on the gas and I hit a brick wall going 70 mph. Was in the hospital for 7.5 months, numerous surgeries and stage 4 bed sores.

After the swelling went down I was able to rehab and get back on my feet but still can’t run but not complaining. What doesn’t kill you makes you stronger, if you are lucky.”

Imagine 100 spiders itching all over your eye after the operation and for the following 4/5 days.”

But when I dislocated my left knee, that was by far the worst pain. My knee cap spun around the backside of my knee.

And took all the nerves and tendons with it.”

It was brief, but the worse pain I ever experienced. The nurses said I handled it well, then I proceeded to throw up at a stoplight while driving home.

Apparently some women only feel mild discomfort during the process.”

7. Those things are nasty.

“Got bit by a brown recluse when I was eight, which caused a staph infection on my back.

I had it for a week before noticing it, and when I got to the doctor they told me that if it wasn’t for the infection digging into my muscle I’d be dead already. He then told me I was in for some serious pain and told me to bite down on this leather strip. He had to push everything out of it and cauterize it. I have never experienced pain like that since.

And I’ve broken quite a few of bones, one of which came out of my skin. It was NOTHING compared to this. I passed out 3 separate times from the pain, and the police were called by the neighboring business because they heard “a child being brutally tortured”.

And this was with morphine and local anesthetic. My mom was crying her eyes out because she felt so bad about what was happening, and the doctor told me it was the hardest thing he’d ever had to do. The newest harry potter book had just come out, and was expensive, but my mom bought it for me and cooked my favorite meal of or THREE days in a row.

I’m not gonna lie, I was f*cking BAWLING when I had to go back for the check up on it because the doctor warned me that he might have to do it again if the infection returned. Which it didn’t. The doctor gave me the $50 my mom had paid for the appointment and said that he couldn’t accept money for what he did to me (still charged my insurance though).

Which I gave to my mom for the book (I usually had to work for the money for the harry potter books). Which my mom used to take our family out to dinner as a celebration for the infection not returning.”

I was in college and I got mono terribly. I had a high fever and my throat was mostly closed and I couldn’t swallow at all. Eventually everything just felt like a dull pain, until I’d move and it would become a very sharp pain.

I remember somehow getting to the campus medical ward, and the nurse telling me I was at a 10 pain level. In any case 2 IVs later and I was feeling a lot better.

Later on I broke two vertebrae in a car crash and the dehydration was considerably worse.”

“Being burned alive on 30% of my body and surviving in critical condition and then having to rehab in an ICU.

The searing neurological pain of repeated debriding to promote healthy tissue growth was so much worse than the initial burning.

This was 10 years ago and I literally started crying as I am writing this, just from how vividly I can remember the pain.”

“In my early 20’s I had 6 operations for a pilonidal sinus, for which there wasn’t ONE procedure that was 100% effective.

One surgery left the wound open and packed with gauze. A full bottle of gauze. The idea was to remove the gauze and the wound heals from the bottom up.

By the time the initial change of dressing happened over 6 hours had passed and the blood on the gauze had dried and adhered to the walls of the wound. It took 3 big orderlies to hold my legs still and I gripped the handrails of the bed so hard the IV popped out of my arm.

My dad said it was like watching a clown pull the endless rainbow handkerchief out of it’s mouth.”

“Was going about 50mph on my vespa when the car to the right of me decided that the right lane between two intersections was the best place for a u-turn.

I was luckily thrown clear, did a couple of flips and smacked into the pavement. No serious injuries except for some road rash and… a compound dislocation on my big toe.

Get to the ER and the doctor says, “if we can’t get this back in you are going to need surgery.” He then spends the next 10 minutes trying to force my bone back into the body manually with small breaks while he examines and tries to figure out why it isn’t working.

Turns out the bones in the tip of my toe were basically shattered so while he is squeezing my toe trying to shove the bit of bone back in the shards in the tip were just grinding together.

He eventually got frustraded and gave up. A young orthopedic surgeon came in later wanting to take a crack at it, first question he asked was, “has he gotten any morphine yet?” followed by, “why the f*ck not?”

Dr. Kim, I will be forever grateful to you.”

“Did surgery to remove my two wisdom tooth but the dentist just used 1/4 of the anesthesia dosage.

I felt everything and even nearly passed out when she got to broke my tooth in 4 pieces .”It’s gonna hurt a little bit”, she said. And I didn’t complain cause thought I was overreacting.

She also touch the nerve while removing the tooth pieces and again almost fainted. Got back to my house like I’ve had been violated, remaining in the fetal position for hours.

All this cause I had dental insurance and didn’t actually pay for the surgery.”

“Sneezed while holding my nose and blew out my eardrum. Guys, you know how your parents told you not to do that? There is a really good reason.

I was traveling on the subway when it happened and ended up rolling on the ground almost screaming in pain. I may have been screaming, I don’t know as I couldn’t hear it. Massive ringing in the ear, stabbing pain right into the brain.

Felt like my head exploded and it doesn’t go away. Pain was there for days, hearing loss was a heck of a lot longer although it does fade.”

What’s the worst pain you’ve ever felt in your life?