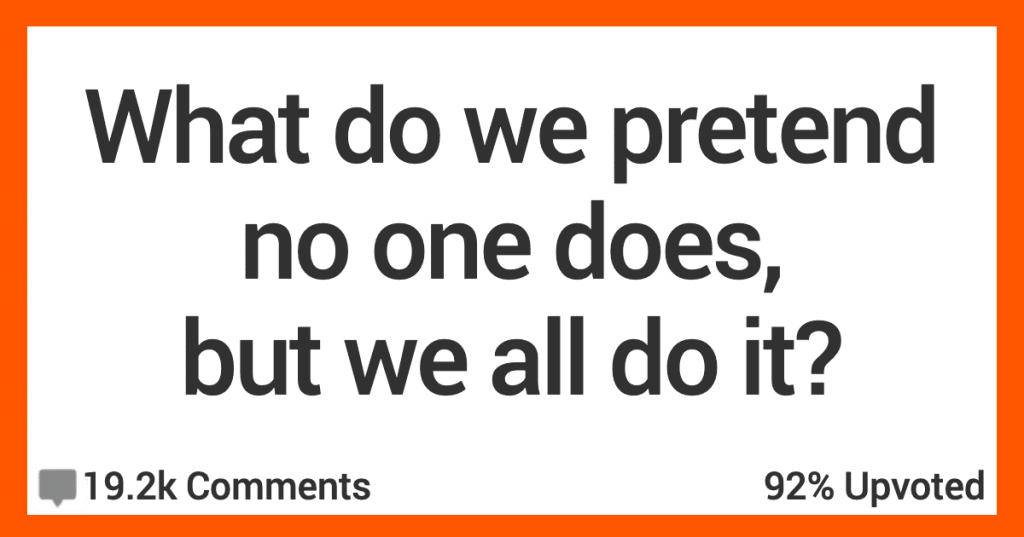 That phrase can be applied to a lot of things in life, even when people don’t necessarily want to admit it…

So what does everyone do even though they pretend not to?

Check out what AskReddit users had to say about this.

“Making up fake scenarios in our head.

I have literally cried over scenarios that weren’t real.”

“Make snap judgements about people based on their appearance.

This could be anything from race, gender, age, clothing, hairstyle, facial appearance, etc.

“When you go into an aisle in the grocery store and you see someone in front of the object you’re looking for so you pretend you’re getting something else all while hovering near them waiting for them to leave that area so you can get said object.”

“Convincing yourself in your head that everyone around you is doing things perfectly and at full efficiency and expect the same of the people around them.”

“Look up words that people use because we don’t know the meaning even though we pretend to when they are talking.”

“Making up conversations in my head before something important.

Like I will say this and then the response from other person might be this…sometimes it can go for 10-15 min before I snap back to reality.”

“When I was in high school and a teacher was talking to me I had intrusive thoughts of spitting on them.

I constantly wondered what was wrong with me. I realized later it was anxiety making up things to mess with me just for funsies.”

“Read messages from the notification bar then pretending you didn’t see the message only much later.”

Particularly to make us and others feel better.

“Complain about others speeding and saying they are going too fast for no reason but giving ourselves a pass because what we are late for is really important.”

Just to let the fact that you’re a modern day Shakespeare settle in.”

Because both sides must maintain the illusion that the other side doesn’t know that they know profanity.”

13. Nothing wrong with that.

No, when you ask what I’m thinking and i say nothing when you saw me zone out, I wasn’t literally thinking of nothing.

For that minute I was a a race car driver or an astronaut.

Yes I’ve made plans in my head on how I would go about trying to weigh my own head or how much I’d like to just wail in that crying baby’s face to see how it would react.

No I’m not going to say that when you ask me to my face, I’ll lie and say nothing, say nothing of importance or hit rewind till the last vaguely important plot point to say I was thinking about to save face.”