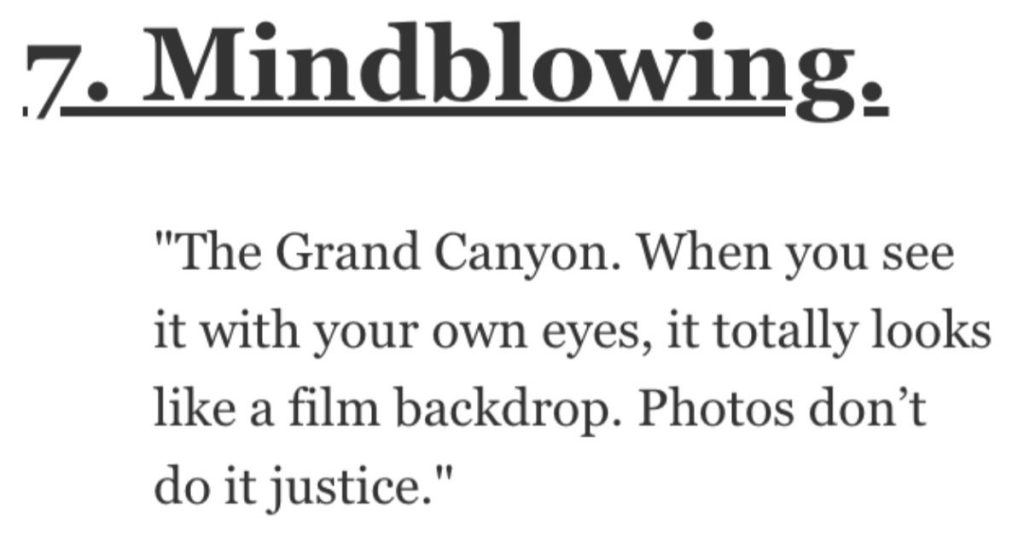 Have you ever been to the Grand Canyon?

I have not…but every time I see photos of it, all I can think to myself is how it doesn’t even look REAL.

Have you ever had that kind of reaction when you saw something?

These AskReddit users have and they were nice enough to share their thoughts with us.

Take a look at what they had to say.

First, against many odds a sperm finds the egg, then cells start dividing and differentiating into all of our complex organs and systems all while mom goes around living her life and carrying that inside her.

The fetus is totally dependent then bam! One day it’s time to emerge and mom’s body pushes it out of a previously small hole. Then, magically, the new baby is a whole separate person that somehow knows how to breathe!

Then mom makes a magic elixir called milk that constantly changes to meet the nutritional needs of a growing and developing baby.”

2. Still thinkin’ about it…

“A real in-season ripe peach. The ones that taste better than peach candy.

I stopped at a peach stand in Alabama 2 years ago and I still think about those peaches.”

I mean what even is that thing?

It’s like mother nature just hit the random button and just went with it.”

I don’t know if fake is the word I’d use, but it seems unreal, magical, or whatever word you want to use.

I can’t wait until we really pull back those layers and figure out what is going on.”

“Our body just magically self heals itself.

Have a gashing wound? In a few days, it’s closed up and you’re good to go buddy.”

Seems like it should be something that is manufactured but it is entirely natural.

It’s just there in the ground. 100% organic, natural, untouched by human hands.”

When you see it with your own eyes, it totally looks like a film backdrop.

Photos don’t do it justice.”

Birds, fish… I keep a poison dart frog as a pet, and his colours just don’t look like they should happen in nature.

Some animals look like they were painted that way.”

It is a massive bird. It’s eaten monkeys, it’s that big.

There are people who thought it was a person in a bird costume.”

“Honey. All you have to do is collect it.

Edible, delicious and healthy, straight from the bee.”

“Sauropod dinosaurs … 🦕 … these animals were ridiculously huge, and yet all they ate were leaves.”

Nothing about them looks real even in person.

Do you have anything to add to this conversation?