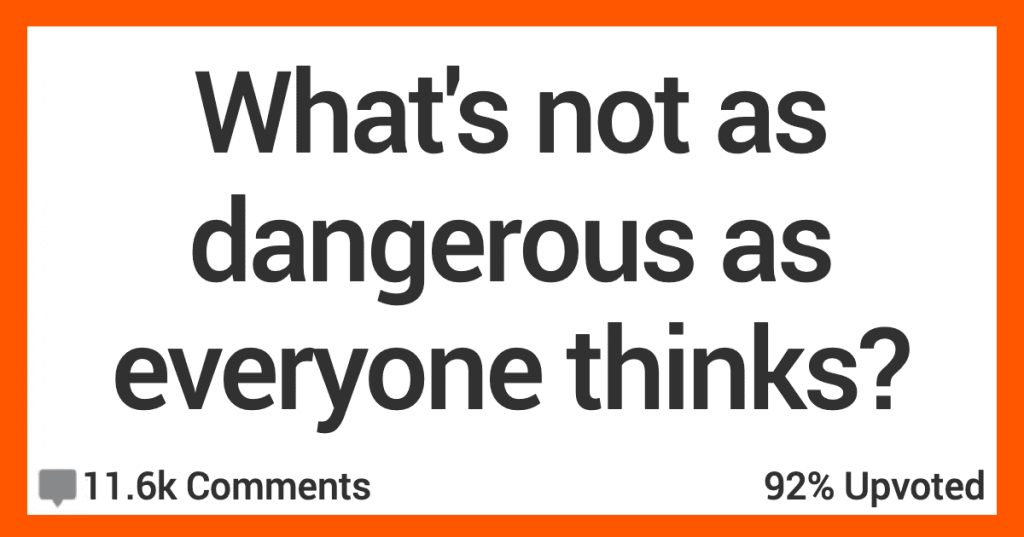 Pssssshhhhtttt, don’t even worry about it!

Okay, maybe I’m being a little too flippant (and totally unspecific), but a lot of things out there really aren’t as dangerous as everyone thinks they are, right?

Here’s what people had to say about this on AskReddit.

93% of all snakes are pretty much harmless.”

“Eating most foods right after their expiration date.

Some people really think the milk knows what date is written on the side.”

“Stranger Danger… over 90% of kidnappings, m**ders and r**es, the victim knew the perpetrator.

And yes, I also teach my kid about stranger danger.”

Nobody is putting razors in there, and there is no way people are giving out drugs for free.

Aside from the multiple studies that show both are non-existent, do you really think people would give out drugs for free to non-potential costumers?

It’s not going to erupt any time soon and it’s constantly being monitored.”

6. The most important meal!

41 F here and I remember having that drilled into my head from doctors, school, ads and parents about how important breakfast was.

Now I hear about is intermittent fasting and all the health benefits of that. It’s just amusing to me to see the shift.”

Hopefully they get fusion sorted out soon.”

Yes sharks do bite people but that doesnt mean you should commit shark ge**cide!

“Being in the military.

Most jobs in the military are just regular jobs.

It’s about as dangerous as any other office job.”

Getting bit by one is very unlikely to k**l you, but makes you feel like you have the flu for a few days.

It takes a LOT to get one to bite you. My entire garage was infested with them back 5 years ago. Everything below knee-level was black-widow territory.

I had those things crawling over me left and right. I never got bit by any of them, but I did get nailed by a scorpion 4 times and the doctor said it would be similar to a black widow bite.

With that said, don’t go messing with them just because some rando on the internet says they’re not as bad as people think…”

Only 3%-5% of v**lent crimes can be attributed to mental illness.

Meanwhile, people with mental illnesses are 10 times more likely to be the victim of v**lent crimes.”

I live in Pittsburgh and my relatives in rural Louisiana act like I live in Baghdad.

I feel safer here than in some places in said small town in rural Louisiana.”

Leave them alone, they leave you alone.

There are people who act like Floridians are practically walking into alligators’ mouths, but they don’t usually bother anyone so long as you don’t approach them, or feed them.”