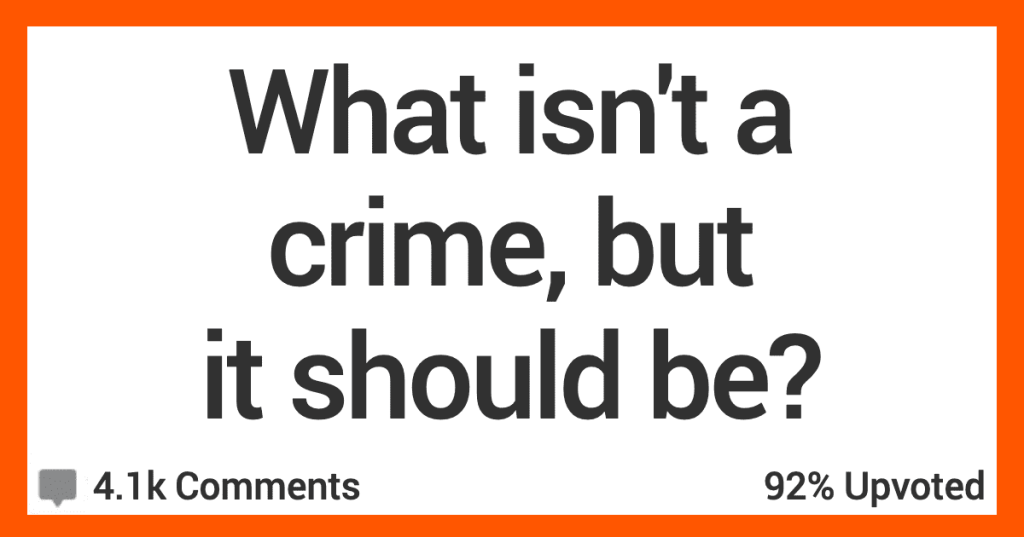 14 People Share Things They Think Should Be Crimes, but Aren’t

The world is an unjust place, there’s no doubt about it.

And it’s also true that a lot of things SHOULD be crimes, but they aren’t…

AskReddit users weighed in on this.

“Giving politicians. money should be illegal.

I’ll never understand why they need so much money to “campaign” you could just give everyone the exact same platform and a series of debates all paid for by tax money.”

This reminds me of medieval tax collectors who just took what they wanted, under the banner of the ruler.”

“Producing radio ads with horns and/or sirens in them.

No alarm sounds in broadcast media unless there’s an actual emergency.”

“Talking on speaker phone while in public.

We don’t want to hear your conversation.”

5. Think about the animals.

Also the docking of tails or cropping of ears for superficial, aesthetic reasons. And cat declawing.”

“Insurance being able to decline treatment recommended by a doctor.

I mean hello insurance people, you are not doctors.

Or at the very least it should be heavily regulated, to protect the kids and their money and not just let sh**ty parents take the profits while exploiting kids.”

And letting large amounts of tickets never go on public sale because they held them back for their own reseller business.

And allowing resales to be 5 or 10 times more than the face value.

And having exclusivity deals with venues so that artists who try to tour without using Ticketmaster can’t play most major clubs and arenas.”

“Getting married under the age of 18.

Delaware, Massachusetts, Minnesota, New Jersey, New York, Pennsylvania, and Rhode Island, which have set the minimum age at 18 and eliminated all exceptions.”

“Lying while in politics.

It’s so normalized that politicians lie, that we overlook the damage that it does.

And no, it is not required for the job. If we punish or remove the untruthful people, we’ll just get better leaders.”

It’s just slavery with extra steps and the only reason it’s not a bigger deal than it is because it happens to criminals.”

“The price of insulin in America.

Also the cost of eppi pens as well.

It’s almost like someone wants us to all die of treatable conditions.”

It’s incredible how people just made up an entirely new stupid vocabulary and use it while wearing suits and speaking in calm tones to obfuscate very clearly terrible things.”