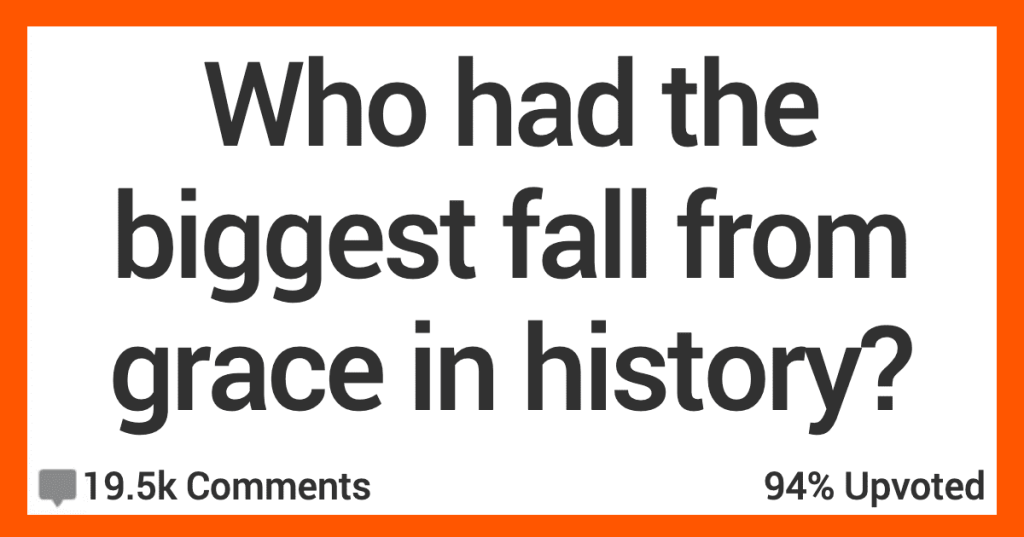 People of a certain age don’t remember what kind of reputation O.J. Simpson had before his life came crashing down in 1994.

But the fact was that he was seen in the public eye as a great athlete who was friendly and positive and he appeared in all kinds of movies and commercials.

Let’s hear from AskReddit users about who they think suffered the biggest fall from grace.

“Henry VIII has to be up there.

He was a famously handsome, pious, and noble young king, very in love with Katherine when they were married, and over time he became the wife-k**ling tyrant we know today.”

Went from the star of a prime time show to charged with child p**n and d**d in a matter of months.”

Fatty Arbuckle was an insanely popular silent movie star that had a contract in 1918 for $3 million for 3 years of films. (Equal to $54 million in 2021 dollars according to Wikipedia). An unheard of amount. In 1921 he had a party at the St Francis Hotel in San Francisco (still there) over the course of several days. Virginia Rappe ended up **ing, possibly from a ruptured bladder.

She (or friends, there seems to be different versions which is a problem with this story) accused Arbuckle of r**ing her. The newspapers went nuts, making up stories, spreading what little they had.

Arbuckle had multiple trials. But was ultimately acquitted. He was dropped by the studios. Hollywood reacted by hiring Will Hayes and forming a censor board. Many of Arbuckle’s films are lost because distributors and theaters would not play them.”

Started his career as a celebrated civil rights lawyer in Kansas. Followed up Brown vs Board of Education 20 years later and ended up forcing them to implement more fair educational conditions for students of color.

The guy was a revolutionary music producer, creating the Wall of Sound formula. He produced music for some of the top musicians in the 60s and 70s and retired very young to his mansion in the Hollywood Hills.

He also is responsible for some of the most infamous courtroom photos in history.”

“Harvey Weinstein went from being one of the most powerful people in the world, to be completely reviled, and losing everything.

This is the guy who had Meryl Streep and Oprah on speed dial, and married to a woman 1000x too attractive for him. He now uses a walker, has lost his fortune and his reputation.”

“Aaron Burr he was Vice President of the United States when he shot and k**led Alexander Hamilton in a duel. The duel k**led Burr’s political career—he was dropped from Thomas Jefferson’s ticket in the 1804 election, and he couldn’t even win an election for governor of New York.

In 1805, Burr plotted to invade Spanish territories and create his own empire—with a side plot to incite a revolution against the United States. In 1807, Burr was put on trial for treason, and he narrowly escaped a conviction.”

Felt slighted and overlooked by his contemporaries. Switched sides to the British, made no difference to the war effort. D**d in disgrace in England. His name is now a synonym for traitor.”

He originally stood up for civil rights then he became a cult leader.

From a civil rights leader to cult m**derer who was responsible for more than 900 d**ths.”

Ran for VP, getting ready to run for President, find out he had an affair and a kid while his wife was d**ng of cancer.”

“Charles Lindbergh deserves to be in the conversation.

After making the historic first solo transatlantic flight, and gaining the sympathy of many after the kidnapping and murder of his son, he promoted American neutrality in WWII. Though he reversed his stance after the attack on Pearl Harbor, many had already branded him a N**i sympathizer.

He eventually did rehabilitate his image, but after his d**th, it came out that he had 3 separate secret families throughout Europe. So I guess it’s a mixed legacy at best.”

“Most people are talking like the last decade, but Mary I of England came to my mind first. Overcame huge threats & obstacles to her right to the throne … because she had the support and love of the people. She defeated the attempted coup, ascended to the throne, showed mercy to the traitors, etc.

… then promptly married an unpopular foreigner and tried to force everyone to follow her religion. If they didn’t, they got burned alive. Then hubby skipped town anyway, and Mary slowly lost her marbles (and Calais) … and kept burning people alive.

History tends to remember her younger half-sister Elizabeth I a bit more favorably.”

“Jimmy Savile, if you allow for posthumous falls from grace.

Let me paint you a picture: Here is the ultimate “working class boy made good”. He worked as a coal miner during the Second World War. Once that was over, he tried a number of things: he was a professional wrestler for a while (lost every match), was a pioneer DJ (he essentially invented the job) and hosted a prime-time TV show well into his seventies based on the premise of fulfilling outlandish dreams for kids.

In his spare time, he worked as a volunteer porter at his local hospital and ran marathons, raising millions of pounds for charities – attracting a slew of honours. And while he may have been a bit eccentric, he was widely regarded as a national treasure.

That is, until a couple of years after he died. Turns out Jimmy had a thing for young girls. Quite a thing, as it happens – he made Bill Cosby look like the Angel Gabriel. We are talking one step below wandering around the TV studios where he worked with a 12 year old latched onto his p**is.

He’d got away with it precisely because of his public persona – he successfully persuaded almost all the girls he abused that nobody would ever believe them.”