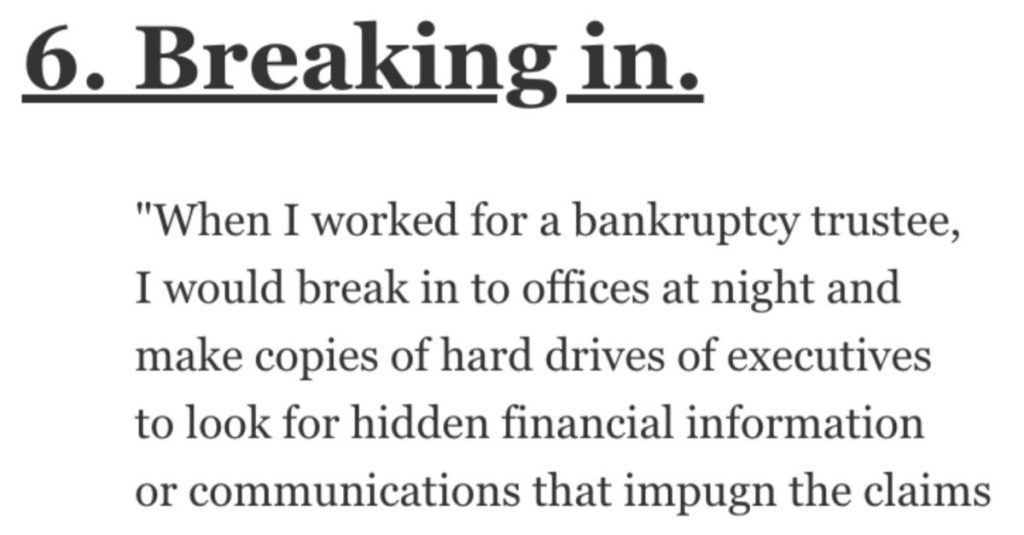 What Does Your Job Let You Do That Would Otherwise Be Illegal? People Responded.

Back in the summer of 2004, I spent five weeks working on the set of Batman Begins.

I was part of the catering crew and we had a small Gator vehicle that we were allowed to drive all over downtown Chicago to deliver food to workers who were scattered around blocks and blocks that were shut down by the police at night.

Let’s just say that if we tried any of those antics any other time, we’d be in big trouble.

But, hey, it was one of the perks of the job…and it was a lot of fun flying down those city streets in the middle of the night with no one else in sight.

Let’s hear from AskReddit users about what they’re allowed to do at their jobs that would otherwise be illegal.

“Go into privately owned businesses and walk out with equipment that costs tens of thousands of dollars without paying.

I repair and service specialized machinery.”

Breaking furniture, punching holes into walls stuff like that. When other people do it, it’s called vandalism and they get jail time.

People pay me well to hurt them.

I work for a surveyor and in the interests of legal property ownership, we are allowed to go into your property to investigate for property markers.

5. Go wherever you want.

“I get to climb water towers. Well that’s not a great example, I’m out of shape and scared of heights. But the view is amazing.

Also, I work for a utility company that has a pretty generic name. So when I’m wearing my uniform shirt, company name/my name, I can go just about anywhere I want.

Employees only? Authorized personnel only? Screw you, I’m with the utility company. Backstage at a concert? I’m just checking the plumbing.”

“When I worked for a bankruptcy trustee, I would break in to offices at night and make copies of hard drives of executives to look for hidden financial information or communications that impugn the claims made by corrupt debtors.

One time, I was sent into a huge networks operation center down in Miami. The trustee had coordinated with the head of security without the debtor-owner’s knowledge to secure my access.

I showed up with my laptop, tool bag, and flashlight, and the head of security handed me a security card and said, “This will get you access to anywhere in the building. If anyone asks you what you’re doing, you have them radio me.” It felt very covert, and was by far the most badass thing I did as part of that job.

Oh, and I found a locked QuickBooks file that we cracked and pinned the shitbag for embezzling a bunch of money while trying to stiff creditors. It was glorious!”

“It’s punishable by law to do anything to the outside electric meters, however, since I’m the maintenance guy, I occasionally have to remove them,cutting the tamper seal and replace the 100 amp breaker.”

“I have loads of THC oil in my closet and safe.

I make CBD product but before the oil is blended into a tincture or cream the THC content can be as high or higher than 4% which is considered marijuana.

I also have access to the state treasury, safe deposit boxes, and can technically write checks in anyone’s name.

If there is something I want to know about someone, I can find it within minutes.”

“Break down doors and access any property that may be on fire.

Also commandeer any vehicles as needed for the extinguishing of fire.

Never done either, though.”

“I get to stab people and take their blood.

I get to shove tubes inside of them.

I get to break ribs.”

Does your job let you do things that would otherwise be illegal?