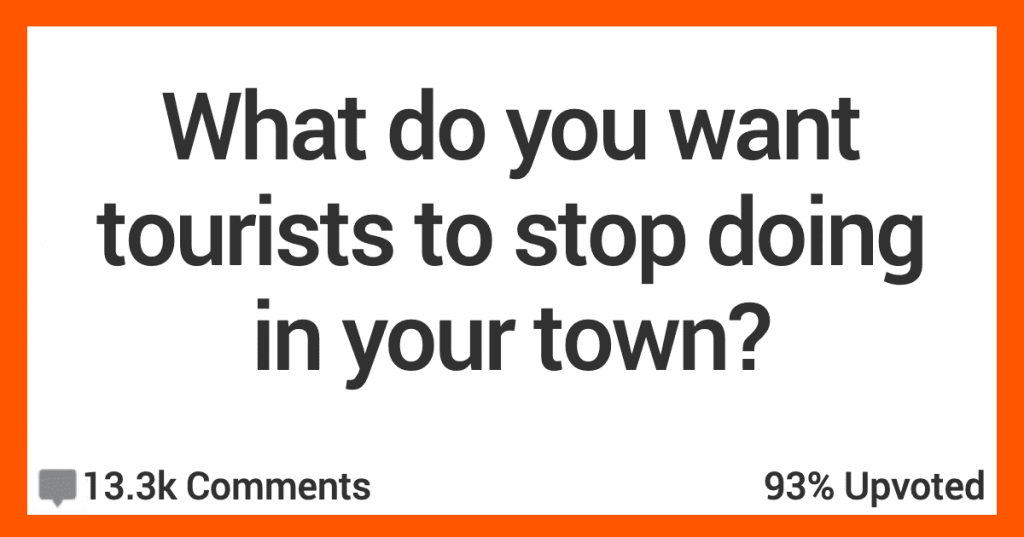 The closest I’ve ever come to living in a tourist town was working for three Mardi Gras in a row in New Orleans.

I spent about two weeks there each year working really long hours catering parties and events and it was pretty insane…and Mardi Gras tourists can be pretty obnoxious, as I’m sure you can imagine.

Let’s hear from people on AskReddit about what they want tourists to stop doing in their towns.

The worst is littering on the beach, which is thankfully pretty rare. I occasionally see someone put a c**arette butt in the sand. A lot are taken away when they leave, but the sand has away of hiding stuff, so a lot remain.

I’ll give you tourists one tip. Night swimming. If you put your keys, glasses, etc. down in the sand, they’re gone. Between the sand and the dark, you’ll never see them again.”

“Stop walking out into the middle of an active downtown street to take group pictures of yourselves in cheerleading outfits on the spot where Kennedy was shot.”

“Clean up your f**king trash.

I used to live in a spring break destination which was a small surf town.

After spring break, people would be cleaning up pounds upon pounds of beer cans, broken bottles, needles, used condoms…f**king revolting.”

Walking around like they’re at Legoland, blindly stepping into traffic, oblivious to the fact that people actually live here.

We use the bike to get to work, to get groceries, we’re not just aimlessly cycling around for the fun of it.”

“”Love locks” on bridges and fences. they are ugly, and can cause serious structural damage issues because of the weight.

In most places either the authorities or just locals have to regularly cut them off and thrown them out.”

“St. Patrick’s Day in Chicago when they dye the river green.

We had tourists stretched across the sidewalk taking photos with selfie sticks. I eventually had to gently physically move them since a massive crowd was forming and they wouldn’t let anyone through.”

“Just respect the land! Clean up after yourself. Be very careful about making and extinguishing your fires (because forest fires!). Don’t dump garbage, fuel, gray/black water in ditches.

“Deciding they like it so much here that they are going to purchase our homes for over market value so they can turn them into AirBNBs.

And in turn, pricing the locals out of ever owning homes in their own town.”

“I live in Florida.

And stop feeding them!”

“Stop being a belligerent a**hole just because you’re in “N’AWLINS.”

It’s still not an excuse to get blackout d**nk, litter, and make hell for food service workers.”

“I live in Berlin and this goes for German and international tourists: please don’t run, take selfies, play hide and seek or sit on the Holocaust memorial.”

“Las Vegas- whether it’s your first time here, or 13th time here. A convention, a weekend getaway, a bachelor party- whatever.

Remember to be a decent f**king human being. Sin City does not mean ‘lawless city’.”

“In New York, if you visit, please walk on the right side of the side walk not the left.

Also, if you need to stop and look at your phone or have a conversation with your fellow travelers, step aside. People are walking and if you abruptly stop it usually results in someone bumping into you.

Also, do not walk like 5 people side by side and walking slowly. People can’t get around you. It is infuriating. But, please keep visiting NYC!”