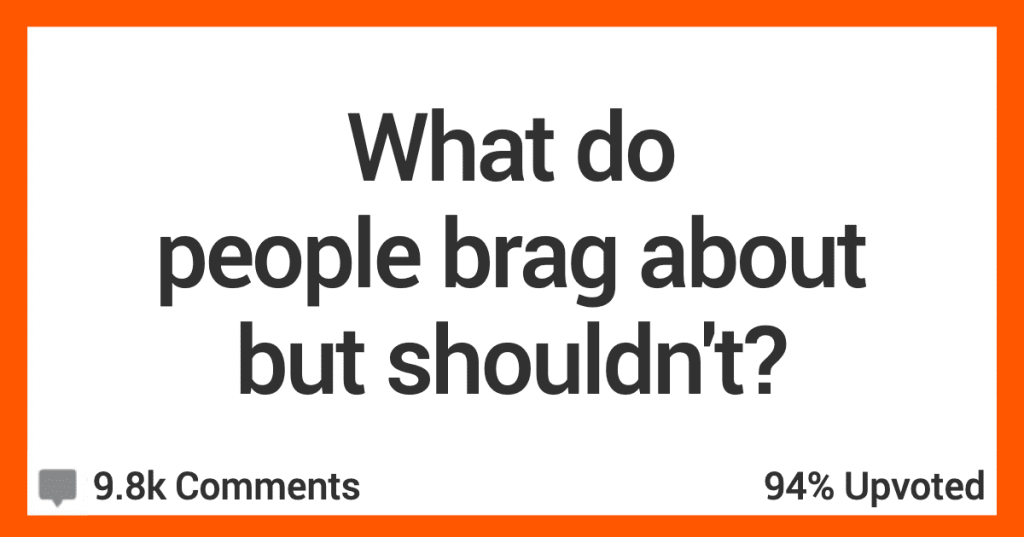 One of the coolest things about human beings is how we have slightly different perspectives on the world. That can be great when you’re looking to expand your horizons or try to understand another way of thinking.

It can be pretty cringe, though, when someone flexes about something you consider to be downright despicable – like these 13 things, which people say definitely aren’t something to brag about.

12. Setting yourself up for failure.

Smoking/Vaping as a teenager.

I worked with a woman who told the break room she only drank water if it started to hurt when she peed.

Ummm. Maybe drink water and you wouldn’t have that problem?

How little they know. As a teacher I see pride in ignorance all the time.

9. They’re supposed to be learning.

“half of my students fail”

I had a professor who graded everything on a perfect bell curve. Every assignment

And the lowest 6% got Fs

Didn’t matter what your actual grade was, just your score in relation to your classmates. I scored 93/100 points on exam 1 and got a C

What a great person they are.

If you have to verbalize it, chances are you’re not as great as you think.

7. Survival of the fittest.

Not being able to do basic tasks. “I can’t even boil water, I’m so quirky!”

No, you’re not, you’re a disappointment.

Cheating. No quicker way to out yourself as a complete piece of shit than bragging about how much d*%k / pu$$y you’re getting on the side.

She thought the whole situation was hilarious. I didn’t text her after that.

People should be discouraged from bragging about how uneducated they are. The fact that you don’t read books, don’t like school, or did poorly in education is not something to take honor from.

The amount of people who tell me they don’t read books is astronomical. The prompt for telling me that? Me, minding my own business reading a book. Strangers feel the need to enlighten me. I do not understand why.

“If YoU cAnT hAnDlE mE aT mY wOrSt, ThEn YoU dOnT dEsErVe Me At mY bEsT”

Translation: no-one can (or wants to) handle the ‘worst’, so there actually is no ‘best’.

3. Literally no one cares.

Penis size, because usually it’s a guy bragging to other guys and I mean if that’s your bag all power to you but I’ve had more conversations with Insecure dudes about their d*%ks than I’d like.

And they always say “OK I’m just kidding it’s average”. Like I give a f**k, save it for the bedroom.

How much anything cost. Former brother in law bragged about how much his clothes cost all the time. I couldn’t help myself.

We were at a reunion and he was bragging to someone else about his nice leather coat that cost $600, and I just had to point out that he could have put that towards his truck payment and it wouldn’t have been repossessed.

I would definitely be cringing if I heard someone bragging about these things in public (or private, for that matter).

What’s the most awkward flex you’ve heard from someone? Tell us the story down in the comments!