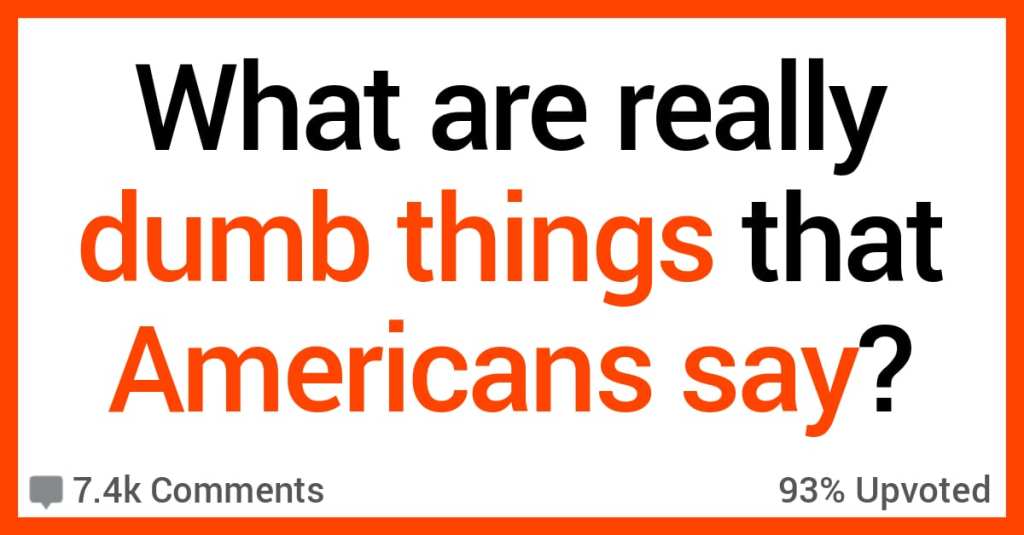 I know that every country on Earth has really dumb people, but there’s something a little more hilarious about American stupidity for some reason.

Well, at least that’s the way I feel about it. And yes, for the record, I am an American.

So let’s laugh at ourselves, shall we?

Take a look at these shining examples of when Americans didn’t sound very bright.

Do you agree with me?

”USA is less racist than those Scandinavian ethnostates” from ShitAmericansSay

I mean, have you heard about all those awful doctors in Canada?

But your doctors are imbecile from ShitAmericansSay

Just got an awesome history lesson. Thanks!

"In no universe does 40 relate to high" from ShitAmericansSay

5. She is totally right on this one.

Not to mention brilliant!

Why don’t other countries like Canada and Europe fly our flags? Don’t they have a little bit of gratitude towards us? from ShitAmericansSay

7. You sound pretty stupid, my friend!

"no one says today is 14th of march…" from ShitAmericansSay

my ancestors are AMERICAN and they came from AMERICA from ShitAmericansSay

9. God, I really love it when this happens.

And it happens more often than you’d think!

Norwegian flag taken down from ShitAmericansSay

North American? Drake is from Canada,it’s up North but not American from ShitAmericansSay

Are you 5-years-old? Also, you’re wrong.

"We invented cars, we get first pick" from ShitAmericansSay

“I find myself educating the locals…” from ShitAmericansSay

13. You just can’t handle our freedom.

Love it or leave it! You got it? Okay, good!

"Look, not everyone can handle the freedom but that’s nothing to be ashamed about" from ShitAmericansSay

In the comments, tell us about the dumbest things you’ve ever heard people say.

We look forward to it! Thanks!