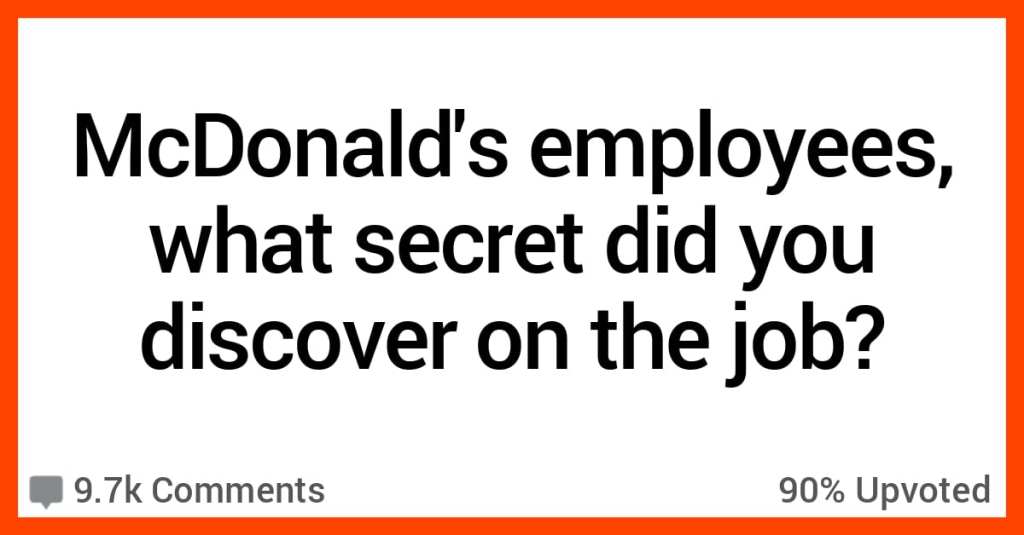 Ugh. I just brought you back to your youth, didn’t I?

There are some “secrets” that are specific to certain places, though, and if you’re someone who enjoys a trip to McDonald’s now and then, you might be especially interested in these 14 tidbits.

I remember working the grill, it was a point of pride to get fast at it:

It’s been 15 years since I worked there and I could still do it with my eyes closed. McDonalds trains their kitchen staff to be as efficient as a damn assembly line.

Dehydrated onions, you put them in a metal thing and just add water

The thing is they still taste great! But I was shocked and happy that I didn’t have to go cut onions.

Those onions can be turned pink if you use hot water instead.

not really a secret but when I’m on wrap (wrapping the food) n i get nuggets i might slip an extra 2-3 because i like the thought of someone getting hype over an extra nug or two.

I had a complaint once because they found 10 pieces of nuggets in their 9 piece nugget box.

They complained they didn’t have enough sauce for the extra nugget and demanded an extra sauce as well.

We were dumb founded.

Back when we had the old cheeseburger buns, before McDonald’s “got healthy” we used to scrunch up the buns and deep fry in the Fry vat.

Covered them in sugar, and you end up with something tasting like doughnuts.

I started working at McDs when I was 15..

The secret is that it’s probably one of the cleanest restaurants in your city.

The standardizations and routine practices leave little room for employees to think for themselves.

It was a way cleaner restaurant than the 30-50$ per person place I would work at later.

Man, reading these I am wondering why my McDonald’s was so boring.

We didn’t spit on anything, the stuff that needed to be kept clean was kept clean (if it wasn’t required it would be filthy).

The ice cream machine worked fine, food wasn’t undercooked (on occasion it was over cooked).

Employing High school kids of course they are gonna make some mistakes, but nothing too bad.

The big mac is just a double cheese burger with 1000 island dressing, lettuce and an extra piece of bread.

if you order a double add lettuce and big mac sauce, you get the same thing with less bread and cheaper price.

7. Good stories are the best.

My time wasn’t bad. We kept it clean, and no one I know ever tampered with the food.

But there was a lot of funny things that happened, so I have a lot of stories.

Example: one day, we had 10 minutes to close. It was myself off at close, the grill closer, the service closer, and the manager. Grill closer had on a head set, as he was praying no one else came in as he was very low on a few things and didn’t want to make more right before closing. This guy prided himself on having things done and being out the door within 10 minutes of closing (bosses loved him because other closers took up to an hour, and that meant paying them for up to an hour).

One thing to know: our headsets had two buttons. One talked to the other headset only, the other talked to the outside speaker. He had been playing a game where he was trying to make the service worker laugh while she was taking the orders. You probably see where this is going.

So a driver pulls up to the speaker. He orders a 20 piece nugget. Closer is pissed, and pushed the “talk to other headset” button and goes “man, fuck that stupid fucking order. Fuck!”

Except, of course, he hit the wrong button.

Needless to say, someone got a free 20 piece, and another free meal in the future, and grill members were banned from wearing headsets for a while after that.

I worked at McD in high school. This was the 90s. The store I worked at had incredibly high standards. I was taught proper customer service skills, how to de-escalate a situation, time management, cleaning skills, people skills and so much more. I thrived there bc I was lacking adult role models anywhere else in my life. My managers made sure I was caught up on my homework, helped me study, made sure I was eating-even though it was fast food it was better than no food. I made some of the best friends I’ve ever had and am still friends to this day. I can truthfully say working there saved my life in high school.

McDs has a very thorough training program for managers. I was fast tracked to management and at 18 they put me through Hamburger University (the McDs training site in Illinois). That was quite an experience.

I ended up leaving McDs at 19 to go be a young adult and try a new jobs.

I don’t have any “trade “ secrets to share really. I’ll just say this. Don’t knock the kids/people working fast food. Don’t make fun of them, laugh at them or make them feel bad. They are learning valuable skills that will serve them well later in life. They are doing what they can to earn money. They’re serving you the junk food you want while learning how to grow up to be a successful adult. Sure, not everyone fits this description, but more people do than you think.

During this time, they changed the bacon. The new bacon isn’t as good.

During this time, they changed the shake mix. The new shake mix isn’t as good.

The shake machine works just fine, so long as someone remembers to fill it before it gets too empty and goes into automatic 90-minute self-clean mode. It also takes a VERY long time to start up, so if someone forgets, there’s no shakes for 30 minutes. This was never a problem for me – whenever I did opening shift, I’d kick off the coffee brewing for my team, then start up the shake machine for myself.

The chocolate chip cookies and McGriddles taste AMAZING if you eat fresh out of the oven. Always made an extra half tray for myself.

If you’re ordering a meal, say the size first (Large Number 1 with a Coke). Everyone knows that ordering the meal is cheaper than getting that same sandwich, fries, and drink individually, but here’s the secret: The POS has a button for the large #1 and a different button for the medium #1, then another menu for the drinks.

So if you say “I want a #1 with a Coke,” I can’t hit any buttons until I know the sizes of the meal (the size of the fries), and the size of the drink.

4. So many cool tidbits!

10 to 1 Burger patties. Every 10:1 is a tenth of a pound of beef. These go in most of the smaller burgers. A McDouble and a Big Mac have the same amount of beef to them. The difference between them is the Mac Sauce instead of ketchup and mustard, the middle bun, sesame seeds, and lettuce. The difference between a Double Cheeseburger and a McDouble is 1 slice of cheese.

McRibs are the messiest sandwich we had to make. In addition to cooking it, the McRibs stewed in their sauce in the Universal Heating Cabinet (UHC) until used. That required a special pair of tongs because it was pork and cross contamination applies to religious stuff as well. No matter how careful you were, you always made a mess.
Burrito mix came precooked and frozen. You wrapped a slice of cheese with the stuff and it was put in a “queuing oven” which was a glorified microwave until hot. That’s it. No real cooking done.

Breakfast breads was the easiest backend position during breakfast. Things just took time. McGriddle buns were baked frozen then thrown into the queuing oven to make them soft. Biscuits were queued then baked. Bagels and muffins were toasted.

McDonalds uses beef fat iirc for their fryers. When the oil was new, it was literally white until it got hot. A patch of sweet tea took 5 pounds of sugar for 5 gallons of tea. You can feel the cavities as you made it. Grilled Chicken took the longest to cook and was kinda a pain. Some breasts could be in the UHC for hours before finally tossed.

3. This is all very heartening.

For the one I worked at in high school.

Burgers are kept in a warming area for no more than 15 minutes then thrown out and new ones are made.

You get a free meal from anything except the salads. Meal is a sandwich, medium fries and a medium drink.

At the end of the night all the cooked meat is thrown out. If you want you can use it to make burgers and take them home with you.

Specific tools and grill section for cooking chicken vs beef to make sure they don’t cross for those customers who don’t eat beef. The Hindu coworkers were very vocal about this rule if you worked the grill.

2. Take this home to your own kitchen.

I can never forget working breakfast.

Those sandwiches need to be cheese, then meat, then egg.

If the cheese is next to the egg it makes the egg slip out.

1. Urban legends are just that.

anyone who says they messed with food was lying, unless it’s something boring like, “we left patties in the warmers too long”

One thing I was SHOCKED by (this was pre-internet forums being widely used so it was just info from people working there) was that no burgers are flipped. you put your 10:1 patties or 4:1 patties on the grill and hit a couple buttons and a second grill comes down and both sides are cooked for you. I loved scooping a big tower of them off the grill to plop into the warming trays.

Also I worked in one in the desert and sometimes our AC would crap out but only for the back!? so you’d be sweating over the stupid grill and your coworkers would be hiding in the freezer

Some of these are for sure more surprising than others.

What’s your greatest secret from your time at McDonald’s? Our comments are open!