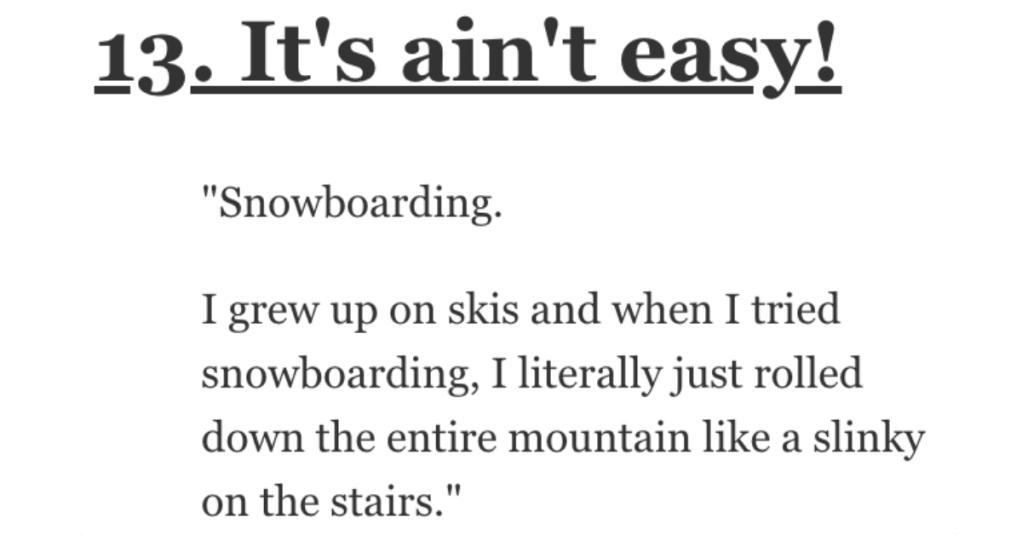 You’ve probably been caught flat-footed trying something new in your life at least once…or maybe way more times than that if you’re a risk-taker and even a little bit ignorant.

Hey, we all live and learn, right?

But sometimes, you have to learn the hard way.

Folks on AskReddit talked about what they thought would be easy until they tried it.

I was like yeah I smoke and drink but I can definitely run like the wind. Ha, no.

Quit smoking after my first run and am now 3 years smoke free!”

The jump from not being able to play anything to playing basic chords and a couple songs you like isn’t that much and it makes you feel like such a bad*ss. But the jump again to a working musician is astronomical.

I tried and just got burnt out and it wasn’t fun anymore.”

“A lot of the parts from that Ninja Warrior show. I’m a very physically fit guy and always thought that first course looked like a breeze.

Then I found a local gym with the different elements set up. Even just that very first part where you hop across a few platforms was tough.”

When I was still in college, I’d either procrastinate way too much or I’d work nonstop.

I was never able to find a balance where I was still getting sh*t done but not burning myself out.”

5. Harder as you get older.

I understand it’s far easier as an adolescent but, whew, conversational German for a English speaker is very hard for me.”

“Making (and maintaining) friends as an adult.

I never really put much thought into this, until I had no friends left in adulthood, and realized how easy it used to be as a kid in school in comparison.”

“I am not a really confident person but I keep working on my confidence.

There was a time when I tried the “fake it until you make it” approach.

Faking it is harder than expected.”

I made a couple of very small, cr*ppy bowls on the wheel, but the thing I made the best and far more often was a giant mess.

I can sculpt fine but those stupid bowls get me.”

“Socializing with a group of people I usually wouldn’t hang out with.

It’s either that or I stay alone forever…but I just can’t find any sort of relatability to these people.”

“On the first trip to England…

After renting a car, it proved to be a considerable challenge to drive on the “other side of the road” from what I was used to – especially in the roundabouts and on major highways.”

Doing the job physically itself, I have no problem with.

Mentally, it’s the drain of bad management and feeling like you’re wasting your time.”

“Throwing dough to make pizza.. and pretty much the rest of the pizza making process.

Getting the dough into a round 18″ pie is tricky. Then getting the sauce even and not on the crust is a process. And getting all of it done as quickly as possible…

After several hundred pizzas I can crank them out pretty good now though.”

I grew up on skis and when I tried snowboarding, I literally just rolled down the entire mountain like a slinky on the stairs.”

14. Looking for the right one.

“Falling in love with the RIGHT person.

My mom used to tell me to be careful who you date because you can fall in love with anyone.

Fell for many frogs before my hubs came along and we’re close to our 13th anniversary.”

What did you think would be easy until you tried it?