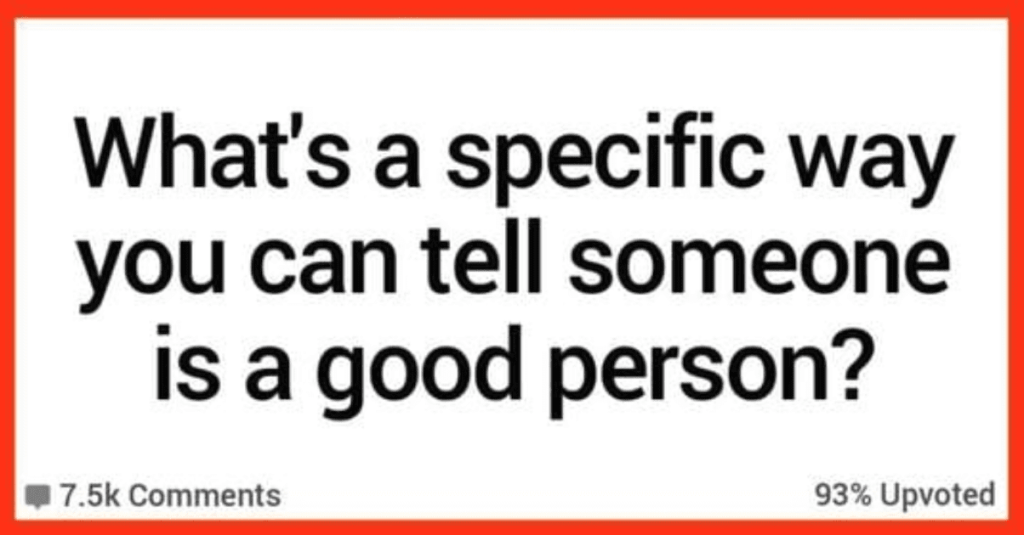 People can do a pretty good job acting like they’re nice, normal, and good, but the truth is, there are plenty of people who are really good at faking it.

If you’re watching closely, though, sometimes you can pick up on the little things – like these 14 specific acts – that can tell you exactly who you’re really dealing with.

Once I was telling this guy a story.

He was listening with all his attention. 2/3 of the way through I realized I had already told it to him and asked him why he didn’t stop me.

He said “you were having so much fun telling it”. That is an extra nice person.

I felt a bit foolish but he made me feel like he just genuinely cared.

13. Because someone has to pick it up.

If they are working on something and drop small trash (bits of paper, tape) they pick it up and throw it away

12. Trusting other people not to be awful, too.

Not stealing money you find.

A lot of people in my family have found decent amounts of cash that people have misplaced and returned it. I just would feel terrible if I lost up to a paycheck in cash and someone just swiped it.

My cousin, when he was a preteen, lost his wallet in Walmart and it had the money in it to buy him a Nintendo Wii or something when they were brand new.

My uncle had basically told him too bad, so sad. And when they got home, my aunt was so livid with my uncle. She drove back to the store with my cousin and Walmart made an announcement and the wallet and all the cash was returned.

They don’t ruin your jokes.

And that’s a big one.

In social settings, they notice when someone is kinda left out and they find a way to include that person in the conversation or whatever fun is being had.

I remember when I went out with my older sister and her friends once when I was about 15. I was pretty shy and quiet. They were all chatting about other friends and in-jokes but one of her best friends would keep taking a few seconds to explain the background to these stories or jokes to me.

It was a small thing but it brought me into the group instead of sitting and listening to a bunch of stuff I didn’t ‘get’.

I endeavor to do the same whenever a new person is in a group with me now.

9. That’s definitely someone you want to keep on your good side.

My friend sends thank you notes to their dentist.

8. Especially if it needs to stay cold.

If they decide they don’t want to buy something, they put it back where they found it instead of just leaving on a shelf somewhere else.

7. And also makes the interruptor feel like a douche.

When in groups, someone interrupts you, and after they finish, that good person says ”X, you were saying?” showing genuine interest and compassion for getting interrupted.

When they find the credit card that slipped out of your pocket in a shady parking lot, they go out of their way to find you and return it.

They look engaged when you speak to them, and are patient if you’re struggling to explain something.

I’m so used to feeling like I have to “sell” my conversation points to hold anyone’s attention that someone actually asking me to expand more on my thoughts really takes me off guard.

4. Because what’s the hurry?

When you’re walking together and someone is slower, they match that person’s pace and wait if a crosswalk is ticking down until the next cycle.

It’s amazing how few people will do this, and how many will simply keep going, not noticing that someone else has fallen behind.

3. They’re comfortable with themselves.

When conflict arises, they seek peace by being introspective.

In addition, they seek to resolve the dispute directly with that person as opposed to gossiping or triangulating.

The shopping cart is the ultimate litmus test for whether a person is capable of self-governing.

A person who is unable to do this is no better than an animal, an absolute savage who can only be made to do what is right by threatening them with a law and the force that stands behind it.

The Shopping Cart is what determines whether a person is a good or bad member of society.

They clean up the table to make it as easy as possible for a waiter/ waitress.

I’m definitely going to be keeping my eyes open from now on, just in case.

And maybe I’ll try to do a few of these acts myself. You know, just for some extra points if I need them some day.

What traits do you look for? Share those with us in the comments!