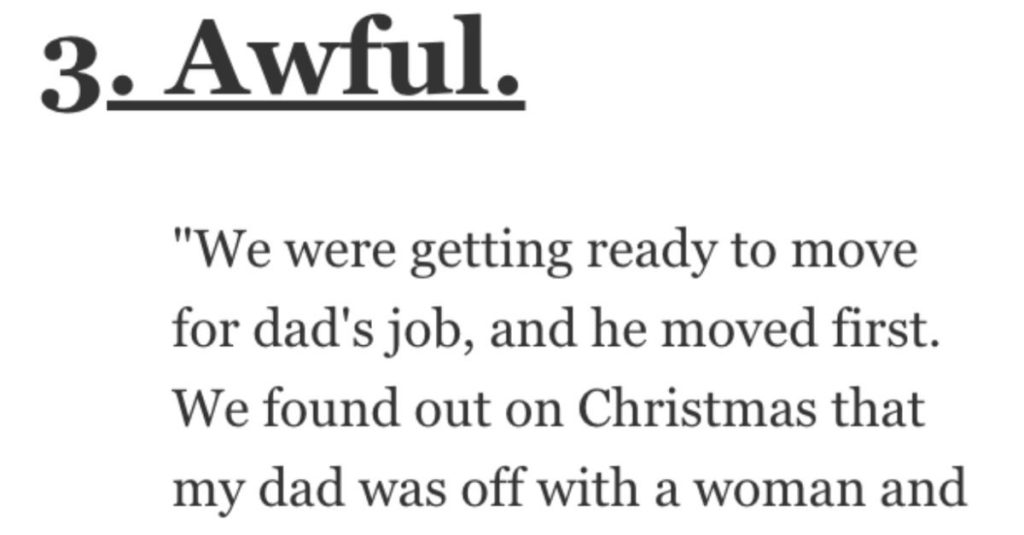 The responses you’re about to read from people are probably gonna bum you out, so let’s just put that out there.

Because anytime you hear about cheating in a marriage, it’s sad…especially when one of the people cheating is one of your parents.

Check out what these folks had to say about how their lives changed after they learned that one of their parents was cheating.

“My dad cheated on my mom when I was 18. We found out when text messages meant for my dad were sent to my brother (from her) by mistake! It’s been 10 years, and I still haven’t gotten over it.

She was my mom’s friend, and I was really close to her daughters. I have major trust issues. My dad and her just got married. It was super awkward when they vowed to be faithful to one another when they weren’t faithful to their previous spouses.”

“My mom cheated on my dad with his brother, and now I have a brother/cousin.

Our ancestry results show that he is a full brother because of how close our DNA is. My sister and I still love him like he’s full blood, though.”

“We were getting ready to move for dad’s job, and he moved first.

We found out on Christmas that my dad was off with a woman and her kids.

What really broke me: Money was tight, and he bought her kids Christmas presents, and I got nothing. Now, I find myself attracted to douches, and I can’t see marriage for me at all.”

“I was a kid in the ’90s and begged my parents to get the internet when it first came out. We eventually got AOL, and my parents used it to chat with others their age. My dad used it to find his now wife. My mom found out he cheated by finding lipstick smudges on his work shirt and smelling her perfume.

My parents divorced when I was 12, and for a while, I blamed myself for their downfall. I later found out it wasn’t the first time my dad did something like this, but I couldn’t help but feel like I f–ked up the family.

For a long time, I resented my stepmom because she was the other woman, but I know both of my parents are happier now than they were trapped in a failing marriage.”

“My dad cheated on my mom. I was 11 when the phone rang one summer day and it was a man asking to talk to my mom. My mom sent me outside so she could talk to him. Turned out it was the woman’s husband telling my mom that my dad was cheating with his wife.

My mom would have done anything to make it work, but my dad chose the other woman. He left, and I was mad at him for a very long time. I refused to meet the woman until after my mom died and my younger sister had to move in with our dad and her.

I was away at college. They eventually married, but my dad d**d six years ago. Never in a million years would I have imagined the only parent-type person I’d have left in my life would be the other woman.”

“I found out my mom was talking to someone she met on Instagram, and when I confronted her, she made me feel guilty for trying to take away the only person to make her feel special.

She brought up a bunch of stuff about how my dad was unfaithful, which I had always suspected but had no proof. I told her to stop ’cause if he found out, it would be bad for everyone.

Fast-forward to Thanksgiving of that year when he did find out and woke me up at 4 a.m. to scream and yell at me about what my mom was doing. I spent the early morning hours sitting outside of my house in the cold while he was screaming in the house at her.

Once he left, she swore she would get a divorce, but that never happened. He ended up blaming me for not wanting to get in the middle of their drama, and we spent a year walking on eggshells around my dad to not piss him off, even though every night he would read all of the messages and start screaming at her in the middle of the night.

The kicker was at this same time, he was having an affair with his high school girlfriend, and I found out that she was not the first person, just like my mom said. In the end, I lost all respect for both my parents, because they decided to stay in their toxic marriage, because it was convenient and they didn’t want people to gossip about them getting a divorce.”

“My father cheated on my mother, which ended in divorce. I was 8, my sister 11. Since then, my dad has proceeded to get married another three times. He cheated on two of those as well. Somehow, the third is hanging on, but we’re not sure how.

It devastated my childhood. I cannot stress enough how much divorce wrecked our family. My parents can barely stand to be in the same room as each other. I remember going to custody court regularly for years trying to get things worked out. It was awful.

So, thanks for that one, dad. Hope he learns to keep it in his pants one day.”

“My family were very conservative Christians.

When I was 7, my mom discovered my dad had been having affairs with other men. They quickly divorced, but I didn’t find out why until a few years later, shortly after I realized I, too, was gay.

On the one hand, his actions deeply hurt my wonderful mother. But on the other hand, I had sympathy for him since he was under so much pressure to hide who he was and to marry a woman.

To his credit, he was a great dad, never once said an unkind word about my mom, defended her when I complained that she wouldn’t let me do this or that, and constantly told me how wonderful of a person she was.

He passed away last year, and now, I’m just sad he never knew the happiness of having a normal, healthy relationship with another man, like I have.”

“Last year, my 27-year-old sister and I happened upon a text conversation between my dad and his girlfriend of 1.5 years, while he was in marriage counseling with our mom.

We logged into his email and found countless grocery, flower, and hotel receipts and Facebook comments. We printed it all out, made a color-coded folder and presented it to our brother and mom, then confronted our dad together.

Flash-forward almost one year later, our dad is back together with the other woman before the divorce papers have even been printed, and we barely speak to him.”

“My mother cheated on my dad for over a year with her high school sweetheart after they’d reconnected at their high school reunion.

She’d been going on legitimate business trips — where he’d meet up with her, and they’d spend time together. My dad put two and two together just before I started high school, and they decided to get a divorce literally the night before my first day.

They weren’t planning on telling me, though, until it had been finalized. They tried so hard to keep me in the dark, but the constant shouting matches, crying, and fighting had gotten so bad that I eventually yelled at them: ‘Just get divorced already!’ And that’s the only reason I found out the truth. My mother moved out a month later and married my stepfather less than a month after the papers were signed.

It took me six years to have a civil conversation with my mom, and to even have the barest relationship with my stepdad. I leaned so hard into supporting my dad that I excused his own faults in that marriage

. Like, they were truly terrible for each other. It’s been 15 years now, and I can definitely say it’s worked out for the better, but god, it was the worst f–king thing to go through as a teen who had her own s–t to deal with.”

“My dad cheated on my mom while I was growing up. My mom was constantly unhappy. I grew up wishing they would get divorced so my mom could be happy. I was so young that I didn’t understand adult situations.

They truly did love each other, but they had weird ways to show it. My dad’s constant infidelity, and my mom playing get back.

Seeing how unhappy my mom was in her marriage made me vow to take marriage and long-term relationships seriously. I did cheat on past partners, but it was when I had one foot out the door. That was no excuse on my part honestly. I have never dated a man who was separated. He has had to be divorced.

If and when it’s meant for me to get married, I will take those vows seriously. If I feel like I want to cheat, I will just leave.”

“When I was 13, my mom was cleaning my dad’s home office and stumbled on letters and notes with his girlfriend. They divorced shortly after, and my dad ended up marrying that same woman. After they divorced, I tried having a relationship with my dad, but he seemed to only care about his new life.

After years of canceled plans and being looked over, we stopped speaking at all. What bothered me the most about everything is that my dad still takes no accountability for any part. He’s always blamed my mom and I; we drove him to cheat.

I’m married with kids now, but I would be lying if I said I didn’t worry about my husband cheating. I guess growing up, I didn’t understand unconditional love. I’m always checking in with my husband, making sure he’s happy.”

“My father cheated on my mother multiple times.

She was always so miserable, usually taking that misery out on my brother and me, making our whole house unbearable.

They finally divorced when I was 12. It’s impacted my life because I can’t truly trust anyone. It’s always a thought in the back of my mind.”

“My dad had numerous affairs, the most significant being with my babysitter. My mother found out when I was 8. They discussed divorce, then got back together ‘for the sake of the children.’ (Eye roll.) He continued the affair for 14 years before my mother found out again.

He’s with the babysitter now, but has cheated on her, too. I answered the phone at his place to some woman. He told me, ‘We don’t need to tell babysitter about this, do we?’

It has affected me in that I don’t know what a healthy relationship looks like. I became more aggressive than is healthy. I was exposed to adult themes and language from too young an age.

I suffered neglect as a child and a very hostile home environment, but I think it’s made me very affectionate and kind to my own family. I tell them I love them every day, something I’ve never heard from either of my parents.”